4th Lawyer Linguist virtual event. Access to Justice for Deaf Sign Language Users. Medical Dictionary. Dr. Robert Adam & Dr. Christopher Stone. 10 Ways Introverts Interact Differently With The World. Introverts and extraverts may seem the same on the surface, but if you look at the way they respond to life’s everyday occurrences, differences begin to emerge. 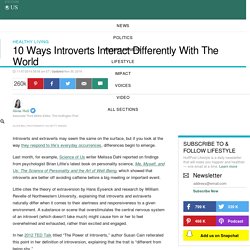 Last month, for example, Science of Us writer Melissa Dahl reported on findings from psychologist Brian Little’s latest book on personality science, Me, Myself, and Us: The Science of Personality and the Art of Well-Being, which showed that introverts are better off avoiding caffeine before a big meeting or important event. Little cites the theory of extraversion by Hans Eysenck and research by William Revelle of Northwestern University, explaining that introverts and extraverts naturally differ when it comes to their alertness and responsiveness to a given environment.

BBC Radio 4 - The Listeners, Series 2, Episode 1. The density of interpreters: estimating BSL/English interpreter to Deaf servi... Document. First Class Graduate wins prize... - The Bip. A graduate from the University of Wolverhampton is celebrating after landing a prestigious award on top of her First Class degree. 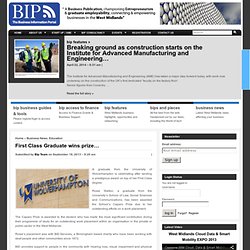 Rosie Walton, a graduate from the University’s School of Law, Social Sciences and Communications, has been awarded the School’s Caparo Prize due to her outstanding efforts on a work placement. The Caparo Prize is awarded to the student who has made the most significant contribution during their programme of study for an outstanding work placement within an organisation in the private or public sector in the West Midlands. De versus code. As part of a bigger project I’m hoping to get stuck into later in the year, I updated my tabular comparison of different interpreting Codes of Conduct/Ethics from the fields of both conference and public service interpreting in both spoken and signed languages. 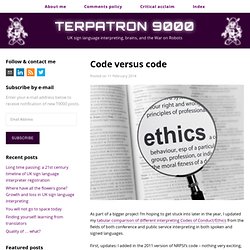 First, updates: I added in the 2011 version of NRPSI’s code – nothing very exciting, mostly just housekeeping after the separation from CIOL and a new directive to actually respond to the complaints process. ITI also has a new 2013 version, which lost nothing from before but added several new things: they are now the only organisation to explicitly forbid price fixing, bribery and poaching work from other members. Real life shock.

SCICtrain. Roger Beeson British Sign Language Interpreter – A Personal Journey. My life as an interpreter has its roots in my childhood, growing up in a home where sign language was my parents’ language. 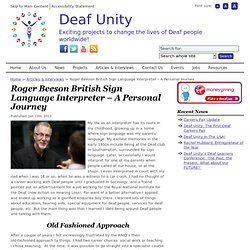 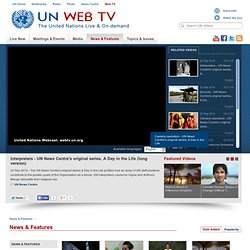 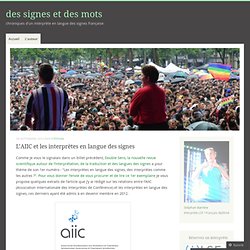 BBC Radio 4 - You and Yours, Access to Work. Why do we discriminate between signed and spoken language interpreters? Discrimination (mass n) Pronounciation: / dɪˌskrɪmɪˈneɪʃ(ə)n / 1. 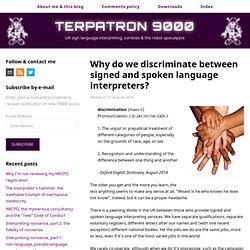 The unjust or prejudicial treatment of different categories of people, especially on the grounds of race, age, or sex 2. Recognition and understanding of the difference between one thing and another - Oxford English Dictionary, August 2014 The older you get and the more you learn, the less anything seems to make any sense at all. Interpreters and Emotional Intelligence. Details Published on Wednesday, 29 October 2014 10:20 Written by Diana Singureanu. 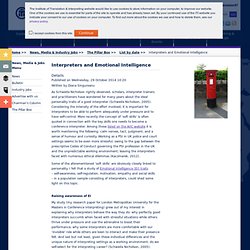 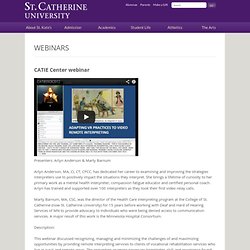 Sign and spoken language interpreting: a componential approach to skills deve... Lack of British Sign Language interpreters putting deaf people at risk. It is traumatic enough being rushed to hospital in an emergency, but what if you couldn't understand the doctors talking to you about what was wrong – and you woke up after an operation still not knowing the full story? 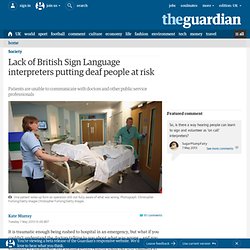 Professor Graham Turner: 10 key issues relating to the Access to Work crisis. While The Limping Chicken has made sure that Deaf people are appropriately stirred up about ATW, See Hear and William Mager have done the community a service by helping to drive this issue up the wider public agenda. Why consecutive learning is important? “Although I’m retired from the Commission now I still do a bit of training now and again and I sometimes get asked why students of conference interpreting on university interpretation courses spend so much of their time learning how to do consecutive interpreting when practically all the work they’ll do later as a conference interpreter- assuming they get that far- will consist of simultaneous interpreting..the difference as I’m sure most of you know being that consecutive (as the name suggests) is done after the speech, using among other things your memory and the notes you have taken during the speech to be interpreted whereas simultaneous is done in a soundproofed booth wearing head-phones while the speaker is talking..which is probably how most laymen see interpreters and also how most professional interpreters might see themselves.

Should students learn CONS before SIM? Dick Fleming is a former staff conference interpreter and trainer at the European Commission, Brussels. Top ten tips when communicating with deaf people.