The meanings and origins of Phrases, Sayings and Proverbs 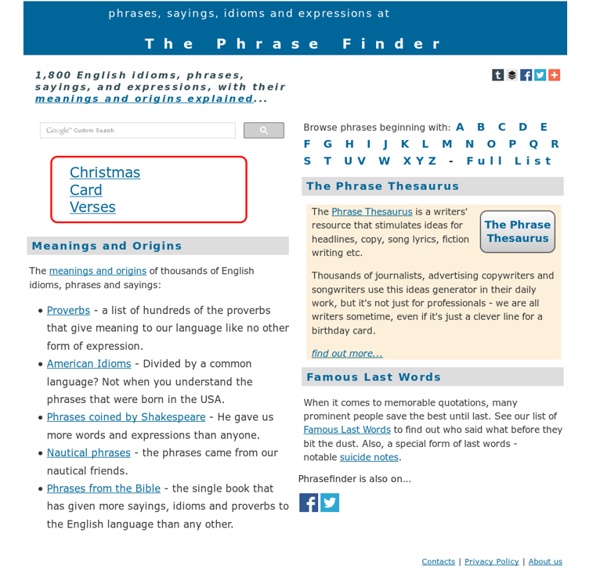 Etymologically Speaking... From the old Arabic word "hashshshin," which meant, "someone who is addicted to hash," that is, marijuana. Originally refered to a group of warriors who would smoke up before battle. Aaron White adds: You may want to explore the fact that the hashshshins were somewhat of a voodoo-ized grand conspiracy scapegoat cult (the very fact of their existence is impossible to confirm). They supposedly were a secret society (a la the FreeMasons) which was influential in every middle eastern court from Persia to Bangladesh. They were supposedly a brotherhood of assasins, devoted to their caballa and its secrecy, protected by an unlimited number of fanatical followers and unlimited material wealth.

The Tower of Babel << Home Page The Tower of Babel An International Etymological Database Project Participants (so far): The Russian State University of the Humanities (Center of Comparative Linguistics) The Moscow Jewish University The Russian Academy of Sciences (Dept. of History and Philology) The Santa Fe Institute (New Mexico, USA) The City University of Hong Kong The Leiden University The main goal of the project is to join efforts in the research of long range connections between established linguistic families of the world.

12 Horrible Gobbledygook Words We Reluctantly Accepted Just as there is nothing certain in this world but death and taxes, there is nothing certain in language but that it will change, and that people will react badly. One of the changes people find most offensive is the spread of professional jargon that has been coined to replace simpler, clearer words we already have. Anyone up for some collaborative incentivizing going forward?