28 of history's most fascinating photos 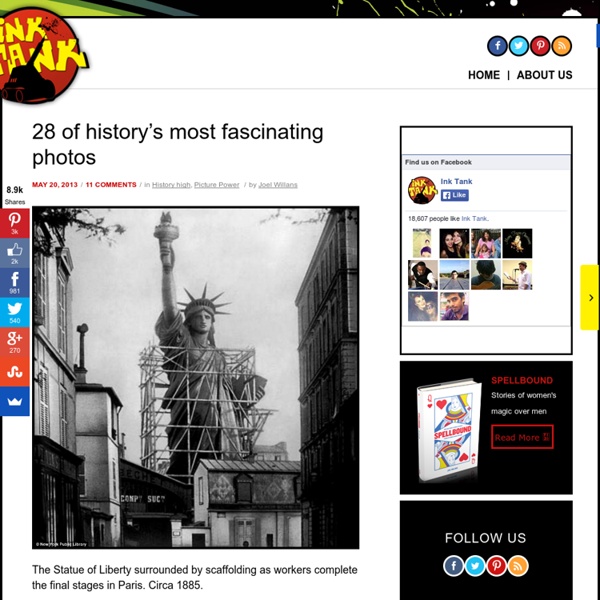 The Statue of Liberty surrounded by scaffolding as workers complete the final stages in Paris. Circa 1885. An Royal Air Force pilot getting a haircut during a break between missions, Britain, 1942 Bob Marley on the beach with Miss World 1976 Cindy Breakspeare, mother of Damien Marley. Ethnomusicologist Frances Densmore recording the music of a Blackfoot chief onto a phonograph, 1916. A napalm attack near U.S. troops on patrol in South Vietnam, circa 1966. Fritz, a television celebrity bulldog, is shaved by a Californian barber. A female Lebanese fighter, 1982. Woodstock – The Opening Ceremony. Chester E. Beautiful color image of the German Focke-Wulf Fw 190A-5 fighters, of Fighter Squadron JG54, during flight, 1943. Attorney at law, Mohandas Gandhi, 1893. In the aftermath of the D-Day invasion, two boys watch from a hilltop as American soldiers drive through the town of St. Benjamin, the last Tasmanian Tiger, at Beaumaris Zoo, 1933. Corporal Luther E. Charlie Chaplin without makeup.

Amazing Abandoned Places and Buildings - Travel & Places Posted by : PichoAugust 15, 2013 Abandoned places and buildings are mystic and beautiful. The stories behind these places are always unique and amazing. Through time the nature started to leave traces to the ruins that makes these abandoned places and buildings look amazing. Wow! History's most iconic photos in colour VJ Day in Times Square Abraham Lincoln Anne Frank Bikini Atoll Thich Quang Duc – The Burning Monk RMS Maurentania Ancient skeletons discovered in Georgia threaten to overturn the theory of human evolution By David Derbyshire Updated: 12:26 GMT, 9 September 2009 For generations, scientists have believed Africa was the cradle of mankind. Now a stunning archaeological discovery suggests our primitive ancestors left Africa to explore the world around 800,000 years earlier than was previously thought before returning to their home continent.

40 Must-See Historical Photos EmailEmail While some photographs capture our attention because of how the artist behind the picture has decided to compose the shot, others are fascinating simply because of the subjects that they depict. Below are some captivating photographs that tell stories about our past, depicting the people, places and events that have shaped the course of history.

Dedicated Nature Photographer. I started to do photography in January 2000 as a new year resolution, because I needed an interest for my spare time other than lying on tropical beaches drinking beer which is what scuba diving instructors do. And I fell in love with my camera. I am now retired and I am able to do photography full time. I live very close to an awesome beach with rocks and an iconic lighthouse on the North East coast of England.. karate Grand Master. Unexplained Mysteries of LOST LANDS Many western cultures have myths of lost lands, where once lived our great ancestors. Typical is Lyonesse, a fabled land once said to exist between Land’s End and the Scilly Isles, off the British coast. On this land stood the city of Lions and some 140 churches. Folk tales, and later poets such as Tennyson, kept the fable alive by associating it with King Arthur. Thought to be the place of his birth, his death has also been associated with the lost land. Logically, it seems the fable arose from its association with the Breton town St-Pol-de-Leon, know to the Roman’s as Leo’s Castle.

More Rare Photos from History Miss America 1924. Vikki "The Back" Dougan, 1957. She was the inspiration for the cartoon femme fatale, Jessica Rabbit. Annie Oakley. The EDU Photography Content Collection Video: Exposure and MeteringTools & Techniques for Photographing the Passage of Time Photography is magical. You can use your camera to capture a fleeting moment and the passage of time in a single photograph. 1000-year-old coins found in Northern Territory may rewrite Australian history A find of 1000-year-old coins (not pictured) had led archaeologists to launch an expedition that may rewrite Australian history. Source: news.com.au REMEMBER when you were taught that Australia was discovered by James Cook in 1770 who promptly declared it "terra nullius" and claimed it for the British throne? Turns out that could be completely and utterly wrong. Five copper coins and a nearly 70-year-old map with an "X" might lead to a discovery that could rewrite Australia's history. Australian scientist Ian McIntosh, currently Professor of Anthropology at Indiana University in the US, is planning an expedition in July that has stirred up the archaeological community.

23 Rare Photos That Will Tell You Some Of The Most Fascinating Facts In History. Life By rosey | I remember learning history in school a long time ago and it often made me feel bored and sleepy, because it was never fun! From what I remember, learning history was all about reading the longest paragraphs ever. But when I came across this list of pictures, I found them all very fascinating and scrolled through all of them. Take a look yourself and be educated!

HDR Tutorial – High Dynamic Range Photography Tutorial HDR Tutorial – How to Make Beautiful HDR Photos with Ease! Which HDR Software to use – Mac or Windows? The first thang you’re gonna need is some HDR Software. If you have a Mac, I strongly recommend Aurora HDR 2017 then follow the Free HDR Tutorial for Macs. If you use Windows, I recommend getting Photomatix Pro and use the coupon code “TREYRATCLIFF” to save 15%.