The Most Beloved Street Art Photos of 2013 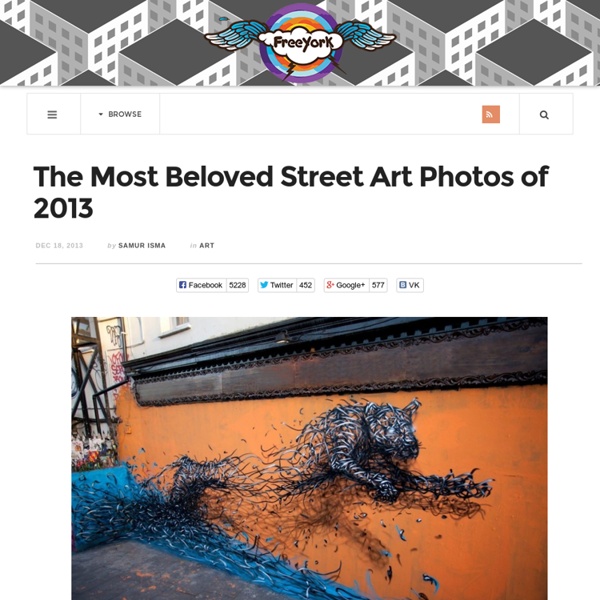 Every year we look forward to seeing the photos of the most beloved street art photos discovered by Street Art Utopia. Here is a selection of street art photos from around the world, each with different social messages and graphic styles. Via lostateminor.com

The French Doodler From elaborate patterned owls to wacky doodle characters, illustrator DZO Olivier loves to draw with pens on paper, and sometimes he works with digital tools. Artwork © DZO Olivier Via Houhouhaha Inspiration Photoshop #3 La collection Inspiration Photoshop #3 est disponible ! Découvrez des images incisives réalisées sous Photoshop par des talents du monde entier. Moe Pike Soe – www.thebeaststudio.com Matteo Pozzi – Mixer Bink – Peter Lundstrom – This Parrot Is Not What It Looks Like – It’s Actually A Human Being EmailEmail This parrot optical illusion, created by Italian fine art body painter Johannes Stoetter (previously here), is simply flawless! What looks like a parrot at first sight is actually a body-painted model. Take a look at the photos and try to figure the illusion out before scrolling down to the “behind the scenes” photos. Source: johannesstoetterart.com (via)

14 Great Banksy Street Art Photos and Quotes! “There are four basic human needs; food, sleep, sex and revenge.” – Banksy “Nothing in the world is more common than unsuccessful people with talent, leave the house before you find something worth staying in for. ” – Banksy “Think outside the box, collapse the box, and take a fucking sharp knife to it.” – Banksy Splashes of Color in the Norwegian Rain: NUART 2013 Posted on September 11, 2013 The pale wan institutional hues of the Stavanger International Airport now are punctuated by the brilliant blues and stencil patterning wrapping around the control tower. Small multi-layered stencil portraits pop from post-boxes, primary color-clad children hang off of stoop stairs and balance on stacked chairs and a graffiti slathered Michaelango stands on the corner next to the eye doctors office. Turn up another street and an aerosoled sultry geisha rises, wrapped in boisterous brocade on a typically white wall in this rather monochromatic sea town. With these new wall works by M-City, C215, Ernest Zacharevic, Martin Whatson, and Hush (respectively) and a number of others, Nuart 2013 brought a lot of color to the streets this year as it celebrated what founder Martyn Reed called “one of, if not thee, finest Nuart events yet”. Ernest Zacharevic (photo © Martha Cooper)

This Artist Uses A Weird Technique To Mess With The Mind Of His Audience. I Was Lost In Wonder. Davit Yukhanyan is an illustrator and architect based in Yerevan, Armenia. His sketches are unique in that they have drawings within drawings to complement the final concept. His current works And When You Lose Control and Isolated Winner prove no minuscule detail is missed. Vince Low Creates Celebrity Portraits Exclusively with Scribbles For the average illustrator, scribbling isn’t the best way to create realistic-looking portraits. But then again, Vince Low isn’t your average illustrator. The Malaysian artist somehow manages to produce impeccable portraits of some of Hollywood’s greatest actors using only childish scribbles. The lead illustrator of Malaysian advertising agency, Grey, Vince Low has an impressive portfolio of stunning artworks, but his latest portrait series, called Faces, is particularly eye-catching. That’s because the stunning depictions of stars like Jack Nicholson, Morgan Freeman, Will Smith or Leonardo Di Caprio were all done exclusively with scribbles on blank white canvases.

Face Art: Incredibly Awesome Makeup Portraits by Alexander Khokhlov Moscow based photographer and artist Alexander Khokhlov has created a wonderful art project titled “2D or not 2D”. In this series, the artist creates makeup portraits which can easily confuse our vision. He created these portraits in 2D and some of these photos might indeed do the trick with the help of Valeriya Kutsan’s professional makeup work, the natural lines of the models’ faces are almost indistinguishable. “I like to work with people but not only for their entity. Everybody is a field for experiments and I don’t know what would be next.