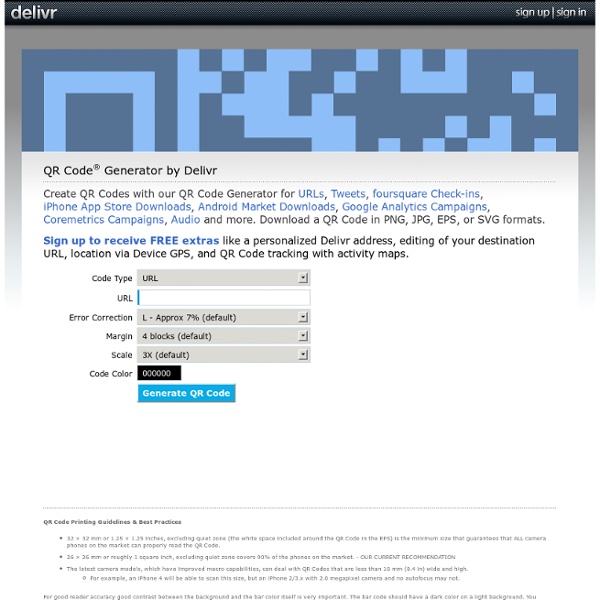 Delivr FREE is offered for personal, non-profit, educational or limited commercial use in social, mobile, and Web-based campaigns, limited run posters and local-level print advertising campaigns. Delivr FREE can not be resold or provided as part of a commercial offering or service. If you are creating a Delivr account as part of a commercial service offered to others e.g., using Delivr to provide campaign management, landing pages, tracking or reports to a client, please select the appropriate paid plan. Delivr PLUS and Delivr PRIME are offered for limited commercial use by individuals, consultants. micro-entities and small companies in social, mobile, and Web-based media campaigns, limited run posters, event marketing and state/province-level direct mail, email and print advertising campaigns. Note: Delivr uses the following breakdown regarding company size.

QR Code and 2D Code Generator This page is an online two dimensional code generator which is written in PHP. It can generate QR Code, Data Matrix, Aztec Code and Micro QR Code for the time being. Because QR Code is much more popular than the other code formats, it is separately named in the page title. QR Code on a Business Card but how? Comment QR Code on a Business Card but how? (Added: January 18th, 2010 QR Coded LinkedIn profile with tracking on your business card).

10 ways to use QR Codes in a History classroom Kerry ⋅ EdTech, History ⋅ History, QR Code ⋅ 14 comments Photo by DavidPitkin This post comes with a huge acknowledgement to several people in my PLN – who, through constant tweeting about QR Codes, have forced me to take a look at their worth. I also have to acknowledge Kevin Fear our Head, who is just as enthusiastic about exploring the uses of QR Codes in school and who is very keen to chat about ideas for their potential use. With these people behind me, I’ve set off to see if and how QR codes could have an impact in our school and more particularly, in my History lessons.

Mobile Barcodes Looking to generate QR-Codes? If so, you have come to the right place. Use our QR-Code generator to create QR-Codes of your choice. Did you know you can make QR-Codes out of any content you like? Chart Tools: Infographics - Infographics - Google Code You can create a QR code on the fly with a URL GET request. Table of Contents Overview QR codes are a popular type of two-dimensional barcode. They are also known as hardlinks or physical world hyperlinks. QR Codes store up to 4,296 alphanumeric characters of arbitrary text. QR code generator. Create your QR codes here. A QR code generator is a software or online application that allows you to create QR codes. QR codes are probably the most popular and flexible two-dimensional barcode that is used by most businesses and individuals for anything from their marketing campaigns, education and even in ordinary lives and lets not forget just for fun! They’re widely used by any web design agency As QR codes gain popularity, more and more Web sites are offering free QR code generator services. With all the choices, and because they are all similarly free, most people just use the first QR code generator they find.

QR Code QR code for the URL of the English Wikipedia Mobile main page, " QR code (abbreviated from Quick Response Code) is the trademark for a type of matrix barcode (or two-dimensional barcode) first designed for the automotive industry in Japan. A barcode is a machine-readable optical label that contains information about the item to which it is attached. A QR code uses four standardized encoding modes (numeric, alphanumeric, byte / binary, and kanji) to efficiently store data; extensions may also be used.[1] The QR Code system became popular outside the automotive industry due to its fast readability and greater storage capacity compared to standard UPC barcodes. Chinese golf resort tees off with world's largest human QR code A gigantic QR code took form in China a couple of days ago. Mission Hills China trumpets the accomplishment with the headline, "World's Largest Golf Club & Spa Resort Creates the World's Biggest QR Code." Sounds like someone is obsessed with being the world's largest. That headline is a little misleading, though.

QR codes add a new element to the Periodic Table We all know the Periodic Table of Elements — it's that thing with the pretty colors that hung on your chemistry class wall. While we may all recognize the venerable chart, we may not really know it (unless it's done up as a Star Wars version). Now, students and science buffs can actually interact with it thanks to QR codes for each element. QR Codes in Books - Do They Work? QR codes often get a bad rap these days. The ugly little boxes appear everywhere and to many, they seem to be a waste of time and space. But the reality of QR codes is like any tool - the value is determined by how it’s used. When used effectively, QR codes bridge online and offline worlds by making it easier to use a mobile phone to visit a webpage, for example.

Reader Engagement With Transmedia: How To Use QR Codes I love our little writer’s community, and it’s always a thrill to discover the new and interesting things that people are using to market their books and engage readers. In this post, guest blogger Emily Craven explains how you can use one simple thing – a QR code – to give your readers a more interactive experience. I also have to confess that I had no idea how to use these little squares before I read this post – so thanks Emily! In the modern day it seems like we equate the amount of money we spend to the quality of the experience. Seeing the view from the top of the Eiffel Tower is more prestigious then the view from below.

Why You Should Start Using QR Codes In Your Classroom I’ll admit QR codes were a bit of a mystery to me until recently. I’ve seen the funny little codes in magazines and advertisements, and I understood that if you had an app on your phone you could scan them and get…somewhere. Beyond that I didn’t give them much thought. However, it seems I’ve been reading about them everywhere recently and they really can have some practical uses – even in the classroom . Getting Started The first thing I did was get a free QR reader app for my iPhone – I got one called Qrafter .

QR Codes Explained and Ideas for Classroom Use When I lead workshops or give presentations I typically don't distribute handouts in paper form. Instead I just give the link to my digital resources for that day's presentation or workshop. Recently, I have started to deviate from that policy just a little bit. Now I like to place printed QR codes in a dozen or so locations in the room. Those QR codes are linked to my slides and digital handouts. I started doing this because often people would miss the links when they're just on a slide at the beginning and end of the presentation.