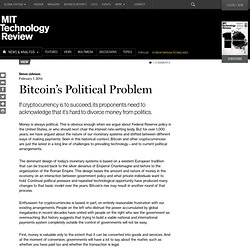 This is obvious enough when we argue about Federal Reserve policy in the United States, or who should next chair the interest rate-setting body. But for over 1,000 years, we have argued about the nature of our monetary systems and shifted between different ways of making payments. Seen in this historical context, Bitcoin and other cryptocurrencies are just the latest in a long line of challenges to prevailing technology—and to current political arrangements. The dominant design of today’s monetary systems is based on a western European tradition that can be traced back to the silver denarius of Emperor Charlemagne and before to the organization of the Roman Empire. This design bases the amount and nature of money in the economy on an interaction between government policy and what private individuals want to hold. Enthusiasm for cryptocurrencies is based, in part, on entirely reasonable frustration with our existing arrangements. Bitcoin Foundation sees ‘zero conclusive evidence’ of founder’s identity. 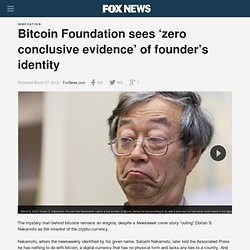 Nakamoto, the man that Newsweek claims is the founder of Bitcoin, denies he had anything to do with it and says he had never even heard of the digital currency until his son told him he had been contacted by a reporter three weeks ago.AP Photo/Damian Dovarganes Bitcoin tokens seen in Sandy, Utah.AP Photo/Rick Bowmer The mystery man behind bitcoins remains an enigma, despite a Newsweek cover story “outing” Dorian S. Nakamoto as the inventor of the crypto-currency.

Nakamoto, whom the newsweekly identified by his given name, Satoshi Nakamoto, later told the Associated Press he has nothing to do with bitcoin, a digital currency that has no physical form and lacks any ties to a country. Bitcoin Obliterates “The State Theory Of Money” Once you get past the childish title, the recent bitcoin piece from Karl Denninger raises some issues that warrant consideration from bitcoin economists. 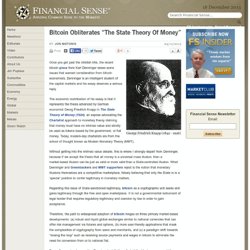 Denninger is an intelligent student of the capital markets and his essay deserves a serious reply. The economic contribution of his essay is that it represents the thesis advanced by German economist Georg Friedrich Knapp in The State Theory of Money (1924), an expose advocating the Chartalist approach to monetary theory claiming that money must have no intrinsic value and strictly be used as tokens issued by the government, or fiat money. Today, modern-day chartalists are from the school of thought known as Modern Monetary Theory (MMT). Without getting into the intrinsic value debate, this is where I strongly depart from Denninger, because if we accept the thesis that all money is a universal mass illusion, then a market-based illusion can be just as valid or more valid than a State-controlled illusion.

Now for the big and final one. Bitcoin Proves The Libertarian Idea Of Paradise Would Be Hell On Earth. Libertarians love Bitcoin. About 44% of the online crypto-currency's users self-identify as Libertarians. They love the fact that it's not controlled by a government or central bank — so no online Fed can "print" more of it and inflate our way out of trouble. They love that it's decentralized; it's the currency of The People, not The Man. They love that it's "mined," a bit like gold, because that makes it a bit like the gold standard, which libertarians think real currencies ought to be tied to. They love that Bitcoin isn't taxed, so you can hide your income from the government if you want to. So the Bitcoin experience gives us a glimpse of Libertarian paradise: What life would be like with as little government interference as possible, in a market free of burdensome laws and taxes.

Unfortunately, that experience looks like a total nightmare. If Bitcoin was a country — Bitcoinistan? Bitcoin is most useful to criminals. Currently, for ordinary people, cash and credit work just fine. Big banks vs. Bitcoin libertarianism. Banks should learn to work with, rather than against, the new role of money in a peer-to-peer landscape, says media theorist and author Douglas Rushkoff writes on Mashable, based on the arguments of his new book, Present Shock: When Everything Happens Now. 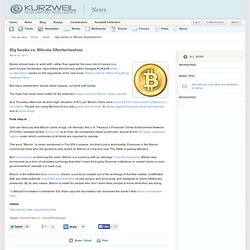 But many libertarians* would rather bypass, not work with banks. The hype has never been hotter for the Internet’s crypto-currency Bitcoin, Salon reports. At a Thursday afternoon all-time-high valuation of $72 per Bitcoin, there were around $700 million worth of Bitcoins in circulation. People are using Bitcoins to buy real goods and services, to hedge against European financial calamity, and to score drugs. Feds step in One can fairly say that Bitcoin came of age. The word “Bitcoin” is never mentioned in FinCEN’s release, but that’s just a technicality. But not everyone is cheering the news. . * Lifeboat Foundation’s libertarian Eric Klien says the foundation has launched the world’s first bitcoin endowment fund.