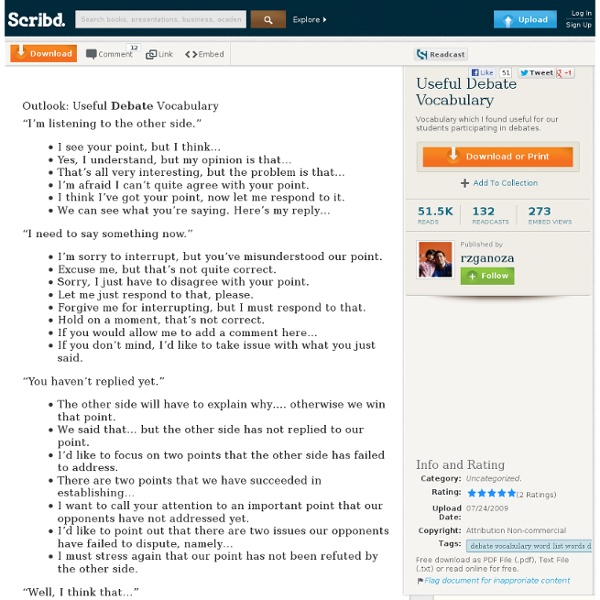 Outlook: Useful Debate Vocabulary m listening to the other side. I see your point, but I think Yes, I understand, but my opinion is that That s all very interesting, but the problem is that m afraid I can t quite agree with your point I think I ve got your point, now let me respond to it We can see what you re saying. s my reply I need to say something now. m sorry to interrupt, but you ve misunderstood our point Excuse me, but that s not quite correct Sorry, I just have to disagree with your point Let me just respond to that, please Forgive me for interrupting, but I must respond to that Hold on a moment, that s not correct If you would allow me to add a comment here If you don t mind, I d like to take issue with what you just said. You haven t replied yet. The other side will have to explain why.... otherwise we win that point We said that but the other side has not replied to our point d like to focus on two points that the other side has failed to address There are two points that we have succeeded in establishing

Teaching Your Students How to Have a Conversation I was recently in a third grade classroom and was struck by the presence of rules that were posted for how to have a conversation. The poster said, "Each person must contribute to the discussion but take turns talking. Ask each other, 'Would you like to add to my idea?' Parker -Delivering a Persuasive Speech The Internet TESL Journal Douglas Parkerbps2 [at] capital.net Level:Upper-intermediate to advancedOverview:Students need to understand that how they say something and how they physically present themselves are just as important as what they say. By understanding the dynamics involved in effective persuasive speaking, students will improve their overall confidence in communicating.Purpose:The purpose of this lesson is to improve studentsâ speaking skills by understanding persuasion proficiencies.

useful interview expressions game useful interview expressions: Practice useful interview expressions game using this ESL fun Game.This game is also excellent for classroom teaching. Teachers can engage students in a classroom vocabulary or grammar review. It is suitable for intermediate and advanced esl learners. It can be used to energize a dull class, to review work that was done or simply as a reward for good classroom work. Have fun teaching and learning English! Describing photos (comparing, contrasting and speculating) You are going to practise language for; Describing photosComparing and contrasting photos (discussing similarities and differences)Speculating on what might be happeningReacting to photos (giving opinions) Discuss Look at the presentation. Follow the instructions and talk about some of the photos Write The language used here for comparing and contrasting / speculating is also useful for writing discussion / argument essays.

Giving Opinions Four Corners ESL/EFL Speaking Activity - Pre-intermediate - 25 Minutes In this fun class activity, students practice expressing and defending their opinions. The teacher places a different sign (Strongly Agree, Agree, Disagree, and Strongly Disagree) in each corner of the classroom. Giving Directions in English Giving directions in English is one of the most useful functions there is. Everyone understands that this is the function they are likely to use on the street, literally, and therefore the motivation is usually quite easy. To be able to give directions you need to learn a set of phrases which you later combine into a conversation. To teach the phrases we offer you the following. A simple drill (teaching the basic phrases), an infographic, several worksheet activities and an interactive quiz.

apartheid (social policy apartheid, ( Afrikaans: “apartness”) policy that governed relations between South Africa’s white minority and nonwhite majority and sanctioned racial segregation and political and economic discrimination against nonwhites. The implementation of apartheid, often called “separate development” since the 1960s, was made possible through the Population Registration Act of 1950, which classified all South Africans as either Bantu (all black Africans), Coloured (those of mixed race), or white. A fourth category—Asian (Indian and Pakistani)—was later added. Racial segregation, sanctioned by law, was widely practiced in South Africa before 1948, but the National Party, which gained office that year, extended the policy and gave ... (100 of 758 words) <ul><li><a href="/EBchecked/media/95471/A-South-African-beach-during-the-apartheid-era?topicId=29332"><img src=" alt="apartheid: South African beach during the apartheid era" /><span>A South African beach during the apartheid era.

5 of My Favorite English Games for ESL Students I saved the best for last. My students requested this game more often than any other game we ever played. It's based on the old drinking game "Ring of Fire," modified for the classroom. Asking For and Giving Street Directions English Exercise Introduction: Anybody who has travelled to another country or city has got lost. Sometimes maps don't help, so you have to ask somebody for directions. If you're in a country where they don't speak your language, this can be difficult. At other times, you will have to give directions to people visiting your country. In many cases, people just follow the direction the person was pointing to, and hope they will find the place they are looking for.