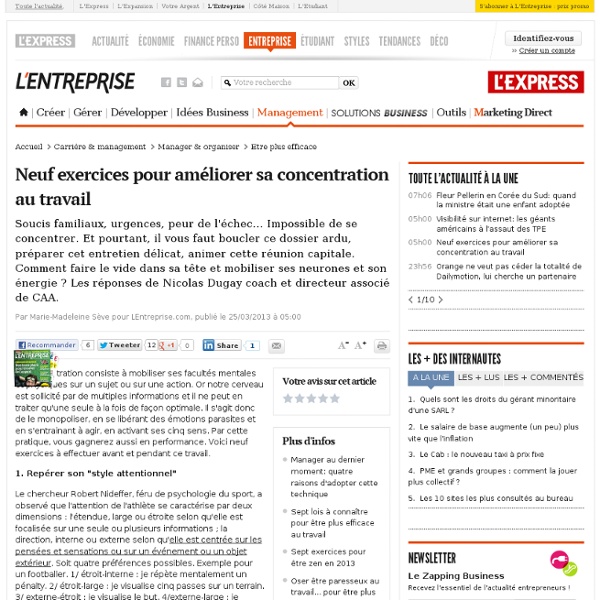 How to Practice Drawing — Study To get better as an artist you need to establish a practice, and do it right. The core of this practice is the Study Phase. The Study Phase is meant to be a mental workout. When you push yourself past your comfort zone in a physical workout, you body adapts and becomes stronger.

5 Great Infographics for Language Teachers and Learners Infographics are great learning materials. The colourful graphics, clear text and their size make them ideal for classroom integration. I have been posting some of the ones I deem educationl to help teachers leverage this resource to create engaging, relevant and personalized learning experiences in their classes. In this regard, I am introducing you today to a series made up of four parts all containing the best infograpgics about English language teaching and learning.

Not all brains are created equal: The relevance of individual differences in responsiveness to transcranial electrical stimulation 1Department of Experimental Psychology, University of Oxford, United Kingdom A current issue in the research of augmentation of brain functions using transcranial electrical stimulation (tES) is the diversity and inconsistency in outcome results. Similar studies often report different results, depending on the parameters and tasks used. What is the Mandate of Heaven in China? Answer: The "Mandate of Heaven" is an ancient Chinese philosophical concept, which originated during the Zhou Dynasty (1046-256 BCE). The Mandate determines whether an emperor of China is sufficiently virtuous to rule; if he does not fulfill his obligations as emperor, then he loses the Mandate and thus the right to be emperor. There are four principles to the Mandate:1) Heaven grants the emperor the right to rule,2) Since there is only one Heaven, there can only be one emperor at any given time,3) The emperor's virtue determines his right to rule, and,4) No one dynasty has a permanent right to rule. Signs that a particular ruler had lost the Mandate of Heaven included peasant uprisings, invasions by foreign troops, drought, famine, floods and earthquakes. Of course, drought or floods often led to famine, which in turn caused peasant uprisings, so these factors were often interrelated.

Connected Learning Visually Explained for Teachers We have been talking a lot about the connected educator in the previous posts because we are in a month that is officially labelled the Connected Educator month, however, today we will have a cursory look into another closely related topic: connected learning. Connected learning is a learning theory that is a set of conceptions and ideas about the nature of learning. This theory, as is indicated in the graphic below, works towards making learning a collaborative task built through the participation of different parts. Connected learning also draws on the diversity of experiences, interests, and contexts in which learners participate.According to this theory, this diversity of the learners experiences increases the learning potential. At the centre of any connected learning are three values :

Ancient China Religions, Ancient Chinese Religious Beliefs Advert Ancient China Religion: History has witnessed that religion has always evolved with the evolution of different civilizations and various beliefs have come and disappeared along with the disappearance of a particular civilization. Ancient China has also witnessed many religious practices. In the Bronze Age, the Chinese believed in worshipping spirits. In many ancient civilizations spirits were worshipped in different forms. Ten Tips for Becoming a Connected Educator We all know that education budgets are getting cut more and more, and that meaningful professional-development opportunities have unfortunately become a bit of an oxymoron in education. Not only can being a "connected educator" help change that, but it can also provide you with ongoing inspiration and support. I'd even go as far to argue that being connected will be the most impactful thing you can do in your career. So with all of that said, I'd like to provide you with these ten tips on how you can get connected -- starting tomorrow. 1. Embrace Making Mistakes

Zhou Dynasty, Zhou Dynasty History, History of Ancient China, China's dynasties Era Information Time: 1027 B.C.-221B.C.Location of Capital:Hao, near the city of Xian, Shannxi ProvinceEmperors: Twelve kings for eleven dynasties Replaced by:Spring and Autumn Period According to Chinese accounts, Zhou was built by a chieftain of a tribe called Zhou. The chieftain overthrew Shang’s last ruler and build the Zhou dynasty. He settled down in Hao, a city near today’s Xi’an city in Shannxi province. Take a Xian Tours to experience the historical site. A Day in the Life of a Connected Educator – Using social media in 21st century classrooms One of our main goals at Powerful Learning Practice is to turn educators into 21st Century educators. That is, teach them how to use social media and other powerful Web 2.0 tools to transform their classrooms into learning environments that are ready for today’s iGeneration students. One of the most common questions we get is, “But where do we find the time to use all this new technology?” To answer that question, we developed this infographic – A Day in the Life of a Connected Educator to show that using social media in your classroom and in your life can be integrated, easy, and fun.

Sumerian Gods and Goddesses Sumerian Gods Is Anu holding the symbolic Holy Grail of a Bloodline he created? British Museum Nephilim, Anunnaki - Royal Bloodline - Creators "Those who from Heaven to Earth came" The Sumerian King List allegedly recorded all the rulers of Earth over 400,000 years who were said to be gods, demigods, or immortals ... or one soul playing all the roles.

25 Killer Sites For Free Online Education Whether you’re five or ninety five, the internet has a lot to offer. Particularly when the topic is education, the resources on the internet are endless. Best of all, many high quality sites are completely free. From history to coding, excellent free education awaits on the following 25 sites. 1.