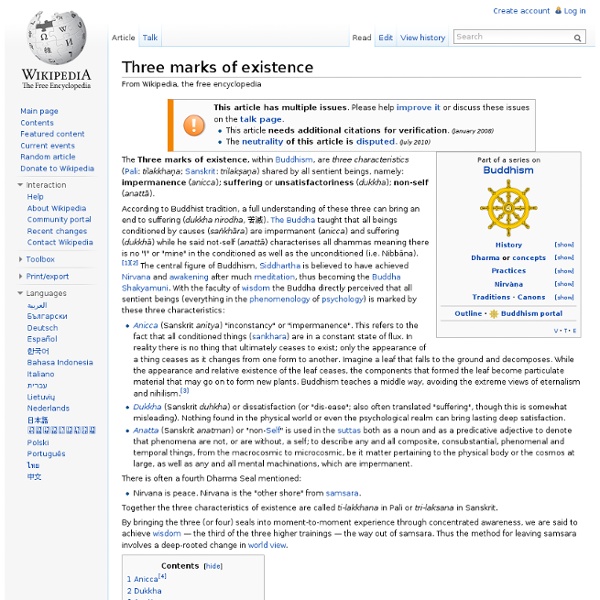 The Three marks of existence, within Buddhism, are three characteristics (Pali: tilakkhaṇa; Sanskrit: trilakṣaṇa) shared by all sentient beings, namely: impermanence (anicca); suffering or unsatisfactoriness (dukkha); non-self (Anatta). There is often a fourth Dharma Seal mentioned:[citation needed] Together the three characteristics of existence are called ti-lakkhana in Pali or tri-laksana in Sanskrit. By bringing the three (or four) seals into moment-to-moment experience through concentrated awareness, we are said to achieve wisdom—the third of the three higher trainings—the way out of samsara. Thus the method for leaving samsara involves a deep-rooted change in world view. Anicca[4][edit] [Pronounced Anitcha/Anitya] All compounded phenomena (things and experiences) are inconstant, unsteady, and impermanent. Dzongsar Jamyang Khyentse Rinpoche states that in the four seals of the Mahayana, Nirvana should be viewed as "beyond extremes". Dukkha[edit] Anatta[edit] See also[edit] Buddhism

Impermanence Impermanence (Pāli: अनिच्चा anicca; Sanskrit: अनित्य anitya; Tibetan: མི་རྟག་པ་ mi rtag pa; Chinese: 無常 wúcháng; Japanese: 無常 mujō; Korean: 무상 musang; Thai: อนิจจัง anitchang, from Pali "aniccaŋ") is one of the essential doctrines or three marks of existence in Buddhism. The term expresses the Buddhist notion that all of conditioned existence, without exception, is transient, or in a constant state of flux. The mutability of life, that time passes on no matter what happens, is an important aspect of impermanence. Śūnyatā Śūnyatā, (Sanskrit, also shunyata; Pali: suññatā), in Buddhism, translated into English as emptiness, voidness,[1] openness,[2] spaciousness, vacuity, is a Buddhist concept which has multiple meanings depending on its doctrinal context. In Theravada Buddhism, suññatā often refers to the not-self (Pāli: anatta, Sanskrit: anātman)[note 1] nature of the five aggregates of experience and the six sense spheres. Suññatā is also often used to refer to a meditative state or experience. Etymology[edit]

How Japanese Culture influences their Designs A warm welcome to you dear reader! If you have not already, why not subscribe to The Design Sojourn Newsletter and get my latest thoughts on Strategies for Good Design conveniently delivered right to your inbox? It's free! You can also follow me on Twitter and Facebook as well. Pratītyasamutpāda Pratītyasamutpāda (Sanskrit: प्रतीत्यसमुत्पाद; Pali: पटिच्चसमुप्पाद paṭiccasamuppāda) is commonly translated as dependent origination or dependent arising. The term is used in the Buddhist teachings in two senses: On a general level, it refers to one of the central concepts in the Buddhist tradition—that all things arise in dependence upon multiple causes and conditions.On a specific level, the term is also used to refer to a specific application of this general principle—namely the twelve links of dependent origination.

Kenya Hara On Japanese Aesthetics by Oliver Reichenstein What makes Japanese design so special? Basically, it’s a matter of simplicity; a particular notion of simplicity, different from what simplicity means in the West. So are things in general better designed in Japan? Well, actually, it’s not that simple… Ātman (Buddhism) Whereas Buddhism generally stresses the non-Self teachings of the Buddha, some Mahāyāna Buddhist sutras and tantras present cataphatic Buddhist teachings with positive language by asserting the ultimate reality of an atman [Self], which is equated with the essential, ultimate nature of mind (Dalai Lama — see relevant section below). This doctrine, also known as Tathāgatagarbha, is also seen as the inborn potential to become a Buddha. The Theravāda Dhammakaya Movement of Thailand also asserts the reality of the atman, which it equates with nirvana. Śāntideva (an 8th-century Indian Buddhist philosopher and practitioner) informs us that in order to be able to deny something, we first of all need to know what it is that we are denying.[2] Without contacting the entity that is imputed You will not apprehend the absence of that entity. (Bodhicaryāvatāra)

YTU #1 - Kenya Hara's design philosophy A case study of Kenya Hara’s design philosophy Objectives: l By discussing the case study of this famous Japanese designer, learn two of the most important creative concepts of his design philosophy – Redesign and Haptic, to think different, through introductions of several interesting examples from exhibitions directed by Kenya Hara. l By practicing the activities within the concepts and ideas, let people implement the concepts they learn in this case study to solve the challenges and problems we are encountered in daily life, thus get a deeper understanding on Hara’s creative philosophies. Nirvana Nirvāṇa (Sanskrit: निर्वाण; Pali: निब्बान nibbāna ; Prakrit: णिव्वाण) literally means "blown out", as in a candle.[1] It is most commonly associated with Buddhism.[web 1] In Indian religions, the attainment of nirvana is moksha,[note 1] liberation from the cycle of rebirth.[3][note 2] In the Buddhist context nirvana refers to the imperturbable stillness of mind after the fires of desire, aversion, and delusion have been finally extinguished.[1] In Hindu philosophy, it is the union with the divine ground of existence Brahman (Supreme Being) and the experience of blissful egolessness. Etymology[edit] Phonetics[edit]

Japanese Garden - The Helpful Gardener Design Principles There are certain intrinsic principles that one needs to grasp to successfully capture the spirit of the Japanese garden. Most importantly, nature is the ideal that you must strive for. You can idealize it, even symbolize it, but you must never create something that nature itself cannot. Karma and Anatta or Non-self and Kamma - Buddha's world (from"Buddhaloka", the Newsletter of the Buddhist Society of Victoria, July/August 1997 by Ajahn Jagaro The teaching on Anatta or non-self is one of the most fundamental aspects of Buddhism, and may be the most important feature which makes the Buddha's teaching quite unique. The other aspect of the teaching which is sometimes seen to be difficult to reconcile or explain, interms of anatta, is the teaching of kamma or the law of kamma, which is the law of cause and results. The causes we create through our actions of body, speech and mind, and the consequences that arise from these actions. The law of kamma states that as we sow so shall we reap, and whatever kamma we shall do, we will be the heirs that inherit it.

Theories behind Japanese Design A warm welcome to you dear reader! If you have not already, why not subscribe to The Design Sojourn Newsletter and get my latest thoughts on Strategies for Good Design conveniently delivered right to your inbox? It's free! You can also follow me on Twitter and Facebook as well. Cetanā Cetanā (Sanskrit, Pali; Tibetan Wylie: sems pa) is a Buddhist term commonly translated as "volition", "intention", "directionality", etc. It can be defined as a mental factor that moves or urges the mind in a particular direction, toward a specific object or goal.[1][2] Cetanā is identified within the Buddhist teachings as follows: Definitions[edit]