Resiliency: Why Growth Mindsets and Grit are Just Pieces of a Larger Puzzle —... Higher education is abuzz these days with conversations about Carol Dweck's work on mindsets and Angela Duckworth's research on grit. 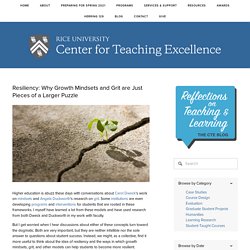 Some institutions are even developing programs and interventions for students that are rooted in these frameworks. I myself have learned a lot from these models and have used research from both Dweck and Duckworth in my work with faculty. But I get worried when I hear discussions about either of these concepts turn toward the dogmatic. Both are very important, but they are neither infallible nor the sole answer to questions about student success. High Achievers Have More Grit Than Talent. 4,739 views|Aug 30, 2018,10:00 am Joan MichelsonContributorOpinions expressed by Forbes Contributors are their own. 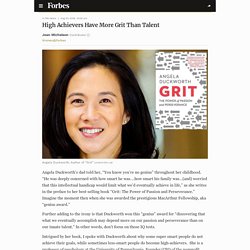 Angela Duckworth, Author of “Grit”Character Lab. Wisdom from a MacArthur Genius: Psychologist Angela Duckworth on Why Grit, No... Creative history brims with embodied examples of why the secret of genius is doggedness rather than “god”-given talent, from the case of young Mozart’s upbringing to E. 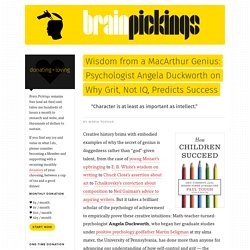 B. White’s wisdom on writing to Chuck Close’s assertion about art to Tchaikovsky’s conviction about composition to Neil Gaiman’s advice to aspiring writers. But it takes a brilliant scholar of the psychology of achievement to empirically prove these creative intuitions: Math-teacher-turned-psychologist Angela Duckworth, who began her graduate studies under positive psychology godfather Martin Seligman at my alma mater, the University of Pennsylvania, has done more than anyone for advancing our understanding of how self-control and grit — the relentless work ethic of sustaining your commitments toward a long-term goal — impact success. A Big Ideas video series on Growth Mindset. Want to Raise Resilient Kids? A Navy SEAL Says Always Do This.

How Parents Talk About Failure Affects Children's Success. Saying "That's OK, you're still good at writing" may not be the best strategy, researchers say. 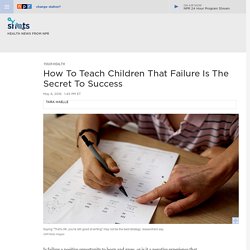 CAP/Getty Images hide caption toggle caption CAP/Getty Images Saying "That's OK, you're still good at writing" may not be the best strategy, researchers say. Is failure a positive opportunity to learn and grow, or is it a negative experience that hinders success? "Parents are a really critical force in child development when you think about how motivation and mindsets develop," says Kyla Haimovitz, a professor of psychology at Stanford University. 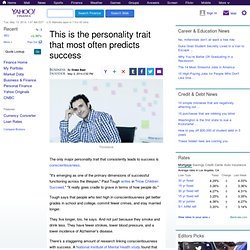 What Parents Should Say as Their Kids Perform. In my work at Growing Leaders, we enjoy the privilege of serving numerous NCAA and professional sports teams each year. 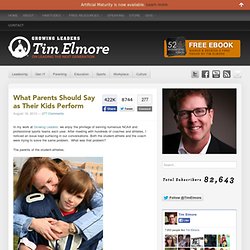 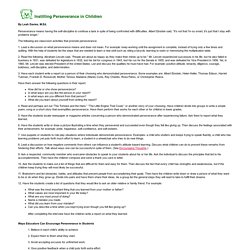 Perseverance means having the self-discipline to continue a task in spite of being confronted with difficulties. Albert Einstein said, “It’s not that I'm so smart, it’s just that I stay with problems longer.” The following are classroom activities that promote perseverance: 1. Lead a discussion on what perseverance means and does not mean. The Power (and Peril) of Praising Your Kids. Why did this happen? 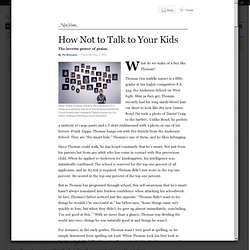 “When we praise children for their intelligence,” Dweck wrote in her study summary, “we tell them that this is the name of the game: Look smart, don’t risk making mistakes.” And that’s what the fifth-graders had done: They’d chosen to look smart and avoid the risk of being embarrassed. In a subsequent round, none of the fifth-graders had a choice. The test was difficult, designed for kids two years ahead of their grade level.

Advice from Olympic Skaters. There’s a rare kinship that exists among Olympians. 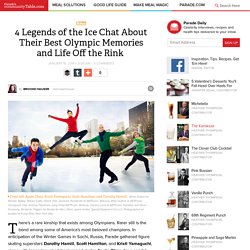 Rarer still is the bond among some of America’s most beloved champions. In anticipation of the Winter Games in Sochi, Russia, Parade gathered figure skating superstars Dorothy Hamill, Scott Hamilton, and Kristi Yamaguchi, along with legendary short-track speed skater Apolo Ohno, for a candid rink-side chat in New York City’s Central Park. Each athlete has changed the face of skating in a unique way (in 1992 Yamaguchi was the first Asian-American woman to win a gold medal, for example; Hamilton brought a new level of athleticism to his sport). And all four have successfully gone on to second acts, having navigated the rocky transition to “regular life.” Why grit, not IQ, is the key to success, the odd habits of famous writers, Bob Dylan in pictures for kids, Stephen Hawking animated, and more. 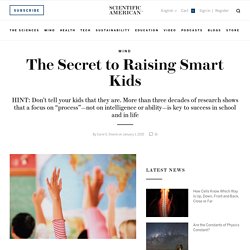