Carol Dweck says mindset is not ‘a tool to make children feel good’ The woman behind the theory of growth mindset says she is kept awake by some teachers misusing it to “make kids feel good about themselves”. 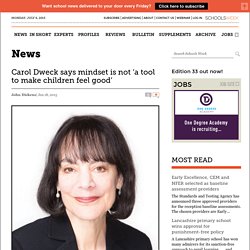 Psychologist Carol Dweck (pictured) devised the concept after decades of research on achievement and success. It explains how intelligence can be developed, so that children focus on improvement rather than worry about how smart they are. The buzz words of character and resilience are at the front of today’s education agenda and the idea has excited many with some schools developing “growth mindset” programmes.

But Ms Dweck, professor of psychology at Stanford University, will tell the Festival of Education at Wellington College today that a culture of misuse is seeping into the sector. Speaking to Schools Week earlier this week, she said: “A lot of teachers are saying ‘yes I have a growth mindset’, without doing the work and without making a journey to deeply understand it and to know how to apply it. Mindset Kit - Praise the Process, Not the Person. Express 10.19 - Feedback That Feeds Forward Empowers a Growth Mind-Set. Feedback That Feeds Forward Empowers a Growth Mind-Set Barbara Dill-Varga and Adam Roubitchek Not too long ago, "feedback" from teachers was synonymous with a few words scrawled across the top of student papers or projects to justify grades. 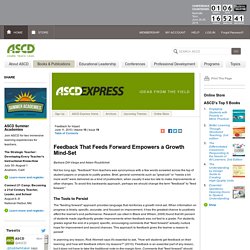 Brief, general comments such as "great job" or "needs a bit more work" were delivered as a kind of postmortem, when usually it was too late to make improvements or other changes. To avoid this backwards approach, perhaps we should change the term "feedback" to "feed forward. " The Tools to Persist. A Highlight and Note by Deborah McCallum from Visible Learning for Teachers: Maximizing Impact on Learning. Education Week. Tamara McCleary sur Twitter : "#Success is an “iceberg”: What people see vs. what really happens. #leadership #entrepreneur #startup. Deborah McCallum sur Twitter : "When we believe we can succeed with effort, we can. #growthmindset Be bold be brave, go deeper, take risks #npdl. Carol Dweck, "Developing a Growth Mindset".

Carol Dweck. How to use feedback to your advantage SmartBlogs. We all need people who will give us feedback. 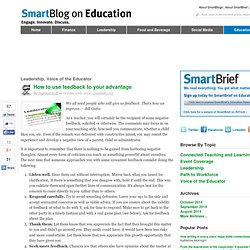 That’s how we improve. – Bill Gates As a teacher, you will certainly be the recipient of some negative feedback, solicited or otherwise. The comments may focus in on your teaching style, how well you communicate, whether a child likes you, etc. Even if the remark was delivered with constructive intent, you may resent the experience and develop a negative view of a parent, child or administrator. It is important to remember that there is nothing to be gained from harboring negative thoughts. Listen well.

We all want to hear that we’re doing well. Naphtali Hoff (@impactfulcoach) served as an educator and school administrator for over 15 years before becoming an executive coach and consultant. Related Posts. Considering the Impact of “Mindset” Over the past few weeks, Twitter has been buzzing with ideas around the impact of “mindset” on student learning. 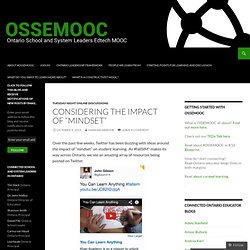 As #fallSIM* makes its way across Ontario, we see an amazing array of resources being posted on Twitter. This page contains an array of resources around teaching the growth mindset, including videos from Ontario educators outlining how they are doing this in their schools. Konrad Glogowski shared this extensive compilation of resources for teachers. David Sornberger from #TLDSBLearns shared this video on Twitter: We have so much to think about when it comes to the importance of a growth mindset. Let’s continue the conversation. On Tuesday, October 7, join the the Growth Mindset “open mic” chat (8:00 p.m.

Your OSSEMOOC Team. *#LNSSIM and #FallSIM refer to “System Implementation and Monitoring”, hosted by the Ontario Literacy and Numeracy Secretariat (LNS) Growth mindset and the value of mistakes in math learning. In this article, I discuss brain plasticity -- the huge potential for our brains to grow -- and what it means for learning of math: EVERY student CAN learn math. 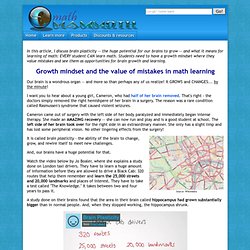 Students need to have a growth mindset where they value mistakes and see them as opportunities for brain growth and learning. Our brain is a wondrous organ — and more so than perhaps any of us realize! It GROWS and CHANGES... by the minute! I want you to hear about a young girl, Cameron, who had half of her brain removed. That's right - the doctors simply removed the right hemishpere of her brain in a surgery. Cameron came out of surgery with the left side of her body paralyzed and immediately began intense therapy. Marci Duncan sur Twitter : "@MicheleCoxhead shares her culture of inquiry - growth mindset is the glue that ties it all together #LCedu #SCDSB. Edutopia sur Twitter : "Tips on using #GrowthMindset to engage students in writing: #ELA #engchat... Why "Good Enough" Isn't Such a Bad Thing. Sometimes growth is small and subtle and doesn't look all that impressive in the moment. 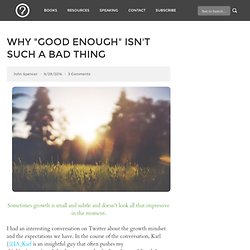 I had an interesting conversation on Twitter about the growth mindset and the expectations we have. In the course of the conversation, Karl (@LS_Karl is an insightful guy that often pushes my thinking) mentioned that he never settles for "good enough" and that he's never satisfied. There are things that he said that really resonated with me: I want to keep getting betterI know that I won't ever be fully satisfied with my class / spaceI'm okay with that, because I know I set the bar too high for myself It has me thinking about my own journey. When I was a brand new teacher, I didn't settle for "good enough. " Learning Styles, Digital Natives & other Neuro-Myths in the Knowledge Building Process. Today I had the privilege of having a university professor send me a journal article written in 2013 about Urban Legends in Education. 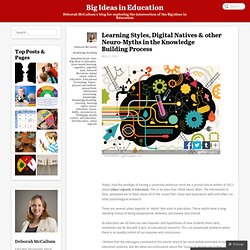 This is an area that I think about often. The information in here, prompted me to think about all of the issues that I have had experience with and reflect on other psychological research. There are several urban legends or ‘myths’ that exist in education. These myths have a long standing history of being perpetuated, believed, purchased, and shared. As educators we all have our own inquiries and hypotheses of how students learn best, sometimes we do this with a lack of educational research. I believe that the messages conveyed in this article need to be more widely promoted in our education systems, lest we allow our enthusiasm about the ‘issues’ to perpetuate further urban legends or neuro-myths.

The three urban legends discussed included Digital Natives, Learning Styles‘, and students as Self-Educators‘ with edtech. 1. 2. 3. 4. Learning Styles and Multiple Intelligences: What Does the Research Say? Most educators have had the experience of not being able to reach a challenging student until trying a completely different approach. 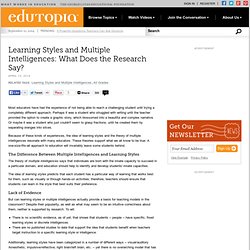 Perhaps it was a student who struggled with writing until the teacher provided the option to create a graphic story, which blossomed into a beautiful and complex narrative. Or maybe it was a student who just couldn't seem to grasp fractions, until he created them by separating oranges into slices. Because of these kinds of experiences, the idea of learning styles and the theory of multiple intelligences resonate with many educators. The Science of Character (a new 8 min "Cloud Film") Amazon. Growth Mindset: A Driving Philosophy, Not Just a Tool. Picture a high school ELA honors class full of amazing kids who came up through the grades without any struggling, kids who thrive in schools that believe these students would do just fine. 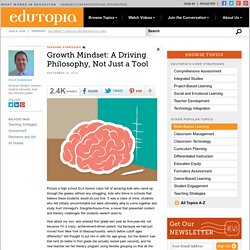 It was a class of mine, students who felt initially uncomfortable but were ultimately able to come together and study Kurt Vonnegut's Slaughterhouse-­Five, a novel that presented content and literacy challenges the students weren't used to. How about my son, who entered first grade last year as five-­year-­old, not because I'm a crazy, achievement­-driven parent, but because we had just moved from New York to Massachusetts, which define cutoff ages differently? We thought to put him in with his age group, but the district saw that he'd do better in first grade (he actually tested past second), and his new teacher ran her literacy program using flexible grouping so that all the kids could continually excel as was appropriate. These are just examples, but what do they have in common? The need to grow. Lizzy Haddon School on Twitter: "New bulletin board. Change your words..change your mindset. Thank you Mrs. Speake! #lizzydragons.

Watch?v=pxru8H6XbR4&feature=youtu. Wisdom from a MacArthur Genius: Psychologist Angela Duckworth on Why Grit, Not IQ, Predicts Success. By Maria Popova “Character is at least as important as intellect.” 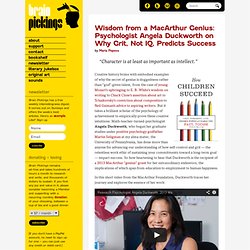 Creative history brims with embodied examples of why the secret of genius is doggedness rather than “god”-given talent, from the case of young Mozart’s upbringing to E. B. White’s wisdom on writing to Chuck Close’s assertion about art to Tchaikovsky’s conviction about composition to Neil Gaiman’s advice to aspiring writers. Diana Laufenberg: How to learn? From mistakes. Growth Mindset.