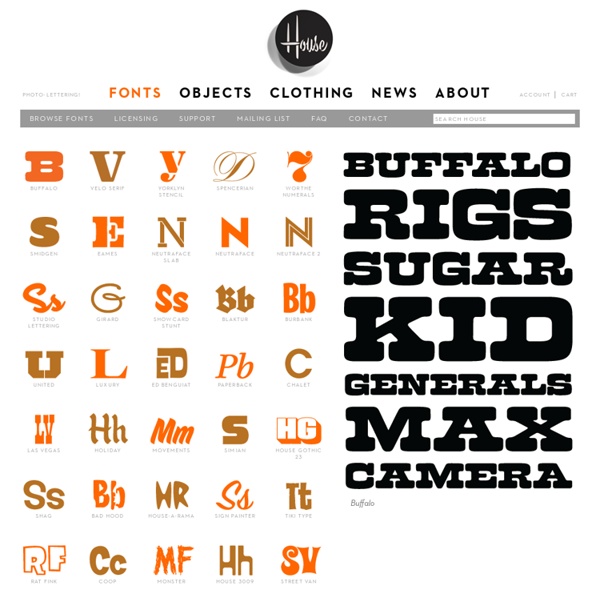 65 Beautiful Fonts You Can Download For Free Freebie 65 Beautiful Fonts You Can Download For Free by Alex on Aug 9, 2012 • 9:43 am 11 Comments There are so many free fonts all around the web these days and sometimes it makes me think is their any really point purchasing fonts. I’ve decide to collect 65 fonts which are suitable for web, print, etc just overall high fonts which can be used in design projects. Planer Font and Web Font by The Northern Block Planer Family Desktop License In A Nutshell A desktop license is the most common license and covers most commercial font usage. You can create graphical designs (logos, signs etc) and products (mugs, t-shirts, hats etc.) for yourself, or your client(s). Products may also be sold for profit as long as the letters are not the main selling point of your product (like a house number or stamp set). This license is limited by “users”. Embedding fonts is not allowed with this license with a few exceptions (such as a PDF reports).

OKO Designer Hugo Portinha send us his great font OKO: OKO is an alternative typography, without serifs and contrast. A great font for posters and branding. Exclusive Download at FreeTypography // Oko Oscar-awarded Movie Fonts 2013 – Linotype Font Feature Life of Pi After the ship he is on is wrecked, young Pi finds himself sharing the only lifeboat with a tiger. The pair spends several months together on the ocean until they are finally saved. Awarded four Oscars, including the Best Director Award, Life of Pi was thus the big winner at this year’s Oscars ceremony. The font used for the film title is very similar to Futura® by Paul Renner, although the ‘P’ and the ‘L’ have been slightly modified. Renner’s typeface is perhaps the most widely known of the artificial Grotesques designed during the Bauhaus era.

Eames Visit the Eames mini site. Eames Century Modern will endure the rigors of modern parcel delivery systems jealously guarded in a solid chunk of furniture-grade plywood. Hand printed with our signature air-dried inks in 30 different random versions, each block includes a precision-routed keyhole so it can stand (or hang) as a 21st century monument to 20th century design principles. Please allow 2-3 weeks for delivery of packaging. The special Eames Century Modern packaging will be available for a limited time.

Typographer's Glossary Serif: Serif's are semi-structural details on the ends of some of the strokes that make up letters and symbols. A typeface that has serifs is called a serif typeface (or seriffed typeface). Some of the main classifications of Serif type are: Blackletter, Venetian, Garalde, Modern, Slab Serif, Transitional, and Informal. Fonts in each classfication share certain similiar characteristics including the shape or appearance of their serifs. Serif fonts are widely used in traditional printed material such as books and newspapers. Type Worship I can’t think of a more prolific letterer and typographer in the UK right now than Rob Clarke. Although his name may not be as familiar as some of his American contemporaries, it would be hard to live in Britain and not be familiar with his logos. His lettering adorns basketfuls of supermarket products and numerous high-street shop fronts. I met up with Rob Clarke on a wet and windy morning in Clerkenwell, London.

100 Greatest Free Fonts Collection for 2012 Today we'd like to delight you with an extensive list of The Best Free Fonts for 2012. We've made a collection in which you can find Sans Serif, Slab Serif, Rounded, Modern, Display , Art Deco, Geometric, Urban, Futuristic and even abstract style types. An important part of typography is selecting the right typeface for a project.