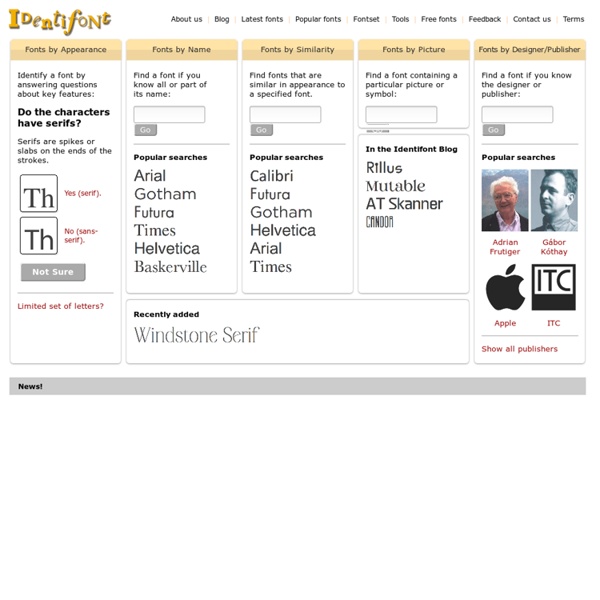 Styles, Weights, Widths — It’s All in the (Type) Family In a previous Type Basics piece we examined the difference between a typeface and a font. Both terms refer to a single manifestation of type. In this episode we look at how individual typefaces/fonts relate to each other. A quick note before we start – when we talk about typographic terms there is the official, “correct” terminology, and then there is the commonly accepted terminology. Because of the dramatic technological changes that occurred in the type industry in the previous century definitions have shifted. For example in metal type a font is one single typeface design in one specific point size, which means that metal Palatino 12 pt and Palatino 16 pt are two separate fonts.

Typographer's Glossary Serif: Serif's are semi-structural details on the ends of some of the strokes that make up letters and symbols. A typeface that has serifs is called a serif typeface (or seriffed typeface). Some of the main classifications of Serif type are: Blackletter, Venetian, Garalde, Modern, Slab Serif, Transitional, and Informal. Fonts in each classfication share certain similiar characteristics including the shape or appearance of their serifs. Serif fonts are widely used in traditional printed material such as books and newspapers. Show all Serif Didone is a typeface classification characterized by slab-like serifs without brackets; vertical orientation of weight axes.

The Complete Engraver Introducing two new typefaces – JMC Engraver & Feldman Engraver. Designed by Terrance Weinzierl, these two typefaces were commissioned as companion fonts to Nancy Sharon Collins’ new book The Complete Engraver: A Guide to Monograms, Crests, Ciphers, Seals, and the Etiquette and History of Social Stationery. Available now on Fonts.com, these fonts are FREE. Simply add to your cart, download and enjoy them in all your creative projects. The Complete Engraver charts the art of engraving, from its origin to those who carry on the tradition still today.

MainType - the best font manager I've ever seen MainType makes it simple to find, preview, organize, install, and print your fonts. MainType supports all common font formats: TrueType, OpenType, TrueType Collections, and Postscript Type 1 fonts. Unlike simple font preview applications, MainType is designed for graphic artists, typographers, and other power users who demand high-end functionality such as network support, plug-ins, advanced categorizing, searching capabilities, and fast searches for the fonts that you need. Customizable layout MainType uses an advanced docking system that allows you to configure the layout the way you want! Whether you want your panels hidden, docked, floating or in tabs it's all possible.

30 of the Best Web Typography Resources Online It seems there are two camps among web designers: those who embrace web typography, experiment with it, and try new things in virtually all of their designs; and those who avoid it like the plague, opting to use standard, web-safe font stacks with little variation. It also seems like a lot of the designers who fall into the second group wish they were more like the first. The resources below can help you improve your web typography, regardless of which camp you fall into. Asian Fonts Fonts » Asian Free Fonts Download » (539) Select page: [1] 2345... Customize preview ( Fonts by Maniackers Design - www.mksd.jp Commercial Font ) Fonts » Asian Commercial Fonts

History of Western Typography Etymology[edit] Typography (from the Greek roots τύπος typos = "impression" and -γραφία -graphia = "writing"). Medieval design roots[edit] Typography, type-founding and typeface design began as closely related crafts in mid-15th-century Europe with the introduction of movable type printing at the junction of the medieval era and the Renaissance. Handwritten letterforms of the mid-15th century embodied 3000 years of evolved letter design, and were the natural models for letterforms in systematized typography.

Introducing... The seriously minimal graphic design of Icelandic studio GUNMAD Introducing… The desk of GUNMAD GUNMAD is Guðmundur Ingi Úlfarsson and Mads Freund Brunse, one Icelandic and one Danish graphic designer working together between Rekjavík and London. Stylistically these guys are at the very edge of minimal, striving for typographic purity and structural perfection, with no white space disturbed by imagery or text unless absolutely necessary. They’re also incredibly experimental, channeling an enormous amount of energy into research in a manner that’s rarely seen outside of academic institutions.

50 Inspirational Typographic Poster Designs The art of the typeface, from the typographer who creates them down to the designer who meticulously meddles with settings to get them just right in their designs — from the size to the letter spacing to the line length — is a complicated one. Many designers get overwhelmed just trying to get the typography right on simple websites. But here we have 50 typographic posters where the art lies in not just getting the letters right, but using them to paint the picture. These posters were made by masters of typography, and showcases the letters themselves at the forefront in a way no book or website does. Take a look at this collection of inspirational typographic poster designs for your own inspiration.

Basic Tips On Typography For Web Design Sometimes even the smallest details can have a big impact on the way a website looks. Typography is a perfect example of one of those small details. It is also one of the most overlooked design elements on the majority of websites. Even if the rest of the layout and graphics are well-designed, the end result can be unattractive or difficult to read with the wrong typography. There are a number of typography tips and tricks that you can use to improve the looks and readability of your website, however. typography layouts Advertisement In print design, typography is one of the more crucial aspects. Typography is essential the practice of organizing, arranging, and modifying type. The typography techniques uesed in print has a direct impact on how the reader is able to receive the image. In print, typography doesn’t have to be plain and boring.

Hellbox The American Heritage Dictionary of the English Language, Fourth Edition, 2000. Houghton Mifflin Company. [1]Fleischman, J (1977). "A Linotypist's Notes: Being an Account of a Brief Apprenticeship in an Obsolete Trade". [2]