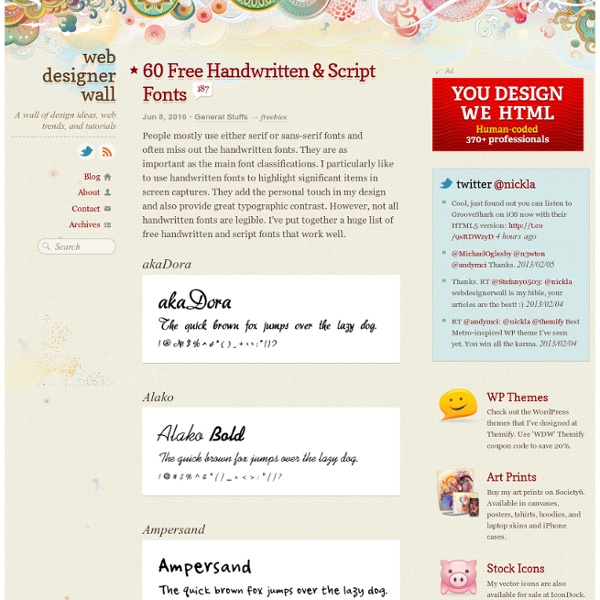 25 New Free High-Quality Fonts - Smashing Magazine Advertisement Every now and then we look around, select fresh free high-quality fonts and present them to you in a brief overview. The choice is enormous, so the time you need to find them is usually time you should be investing in your projects. We search for them and find them so that you don’t have to. In this selection, we’re pleased to present Pompadour Numeral Set, Lato, Crimson Text, Espinosa Nova, Musa Ornata, Spatha Sans, ColorLines, Roke1984, Neuton, Avro, Baurete and other fonts. New High-Quality Free Fonts Pompadour Numeral Set1 (.eps, released under Creative Commons) A beautiful numeral font released by Andy Mangold under a Creative Commons license. Lato2 (open-source sans serif) Lato is a san-serif typeface family. Crimson Text3 “Crimson Text is a font family for book production in the tradition of beautiful old-style typefaces. Color Lines5 This decorative font can be used for a variety of products, such as posters, packaging and label design. Further Resources Last Click

FreeTypography – The best free fonts, typefaces and typography Handpicked free fonts for graphic designers with commercial-use licenses. | Font Squirrel Φήμες ότι η Google ετοιμάζει τη δική της υπηρεσία κοινωνικής δικτύωσης, με το Google Me (από DownloadSquad) If you follow the rumor mill, you probably heard about Google Me a few days ago. Digg's founder Kevin Rose tweeted about it a couple of days ago. It's not that people didn't believe him, but it just seemed a bit random to come from someone like him. It's just a series of bullet points, which Adam D'Angelo says he's 'pieced together from reliable sources'. This is not a rumor. Does anyone else think that Google looks more and more like a lumbering giant that simply throws fistfuls of resources and money at its problems? (And what on earth happened to the Google-owned Orkut...?!)

Free Fonts to Download + Premium Typefaces Fascinating Business Cards Of The World’s Most Famous People Business cards can be surprisingly insightful—especially if they bear the names of history’s most famous personalities. Several fascinating name cards of the world’s most well-known people have surfaced on the internet—including contemporary tech legends and important historical figures. From Mark Zuckerberg’s provocatively worded card to Houdini’s intriguing piece of triangular cardboard, these will make valuable additions to any business card collector’s stash. You may want to keep every business card you receive from now on—because you never know which of the names printed on them will become famous in the future. [via Flavorwire, So Bad So Good] Receive interesting stories like this one in your inbox

Free Fonts for Comics and Cartoons Free Collection of Comic Fonts and Cartoon Fonts These are pretty awesome fonts if you want to design something eye-catching, something out of the ordinary. But you shouldn’t use them if you are trying to make something look elegant and classy, these are not suitable for that. I think these fonts would also work great if you use them for publishing material related to kids. And as always, you can download the all-in-one pack and you can also download each of the font separately. You might also like: Comic Fonts for Creating Street-Smart Graphics Download All Cartoon Fonts Download this Freebie Simply enter your email address and the download link will be sent right to your inbox. Maybe Maybe Not Green Piloww Chicken Butt Gretoon Destroy Cartoon Relief Mandingo Heartbreaker Kraash Oogie Boogie Speedy Fontdinerdotcom Huggable Cartoonic Massive Eyesis Depth of Toonizm Brown Bear Funk Roady Roadrunner Turtles Chubby Cheeks Rock Font

Χρησιμοποιήστε το Microsoft Office 2010 δωρεάν για 6 μήνες με το Trial Extender (από DownloadSquad) Maybe you're waffling on whether or not you want to commit to Office 2010. Maybe you just like the idea of using it for free for as long as possible. Either way, the Office 2010 Trial Extender is the tool for you. It's a simple app which performs the same trial re-arming magic you've seen before with other Microsoft offerings. By then you'll probably have made up your mind and either like Office 2010 enough to pay for it -- or be totally disenchanted and move on to an alternative suite. [via Into Windows] Tags: 2010, extender, microsoft, office, rearm, trial

45+ Exceptionally Useful Free Handwritten Fonts Should Handwritten Fonts be used in web design? For quite some time companies and governments have been working hard to make daily life things available as digital services in whatever way possible to speed processes up and cut costs. At the same time most communication takes place on digital channels by sending emails, chatting, electronic orders, paying online, doing banking online…well almost anything goes on the line today. Sending a good old snail mail letter is still possible but not that popular really. Even on vacations we are not offline and stick to digital channels, keep the blog updated with “near real time images and stories. Advertisement This article is an update of 45+ Exceptionally Useful Free Handwritten Fonts. First some inspiration on how Handwritten Fonts can be used Have you seen good use of handwritten fonts in logos, web designs, posters etc? One use of Handwritten Fonts that we see used quite often is a vision or mission statement below a company logo. Kraboudja !

9 Fresh Free Fonts for your Projects Here at WDL, we like to gather all types of freebies for our readers. We know designers need as much resources as they can get to keep their designs fresh and beautiful. Since fonts certainly play an important role in a design and also because we know you can never have enough fonts at your disposal, today we gathered a new round for you to use in your projects. Sonar Savu Condensed Sintony Calendas Plus Regular BillMoney Font Corbet Salt & Foam Bloquer Modular typeface Higher About the Author Gisele Muller loves communication, technology, web, design, movies, gastronomy and creativity. Related Posts 938 shares 10 Best New Free Fonts We’ve been on the prowl for some new free fonts to share with you. Read More 1138 shares 9 Free & Useful Fonts for your Designs Whether it’s PSD’s or icons, we love finding high quality free files and sharing them with our readers.

Update για την δωρεάν έκδοση του Foxit Reader (v. 4), αλλά προσοχή στα adware κατά την εγκατάσταση (από DownloadSquad) I got a heads-up email today that Foxit Reader -- one of the most widely-used Adobe Reader alternatives -- had released a new version. Curious, I headed over to the site to download and install the new version. After all, Foxit's popularity means our readers might be interested in reading about a major version update. During the installer's first couple of screens, the Ask toolbar was offered -- not a bit deal, really. It's included in plenty of apps nowadays. After seeing the Ask toolbar offered, I chose to do a custom install -- just in case Foxit defaulted to including anything else I didn't want. As you can see, I don't have any boxes checked on this page...A few clicks later, however: update: as Matt points out below, it's all in the wording. ... and the installer tells me it's going to install the Foxit Search Bar. Whether this is a mistake or not makes no difference to me -- and if it is a mistake, it's one that should have been detected during the testing process.

40 Free Headline Typefaces Using strong typography will increase the quality and visual appearance of your work, after all strong typographic skills are one of the many keys to great design! This round-up presents 40 beautiful fonts suitable for typographic illustrations, headlines and sub-headers. Don't get me wrong, typography isn't easy. You also need good typefaces, and unfortunately these can set you back thousands of bucks. All of these fonts have been released to the public for free. Glidesketch Glidesketch is an elegant font with rounded corners, and is great for logos, posters, motion graphics and t-shirts. Kaine Block Kaine Block is a part of the Kaine font family, and is a free bold slab-serif typeface influenced by Spaghetti Western posters of the 1960's. Museo Slab 500 The Museo Slab font family is a robust slab-serif font with Museo's friendliness. Museo 700 Museo is the mother font of Museo Slab (mentioned above). Arcus Regular Arcus Regular is part of the Arcus typeface, featuring a whopping 12 fonts.