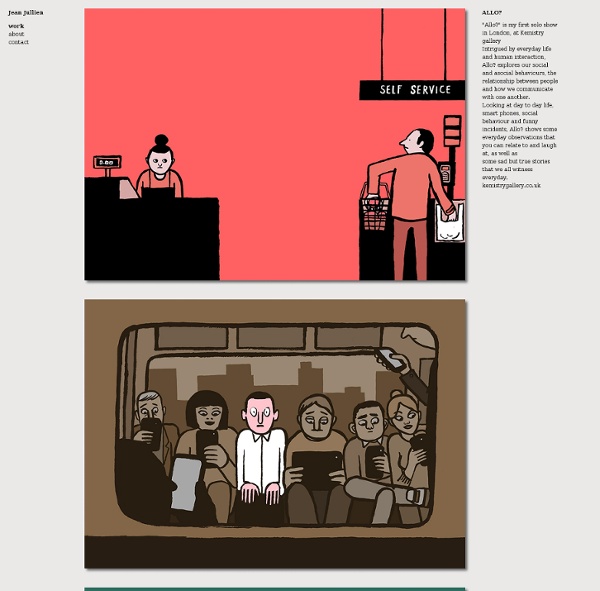 "Allo?" is my first solo show in London, at Kemistry gallery Intrigued by everyday life and human interaction, Allo? explores our social and asocial behaviours, the relationship between people and how we communicate with one another. Looking at day to day life, smart phones, social behaviour and funny incidents, Allo? shows some everyday observations that you can relate to and laugh at, as well as some sad but true stories that we all witness everyday. buy prints here: shop.jeanjullien.com/collections/allo

Dran Based in Toulouse, Dran is a multi-talented artist who uses a variety of media such as installations, paintings and drawings to convey his ironic viewpoint. After developing his skills as part of Toulouse’s renowned graffiti scene. He is also a fan of the absurd and has published a number of books featuring his funny sketches parodying everyday events with great doses of surrealism.

24 Clever Print Ads In print advertising world, agencies are bound to reflect their message solely with an image and they generally count on intelligence to accomplish this. Smart ideas on great visuals attract audience’s attention easily and they become a kind of art in the end. Here are some of the latest creations, each of which are virtual proof of what we’ve stated so far. From Athens to London – Olympic Summer Games Posters from 1896 to 2012 The 2012 Summer Olympic Games will begin tomorrow, on July 27th in London, United Kingdom. I thought it would be interesting to see how the design trends in Olympic posters have changed during the years. In this article you will find every official poster of the Summer Olympic Games from 1896 to 2012. Let the games begin! No official poster was made for the 1896 Olympic Games, but the cover page of the official report is often used to refer to the Games of the I Olympiad.

Illustrations Of Unusual And Rarely Spoken Words Recumbentibus—A knockout punch, either verbal or physical. The Irish illustration duo of James and Michael Fizgarald, or also known as The Project Twins, have come up with a series of illustrations that visually represent rarely spoken and heard of words. In their series called ‘A-Z of Unusual Words’, the meaning of the words have been visually defined in the form of a whimsical poster—which can be purchased on their website. Here are some of their ‘informative’ posters:

How To Draw "How to Draw" is a collection of tutorials that will teach you everything from perspective basics to shading chrome. Never picked up a pencil before? Fear not! From simple line drawings to modern art and easy animations, we've got you covered. Architecture Student Bought a School Bus and Turned It Into Cozy Mobile Home As a graduate architecture student, Hank was tired of seeing architecture projects that never left the drawing board. So when it came time to come up with a final project, Hank did what was obviously the only logical solution – he bought an old school bus and, together with his brother and a friend, spent 14 weeks converting it into a modern, well-designed mobile home that can host up to 12 people complete with beds, a kitchen, a bathroom and two skylights. Most of the furniture in the bus is modular, so it can be moved, stowed away or converted to different functions. The queen-sized bed can be made into a seating or dining area, and most of these modular pieces of furniture also include storage space. The kitchen consists of a pump sink with plans for an on-board refrigerator and gas cook stove in the future.

Vintage political posters Here is a selection of old Japanese posters featuring political, social and environmental messages. Sheltered Weaklings (Takashi Kono, 1953) [+] Anti-pollution poster (Kenji Ito, 1973) Against the introduction of nuclear weapons into Japan (Kinkichi Takahashi, 1960s) Anti-war poster (Kenji Iwasaki, 1960s) [+] // Give Us Back Man (Tsunehisa Kimura, 1969) [+] Gorgeous Hand Drawn Illustrations by Si Scott Here you have a series of illustrations called “animals” by Si Scott. Every design is hand drawn perfection! You can tell he has an incredible attention to detail.

Spectacular Moleskine Doodles Explode with Energy Philippines-based illustrator Kerby Rosanes proves that doodling can be so much more than scratching unintelligible scribbles on paper. Through his Sketchy Stories blog, Rosanes shares his wonderful world of doodling in a simple Moleskine sketchbook. Equipped with an ordinary Moleskine, a few Uni Pin drawing pens, and his innate gift for drawing, the artist is able to transport viewers to a world where tiny, cartoonish creatures explode with gusto to make up larger entities. Each of the illustrator's complex and crowded sketches are filled with minute details that allow the eye to wander and discover new characters and designs at every turn. The portraits are immediately mesmerizing, but even more spectacular when looked upon closely.

Charlie Layton - Drawings on the Fridge Charlie Layton – a freelance designer and illustrator from Philadelphia, USA. Each week, he draws on his refrigerator easily erasable marker. His creations Charlie every week puts on Facebook under the name “Frosty Friday”. On the creation of each of these “marker masterpieces” Charlie takes about 20-30 minutes, and it usually ends with a cup of coffee Friday morning.