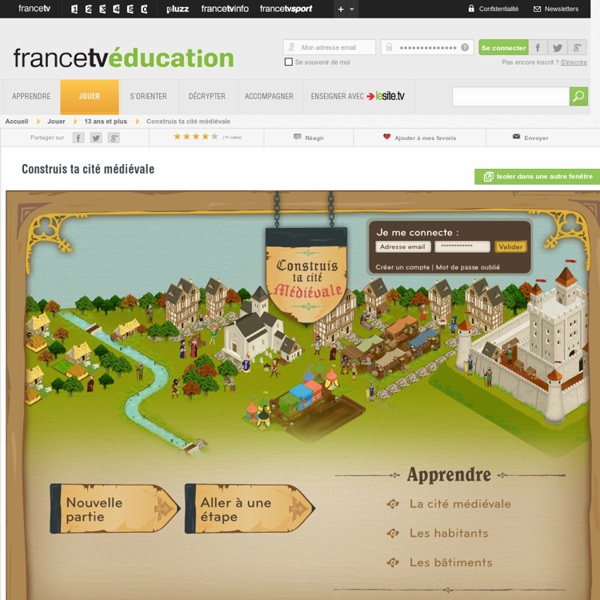 AC History Units AC History Units presents 8 units developed by the History Teachers' Association of Australia to support teachers in the implementation of the Australian Curriculum: History The development of these units has been guided by a number of ideas: Unit 1, Teaching History, is a foundation unit, providing a brief introduction to the discipline of history. It 'unpacks' the skills and concepts, surveys approaches to teaching and provides an essential framework for the other units. Units 2-8 focus on topics relevant to particular year levels and are designed to provide very practical support in the form of teaching programs, sample 'learning sequences', a wide range of resources and assessment ideas.

Accueil CancelEditDeletePreviewrevert Text of the note (may include Wiki markup) Could not save your note (edit conflict or other problem). Please copy the text in the edit box below and insert it manually by editing this page. Upon submitting the note will be published multi-licensed under the terms of the CC-BY-SA-3.0 license and of the GFDL, versions 1.2, 1.3, or any later version. This Beautiful Mexico City Building Eats The City's Smog Plenty of green buildings cut down on pollution with design features that minimize their energy usage. A tower under construction at a Mexico City hospital, on the other hand, actually eats pollution in the air that surrounds it. The Torre de Especialidades is shielded with a facade of Prosolve370e, a new type of tile whose special shape and chemical coating can help neutralize the chemicals that compose smog: and not just a small amount of them, but the equivalent produced by 8,750 1,000 cars driving by each day. The tile is the first product by Berlin-based design firm Elegant Embellishments, whose co-founder Allison Dring explained to me via email, just exactly how a 100-meter-long tile screen can suck up serious amounts of smog. When UV light cuts through smoggy air and hits the titanium dioxide on the tiles, a chemical reaction occurs between the tiles and chemicals in the smog—mono-nitrogen oxides, or NOx.

Atlantis Found: Giant Sphinxes, Pyramids In Bermuda Triangle Atlantis found in Bermuda Triangle Two scientists, Paul Weinzweig and Pauline Zalitzki, working off the coast of Cuba and using a robot submersible, have confirmed that a gigantic city exists at the bottom of the ocean. The site of the ancient city — that includes several sphinxes and at least four giant pyramids plus other structures — amazingly sits within the boundries of the fabled Bermuda Triangle. According to a report by Arclein of Terra Forming Terra, Cuban Subsea Pyramid Complex, the evidence points to the city being simultaneously inundated with rising waters and the land sinking into the sea. This correlates exactly with the Atlantis legend. The disaster may have occurred at the end of the last Ice Age.

Education for the Future: How Do We Prepare Youth for What's to Come? In a globally connected world where technology is becoming more efficient and necessary, the question that comes to mind is: Are we preparing our youth for the future? Many education specialists are predicting certain trends for the future but how will we get there? The current education model will need to be restructured to understand and attain the skills and characteristics which will be necessary for jobs in the future. Here are some teaching strategies you can easily implement to prepare your students for what’s to come.

Top 10 Civilizations That Mysteriously Disappeared Throughout our history, most civilizations have either met a slow demise or were wiped out by natural disasters or invasion. But there are a few societies whose disappearance has scholars truly stumped: 10. The Olmec The 7 Most Badass Last Stands in the History of Battle "Let me not then die ingloriously and without a struggle, but let me first do some great thing that shall be told among men hereafter." - Hector of Troy, Iliad XXII, Lines 304-5 Throughout the course of history, certain individuals have stood out as being completely fucking awesome. Whether it's cleaving monsters' faces in half with a chainsaw bayonet in Horde Mode, defending a makeshift fortress from a sea of brain-devouring zombies or manning a machine gun nest against an unstoppable sea of charging soldiers; people have always been fascinated with badass stories of one man, by himself, taking on a endless waves of assailants, refusing to back down in the face of insurmountable odds, dying with his fingers still clutching his weapons and leaving behind a smoldering, heaping pile of severed limbs, carnage and dead enemies. These are badass one-man last stands.

Top 25 Most Ancient Historical Photographs For times immemorial, people have tried to reproduce their surroundings into pictures of their own. They have used techniques of paintings, carving and sculpturing and for years images have been projected onto surfaces. Photography is the result of combining several technical discoveries. Long before the first photographs were made, Chinese and Greek philosophers described a pinole camera. But it was until Ibn – al – Haytham (965 – 1040) a Muslim scientist made significant contributions to the principles of optics and invented the camera obscura which is a prototype of today’s modern camera.

Polish archaeologists in Sudan claim 'unique' human settlement discovery PR dla Zagranicy Nick Hodge 20.02.2013 14:32 Polish archaeologists working in Sudan have found remains of human settlements that appear to date back as far as 70,000 years. 6 Famous Symbols That Don't Mean What You Think The entire point of using a symbol is that it conveys meaning and saves space -- you see one picture of a stick figure in a dress and you no longer need the phrase "This is the place where female humans can discharge waste." But what is fascinating is that sometimes the meaning of a symbol will get lost to history, but we'll just keep right on using it anyway. But would we do that if we knew ...

Sumerian Myths Sumerian civilization originated in what is now southern Iraq, just upriver from the mouths of the Tigris and Euphrates rivers. "Civilization" in this context means a settled town or city-dwelling people who possess a stable agricultural technology (including domesticated animals) and have developed a hierarchical system of social classes (peasants, laborers, slaves, craftsmen [smiths, masons, carpenters, potters, etc.], farmers, fishermen, merchants, doctors, architects, priests and temple attendants, bureaucrats, scribes, advisers, priest-kings). Since the climate of southern Iraq is hot and dry, agriculture requires an extensive irrigation system of canals and dikes. Often, the Sumerians wrote as if their civilization (agricultural techniques, cities, classes of people) came first, and people later. (Why do you think they thought this way?)

Ancient Builders Created Monumental Structures that Altered Sound and Mind, Say Researchers Hal Saflieni Hypogeum on the island of Malta By Popular Archaeology The results of recent research suggests that ancient, or prehistoric, builders of the monumental structures found in such diverse places as Ireland, Malta, southern Turkey and Peru all have a peculiarly common characteristic — they may have been specially designed to conduct and manipulate sound to produce certain sensory effects. Beginning in 2008, a recent and ongoing study of the massive 6,000-year-old stone structure complex known as the Hal Saflieni Hypogeum on the island of Malta, for example, is producing some revelatory results. Like its related prehistoric temple structures on Malta, this structure features central corridors and curved chambers. But this structure is unique in that it is subterranean, created through the removal of an estimated 2,000 tons of stone carved out with stone hammers and antler picks.