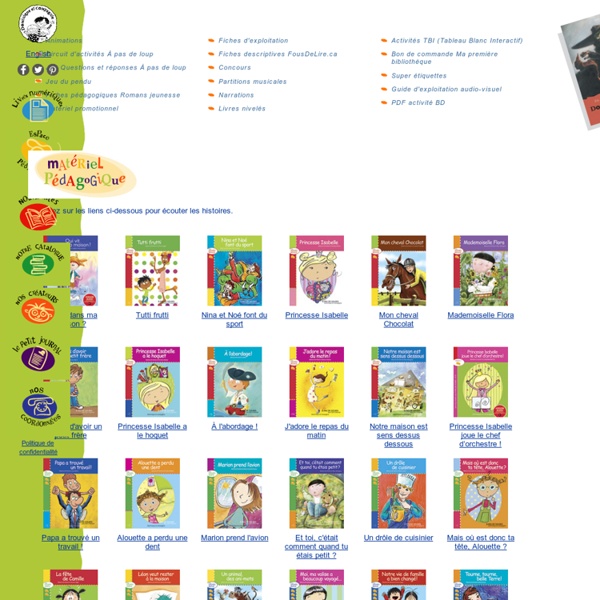 OU vs U - Minimal Pairs - Lawless French Pronunciation The French u is one of the most difficult sounds for English speakers, and as an added bonus, can be difficult to distinguish from ou. The letter combination ou, IPA [u], is the easier of the two sounds. It’s similar to the ou in "you" except it does not diphthong into [w] at the end – learn more. Learn French with French Children's Stories - The French Experiment Some well-known children's stories translated into French and spoken by a native French speaker. Great for kids... and adults too! Read along in French or English. Les Trois Petits Cochons The Three Little Pigs Once upon a time there were three pigs who decide to build their own houses, only to run afoul of a wolf with an insatiable love for des côtelettes de porc.

How To Make 2017 A Successful Year: 17 Top Resources To Help You Learn French “This year, I will become fluent in French!” Great. This post will help you l’ami(e). l'accentuation l'accentuation In French, stress (l'accentuation) is placed on the final syllable of a word. This is very different from the placement of stress in English which varies according to the word itself.

The Best Way To Study French For Listening and Understanding - Learn French Most students – no matter their level – tell me “I listen to French radio, or watch movies in French,” and this statement is usually followed by “it’s so frustrating”... There is however a simple method to better your French understanding skills: follow my precise tips. Understanding French people speaking full speed is your goal, but by no means is watching French movies the right path to get there. It’s as if you gave Shakespeare to read to a first grader.