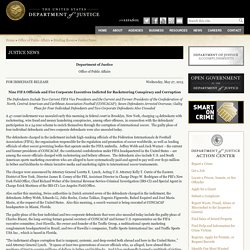 The guilty pleas of four individual defendants and two corporate defendants were also unsealed today. The charges were announced by Attorney General Loretta E. Bribe upon bribe upon bribe: how Fifa and its cronies carved up football. The case against Jack Warner The US district court alleges massive corruption by Warner within its prosecution of 14 people, including serving and former high-ranking Fifa officials and sports marketing company executives alleged to have paid bribes. 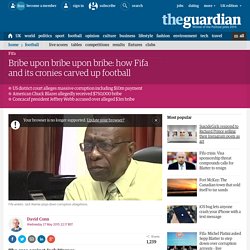 As president from 1990 of the Confederation of North, Central America and Caribbean Association Football (Concacaf) and a Fifa executive committee (exco) member, Warner from the early 1990s “began to leverage his influence and exploit his official positions for personal gain”, the indictment alleges. His demand for and receipt of bribes, the authorities allege, was a key part of a 24-year racketeering and bribery conspiracy, dating from 1991 to 2015, which led to “endemic corruption” of Fifa itself. Martyn Ziegler on Twitter: "Joint statement from QPR + FL says no FFP charges to be brought until outcome of legal action by club challenging legality of the rules." David Leaver sur Twitter : "Excellent @bodenknights... David Squires on … Mike Ashley's reign at Newcastle. Premier League TV gold rush goes on. "It's fantastic," enthused Jorge Mendes. 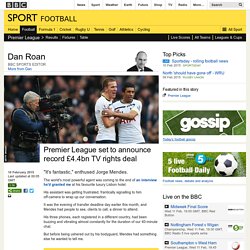 The world's most powerful agent was coming to the end of an interview he'd granted me at his favourite luxury Lisbon hotel. His assistant was getting frustrated, frantically signalling to him off-camera to wrap up our conversation. It was the evening of transfer deadline day earlier this month, and Mendes had people to see, clients to call, a dinner to attend. His three phones, each registered in a different country, had been buzzing and vibrating almost constantly for the duration of our 40-minute chat.

But before being ushered out by his bodyguard, Mendes had something else he wanted to tell me. "The way you put matches on at midday to suit the Asian market. "The Premier League is doing a brilliant job. FutureSport Magazine sur Twitter : "Top 10 most followed #football clubs on Twitter. The La Liga giants lead by a landslide; @FCBayern not even there. Price of Football: Ticket increases outstrip cost of living. The average price of the cheapest tickets across English football has risen at almost twice the rate of the cost of living since 2011. 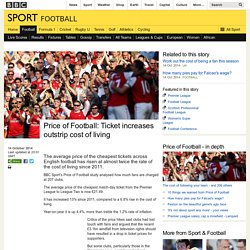 BBC Sport's Price of Football study analysed how much fans are charged at 207 clubs. The average price of the cheapest match-day ticket from the Premier League to League Two is now £21.49. It has increased 13% since 2011, compared to a 6.8% rise in the cost of living. Year-on-year it is up 4.4%, more than treble the 1.2% rate of inflation. Play media Price of Football 2014: What makes the perfect football pie? Manchester United earns 11% of European club sponsorship revenue. Thu 2nd Oct 2014 | Football Sponsorship A new Sponsorship Today report shows that Manchester United now earns 11% of all sponsorship income across Europe's six major leagues. 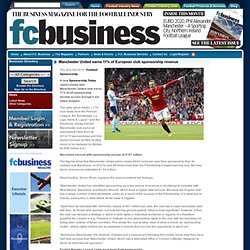 The data, which tracks 1,179 club deals from the Premier League, the Bundesliga, La Liga, Serie A, Ligue 1 and the Eredivisie, shows that the Manchester club earns an estimated €146m from its 2014/15 sponsorships and that doesn't include its Nike kit deal (soon to be replaced by Adidas for €96 million p.a.) Barcelona second with sponsorship income of €107 million The figures show that Manchester United earns nearly €40m more per year from sponsorship than its nearest rival Barcelona, on €107m and 95 times more than the Premiership's lowest earning club, Burnley, which receives an estimated €1.54 million. Report author, Simon Rines, explains the reasons behind the findings. SwissRamble : Similar story for PL... Liverpool announce annual loss of £50m in new club accounts. Liverpool made a £50m loss in the 2012-13 financial year, according to the club's annual accounts. 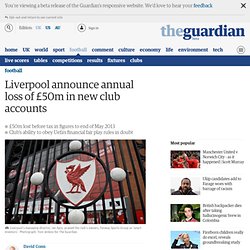 The figures, for the year to 31 May 2013, show that the club made an operating profit of £15m but were pushed into the heavy loss by the writing down of players' contracts, an accounting requirement, and a £13m loss on the sale of players. The £50m loss, which follows £41m reported for a ten-month period to 31 May 2011, appears to put Liverpool's total loss very much higher than the €45m (£37m) total permitted by Uefa for this two-year period under its financial fair play rules. The club, which stated that the figures show it is making "good progress" financially, did not comment on whether it is likely to be considered in breach of FFP when Uefa assesses clubs in the next two months. 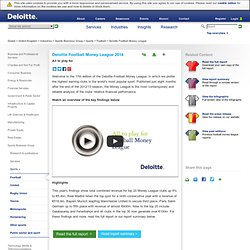 Published just eight months after the end of the 2012/13 season, the Money League is the most contemporary and reliable analysis of the clubs’ relative financial performance. Record turnover for FC Bayern. BackBundesliga | 13.11.2013 20:08:42 FC Bayern were successful not only on the pitch last season Munich - Quadruple-winners and current Bundesliga leaders FC Bayern München are not only in good health on the pitch, they are also in astonishing financial shape too. 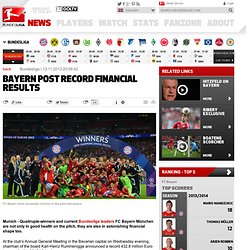 At the club's Annual General Meeting in the Bavarian captial on Wednesday evening, chairman of the board Karl-Heinz Rummenigge announced a record 432.8 million Euro turnover for the 2012/13 business year. Jaw-dropping figures Post-tax profits stood at 14m Euro, bolstering the club's coffers to a hearty 135m Euro. Turnover and profit increased by 59.4m Euro and 12.7m Euro respectively compared to the previous year, and Bayern have 286.8m Euro of equity. Fulham agree sale to the Jacksonville Jaguars owner Shahid Khan. Mohamed Al Fayed has brought his colourful 16-year association with Fulham to an end after sanctioning the sale of the Premier League club to the United States-based billionaire Shahid Khan. The deal was formally announced on Friday night and Fayed will give a photo call at Craven Cottage on Saturday afternoon, with the deal, which has been sanctioned by the Premier League, understood to be worth up to £200m. That would effectively match the amount loaned to the London club by the Egyptian businessman since he bought them as a third-tier side in 1997.

QPR accounts show wage bill doubled even before January's spending. The scale of the challenge facing QPR if Harry Redknapp fails to keep them in the Premier League is laid bare in newly published financial results for last season, which show their wage bill doubled even before the latest spending spree. The accounts, for the year ending 31 May 2012, show that the club's wage bill almost doubled from £27.6m to £58.5m in their first year back in the Premier League under Neil Warnock and Mark Hughes. Thanks to increased TV income, revenue rose sharply from £16.2m to £64m. Premier League agrees new financial regulations. Clubs accused of breaking FFP rules to discover fate next month. Fri 5th Oct 2012 | Money & Finance The 23 clubs that have been accused of breaking UEFA’s Financial Fair Play (FFP) rules will discover their fate early next month. 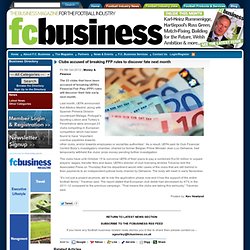 Last month, UEFA announced that Atletico Madrid, along with Spanish Primera Division counterpart Malaga, Portugal’s Sporting Lisbon and Turkey’s Fenerbahce were amongst 23 clubs competing in European competition which had been found to have “important overdue payables towards other clubs, and/or towards employees or social/tax authorities”. As a result, UEFA said its Club Financial Control Body’s investigatory chamber, chaired by former Belgian Prime Minister Jean-Luc Dehaene, had temporarily withheld the clubs’ prize money pending further investigation. 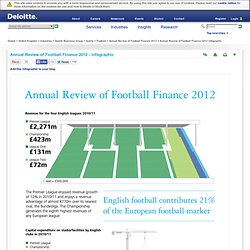 Simply copy the below code and paste it into your website. Annual Review of Football Finance 2012. Nottingham Forest sold to Al-Hasawi family. Revealed: the financial health of the Premier League laid bare. James Lawton: Premier League is to blame for owners acting like headless chickens - News & Comment - Football. Or then, when you think about it, perhaps not. Dave King fears liquidation for Rangers. Wed 7th Mar 2012 | Football Club Administration Rangers director Dave King believes it is "inevitable" the club will plunge into liquidation after administrators were called in at Ibrox.

South Africa-based King, the only survivor from the Sir David Murray era on the board, announced his intention to sue the former Rangers owner and criticised Craig Whyte after the SPL champions entered administration last month. In a 1500-word statement, King said: "I do not believe that there is a reasonable prospect that the company can come out of administration. Portsmouth back on brink as extent of club's mishandling is laid bare. A young Portsmouth fan strikes a defiant note during a recent game at Fratton Park. Photograph: James Benwell/Action Images Portsmouth's administrator, Trevor Birch, evidently feels his gloomy message from shell-shocked Fratton Park has not been fully digested, so he decided to spell it out, alarmingly.

Two years after their last existence-threatening crisis, Pompey, formed in 1898, really could go bust this time. In administration for the second time in two years following the arrest for alleged bank fraud of their most recent owner, the Russian Vladimir Antonov, Portsmouth do not have enough money to see them through until the end of the season.

Supporters have access to official statistical information including fixtures, results, tables and player appearances, plus squad details, ticket information, Club history and teamsheets. The Blackberry application, which is available from the App Store, joins the hugely successful iPhone and Android apps.