Image uploaded by @poida (poida ☯) How Warren Buffett made 94 per cent of his wealth after he turned 60: Mayers. Zoom People often think there’s more power in investing than in saving, but it’s not true. 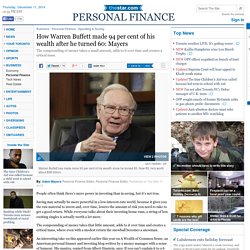 Saving may actually be more powerful in a low-interest-rate world, because it gives you the raw material to invest and, over time, lowers the amount of risk you need to take to get a good return. While everyone talks about their investing home runs, a string of less exciting singles is actually worth a lot more. The compounding of money takes that little amount, adds to it over time and creates a critical mass, where even with a modest return the snowball becomes a snowman. An interesting take on this appeared earlier this year on A Wealth of Common Sense, an American personal finance and investing blog written by a money manager with a sense of humour. The article noted that 25 years ago, as Warren Buffett turned 60, his net worth was $3.8 billion. Okay, most of us don’t have $3.8 billion to put down. The reason you win by starting young with just small amounts is that time is on your side.

Financial Docs: How Long Should You Store Them? Why And How To Choose A Financial Advisor. Everything You Need to Know About Bitcoin in 2 Minutes. Burgernomics: Which country has the cheapest Big Mac? - Jan. 24, 2014. The cheaper the Big Mac, the more undervalued the currency. 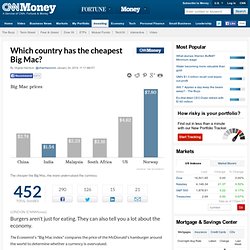 LONDON (CNNMoney) The Economist's "Big Mac index" compares the price of the McDonald's hamburger around the world to determine whether a currency is overvalued. So which country has the cheapest Big Mac? India takes the crown. You can pick up chicken- or mutton-based Maharaja Macs for just $1.54. Burger lovers will need deeper pockets in Norway, where a Big Mac costs a whopping $7.80. For nearly 30 years The Economist has used the index as a lighthearted way to determine whether currencies are trading at the "correct" level. Here's how it works: right now the average price of a Big Mac in America is $4.62; in China its $2.74.

According to the index, that makes the yuan undervalued by 41%. Related: Japan's Abe: I am beating deflation. Understanding the Bitcoin Boom. Reporters working tech and financial beats are paying close attention to the relatively new digital currency known as Bitcoin. 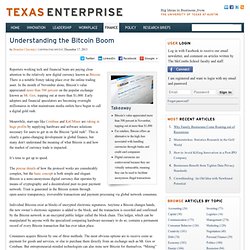 There is a notable frenzy taking place over the online trading asset. In the month of November alone, Bitcoin’s value appreciated more than 500 percent on the popular exchange known as Mt. Gox, topping out at more than $1,000. Early adopters and financial speculators are becoming overnight millionaires in what mainstream media outlets have begun to call a digital gold rush. Meanwhile, start-ups like Coinbase and KnCMiner are raking in huge profits by supplying hardware and software solutions necessary for users to get in on the Bitcoin “gold rush”.

It’s time to get up to speed. Individual Bitcoins exist as blocks of encrypted electronic signatures. What is Bitcoin? - We Use Coins. Understanding the Bitcoin Boom. Feed the Pig. Five Ways To Avoid The Top Money Scams. Why We Didn’t Learn Enough From the Financial Crisis - Justin Fox. By Justin Fox | 1:51 PM September 13, 2013 “Liquidate labor, liquidate stocks, liquidate real estate,” Treasury Secretary Andrew Mellon may or may not have told Herbert Hoover in the early years of the Great Depression. 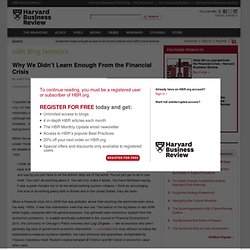 “It will purge the rottenness out of of the system.” This is what has since become known as the “Austrian” view (although most of its modern proselytizers are American): economic actors need to learn from their mistakes, “malinvestment” must be punished, busts are needed to wring out the excesses created during boom times. Within the economic mainstream, there is some sympathy for the idea that crisis interventions can create “moral hazard” by bailing out the irresponsible.

But the argument that financial crises should be allowed to wreak their havoc unchecked has few if any adherents. I think the Austrian business-cycle theory has done the world a great deal of harm. The Cause of Bubbles =Investment vs Financial Engineering. Let me get this straight. 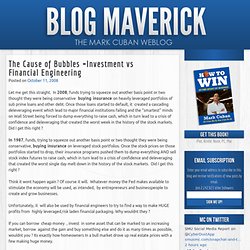 In 2008, funds trying to squeeze out another basis point or two thought they were being conservative buying insurance on heavily leveraged portfolios of sub prime loans and other debt. Once those loans started to default, it created a cascading deleveraging event which lead to major financial institutions failing and the “smartest” minds on Wall Street being forced to dump everything to raise cash, which in turn lead to a crisis of confidence and deleveraging that created the worst week in the history of the stock markets.

Did I get this right ? In 1987, funds, trying to squeeze out another basis point or two thought they were being conservative, buying insurance on leveraged stock portfolios. Think it wont happen again ? Unfortunately, it will also be used by financial engineers to try to find a way to make HUGE profits from highly leveraged,risk laden financial packaging. Hell yes you would.