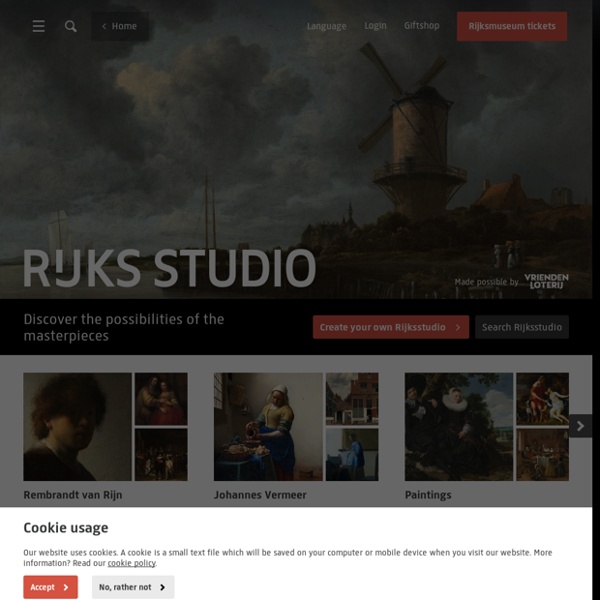 The Met 360° Project This award-winning series of six short videos invites viewers around the world to virtually visit The Met's art and architecture in a fresh, immersive way. Created using spherical 360° technology, it allows viewers to explore some of the Museum's iconic spaces as never before. Viewed more than 11 million times, this series affords an access and a perspective typically unavailable to the public. Viewers can experience the magic of standing in an empty gallery after-hours, witnessing a bustling space in time-lapse, or floating high above The Met Cloisters for a bird's-eye view. We strung cables, removed protective covers from works of art, and rigged cameras up high, all to allow viewers to explore The Met as never before. Get a behind-the-scenes look at how we created the videos in a Digital Underground article written by Director/Producer Nina Diamond.

The National Gallery of Art Releases Over 45,000 Digitized Works of Art Vincent van Gogh, “Self-Portrait” 1889, oil on canvas. Collection of Mr. and Mrs. John Hay Whitney As esteemed art museums continue to digitize their archives, it’s becoming more and more effortless to view and learn about famous artworks by the world’s master painters, sculptors, and printmakers. MoMA The Museum of Modern Art, New York, United States Founded in 1929, The Museum of Modern Art (MoMA) in midtown Manhattan was the first museum devoted to the modern era. Today MoMA’s rich and varied collection offers a panoramic overview of modern and contemporary art, from the innovative European painting and sculpture of the 1880s to today's film, design, and performance art. From an initial gift of eight prints and one drawing, the collection has grown to include over 150,000 paintings, sculptures, drawings, prints, photographs, architectural models and drawings, and design objects; approximately 22,000 films and four million film stills; and, in its Library and Archives, over 300,000 books, artist books, and periodicals, and extensive individual files on more than 70,000 artists.

J. Paul Getty Museum publishes more than 30,000 images using IIIF LOS ANGELES, CA.-The Getty today made available more than 30,000 images of objects in the J. Paul Getty Museum collection using the International Image Interoperability Framework (IIIF), which allows researchers to bring together images from different institutional websites for comparison, manipulation and annotation. By clicking on the IIIF logo next to an image, users can pull together images from different collections, dragging and dropping millions of images and associated metadata from institutions across the world for side-by-side analysis. As a result, for the first time, users can digitally examine works of art held in separate collections worldwide and easily share their findings.

Guggenheim Collection Online Featuring nearly 1600 artworks by more than 575 artists, the Collection Online presents a searchable database of selected artworks from the Guggenheim’s permanent collection of over 7,000 artworks. The selected works reflect the breadth, diversity, and tenor of the Solomon R. Guggenheim Foundation’s extensive holdings from the late 19th century through the present day, and are continually expanded to include a larger representation of the museum’s core holdings as well as recent acquisitions. In addition to highlights from the Solomon R. Guggenheim Museum, New York, the Collection Online includes works from the Peggy Guggenheim Collection, Venice, and the Guggenheim Museum Bilbao. Visitors may browse by artist, date, artwork type, movement, or by several of the major groups of acquisitions that have entered the holdings of the foundation since its inception in 1937.

Leopold Museum, Vienna, Autriche It took five decades to compile the collection. In 2001 it found its definite location. Together with the Republic of Austria and the Austrian National Bank, the collector Dr. Getty Research Portal - 100,000 Digitized Art History Books Are Now Freely Available to Any Art Lover “Paul Klee, 1879-1940 : a retrospective exhibition.” The Guggenheim Museum In celebration of its 4th anniversary, the Getty Research Portal has been redesigned to make it easier for art history buffs to explore, share, and download the 100,000 freely available digitized art history texts it hosts—which you can search for directly, or filter by creator, subject, language, source, or date range. Over the past year, the Los Angeles-based research institute has been rapidly scanning thousands of books and journals documenting various artistic fields—including art, architecture, and culture—to provide a greater public service over the Internet than a single library ever could. Thanks to the freely downloadable materials, “scholars and researchers can now be in possession of copies of rare books and other titles without having to travel to far-flung locales,” announced the the project’s content specialist, Annie Rana.

Millions of Objects at 14 Art Institutions to Be Digitized for Online Database A new database launched by an international consortium of art institutions is working to grant internet users unprecedented access to dozens of art historical photo archives, which capture multiple images of a single artwork over time. Collectively known as PHAROS, the group is gradually digitizing millions of images, many of which are previously unpublished and accessible only through physical visits to individual research repositories. The 14 institutions involved include the Frick Collection (which is leading the project), Rome’s Bibliotheca Hertziana, the Courtauld Institute, Getty Research Institute, Paris’s Institut national d’histoire de l’art, Washington D.C.’s National Gallery of Art, and the Yale Center for British Art. All this information will help you track various copies of a single artwork by different artists.

MetPublications - Full text books online "The 1688 Paradise Lost and Dr. Aldrich": Metropolitan Museum Journal, v. 6 (1972) Boorsch, Suzanne (1972) 20th-Century Art: A Resource for Educators Paul, Stella (1999) Borderless Bacteria / Colonialist Cash – Ken Rinaldo Scientists have identified up to 3000 types of bacteria on dollar bills from just one Manhattan bank. Most of the bacteria found were skin, mouth and vagina microbes according to a study conducted by the New York University Center for Genomics & Systems Biology. Bacterial cultures, fungi, and viruses finding transport on monetary exchange systems do not respect or understand borders. There are no visas or passports for microbes that hitch rides from hands, noses, and genitalia. Money travels freely nationally and internationally. Cash is a vector of biological cultures traded globally.

Download 50,000 Art Books & Catalogs from the Metropolitan Museum of Art's Digital Collections If you’ve lived in or visited New York City, you must know the laughable futility of trying to “do the Met” in a day, or even a weekend. Not only is the museum enormous, but its permanent collections demand to be studied in detail, an activity one cannot rush through with any satisfaction. If you’re headed there for a special exhibit, be especially disciplined—make a beeline and do not stop to linger over elaborate Edo-period samurai armor or austere Shaker-made furniture. I thought I’d learned my lesson after many years of residence in the city. When I returned last summer for a visit, family in tow, I vowed to head straight for the Rei Kawakubo exhibit, listing all other priorities beneath it.

Museo Reina Sofia, Madrid Founded in 1990 after originally being created as an art centre, Museo Reina Sofía is among the culminating events of the Spanish transition to democracy, recovering Pablo Picasso's Guernica as well as an outstanding representation of the international avant-gardes and neo-avant-gardes. In short, the founding of this museum means the recuperation of the experience of modernity previously missing from the Spanish context and the opportunity to try out new models of narration from a periphery that is neither lateral nor derivative, but is rather an entry way for new stories, historiographic models and artistic episodes that tip the balance of the orthodox canon of the main museums. The institution no longer considers its task to be simply the transmission of culture.

Letters Between Dante Gabriel Rossetti and His Model Fanny Cornforth Are Now Online Fanny Cornforth is often remembered only through her presence in the paintings of Pre-Raphaelite artist Dante Gabriel Rossetti, her mass of flowing hair one of the most recognizable visuals in his 19th-century work. A newly digitized archive at the Delaware Art Museum (DAM) adds her voice to her history as an artist’s model and muse. Cornforth’s correspondence with Rossetti is featured in the Samuel and Mary R. Bancroft Pre-Raphaelite Manuscript Collection, part of the initial 500 items available in DAM’s digital collections portal.