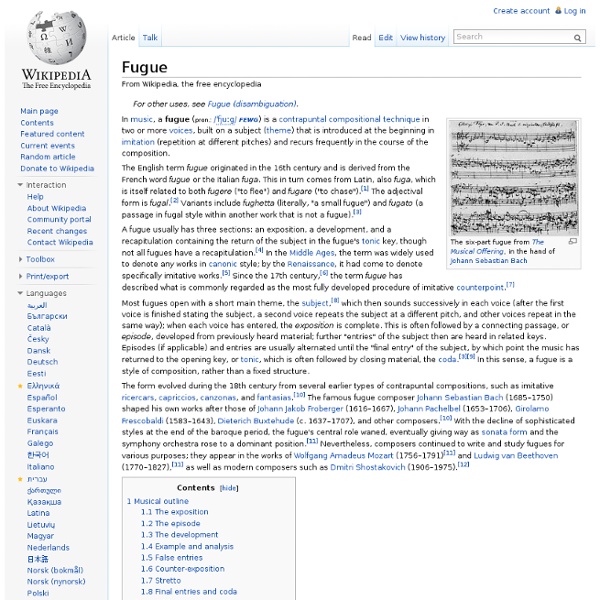 The English term fugue originated in the 16th century and is derived from the French word fugue or the Italian fuga. This in turn comes from Latin, also fuga, which is itself related to both fugere ("to flee") and fugare ("to chase").[1] The adjectival form is fugal.[2] Variants include fughetta (literally, "a small fugue") and fugato (a passage in fugal style within another work that is not a fugue).[3] Musical outline[edit] A fugue begins with the exposition and is written according to certain predefined rules; in later portions the composer has more freedom, though a logical key structure is usually followed. Further entries of the subject will occur throughout the fugue, repeating the accompanying material at the same time.[13] The various entries may or may not be separated by episodes. What follows is a chart displaying a fairly typical fugal outline, and an explanation of the processes involved in creating this structure. The exposition[edit] Example of a tonal answer in J.S. listen

Baroque and the fugue One of the most characteristic forms of music of the Baroque era is definitely the complex and polyphonic fugue. It is built of many independent equally important melodies that are masterely combined with each other into an extravaganza of polyphony. The kind of polyphony used in the fugue form is imitative. Imitation can be made strict or not strict, and fugues use the latter form most of the time (strict imitative polyphony is found in a canon). Fugue is therefore a very complex work, as non-strict imitative polyphony requires compositional skills that go beyond simple melody and accompaniment. Fugues go well beyond that, and for the beginning listeners of fugues they sound very uncomprehendable and hard to grasp.

10 Great Fugues Not By Bach The Arts This lister originally intended to write a list of the ten greatest fugues ever, but all ten, and the next 300 or so, would be by Johann Sebastian Bach. So for some interesting diversity, here are ten outstanding fugues from other composers. These are not the ten greatest that are not by Bach, but simply ten great fugues. Certainly, many worthy examples have been left off, so you are invited to mention your choices. Fugue in C Major

Bach: The Art of the Fugue - Baroque Music Club BACH 730 The cover of our CD booklet features the roofscape of the Grand Colonnade at the Czech Spa of Marienbad (Marianske Lazne). Its structure combines complexity and structural integrity with beauty – indeed the two are inter-dependent, and each may be considered the result of the other. Thus with the Art of the Fugue; this is some of the most structured, and structurally complex music ever composed, yet in its complexity and structural integrity lies the secret of its beauty, a beauty which can indeed be experienced and enjoyed without any knowledge or awareness of the underlying structure whatsoever. The relationship between structure and emotion was expressed indirectly by Bach during the artistic dispute between himself and Scheibe during the years 1737-1739:

The Fugue - The Baroque Fugue The fugue is a type of polyphonic composition or compositional technique based on a principal theme (subject) and melodic lines (counterpoint) that imitate the principal theme. The fugue is believed to have developed from the canon which appeared during the 13th century. The canon is a type of composition wherein the parts or voices have the same melody, each beginning at a different time. The fugue also has its roots from the ensemble chansons of the 16th century as well as the ricercari of the 16th and 17th centuries. The fugue has several different elements: Exposition - The first section of the fugue wherein the subject is stated.Subject - The principal theme or main idea; the first statement of the subject is usually by a single voice.Answer - The second statement of the subject transposed to the dominant key; it may either be a real answer or a tonal answer.

Bach Art of Fugue Musical Notes for harpsichord or pedal-harpsichord. Including a note by Isolde Ahlgrimm “The Art of the Fugue” (Die Kunst der Fuge), as its name implies, was intended and effectively provides, a complete treatise on the art of fugal composition, dealing with every type of fugal treatment from the simplest to the most complex. It may be supposed that Bach had intended to have this work published under his instruction. He had since 1720 been publishing periodic treatises on different styles of composition “for connoisseurs and amateurs” under the series title Clavierübung or Keyboard Exercise.