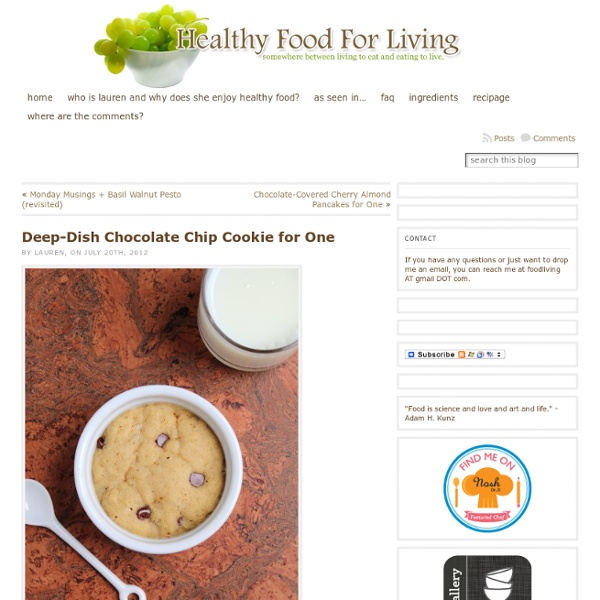 By Lauren Zembron, on July 20th, 2012 I know, I know… it seems as though I’ve been posting sweet recipe after sweet recipe (with a little something cheesy thrown in); but you see, after what seemed like a long time during which sweets were unappealing during my first trimester, (what can I say, pregnancy does some strange things to your body!), they’re apparently back with a vengeance on my appetite’s menu. Sooooo if you’re a sweet freak like me, all I can say about my recent recipe post pattern is: you’re welcome. And if you’re not? I’m sorry. Now let’s get to this deep-dish cookie. Jenny from Picky Palate recently posted a recipe for a microwavable chocolate chip cookie made in a ramekin that looked so unbelievably delicious I had to make my own (slightly healthier) version. I cut out half of the sugar, subbed in whole wheat pastry flour, and used grain-sweetened chocolate chips (which have less sugar than semi-sweet chips). Now I’m under no delusion that even my version is healthy.

2-Minute Chocolate Chip Cookie For One This is one of those ‘I-need-a-cookie-right-now-or-I-die’ recipes that can be prepared in almost no time.We all know that kind of situation, don’t we? I definitely do, I confess.And you know what? This impressive cookie not only takes less than 5 minutes to prepare, it tastes really delicious. Just like a good chocolate chip cookie.The preparation is beyond easy… just have a look… First you need this stuff. Two Peas & Their Pod » Chocolate Chip Salted Caramel Cookie Bars » Print Saturday was a rough day. Long story, but we have been having problems with our hosting company so we decided to switch to a new company. Well, the transition didn’t go too smoothly. We spent the majority of the weekend on the phone trying to figure things out. Sorry to anyone who tried to access our site and got an error message.

Nutella Cupcakes With Philly Cream Cheese Nutella Frosting! — A Happy Hippy Mom My daughter is a Nutella freak and just loves the creamy chocolaty spread! She would take a jar of it to school and her classmates would pass it around during lunch and eat it straight from the container. Probably not the most sanitary thing to do, but teens live for the moment and don’t put much thought into that kind of stuff. I wanted to bake my daughter something special, so I decided to search for recipes using Nutella and found Self Frosting Nutella Cupcakes at Baking Bites. Nutella Self Frosted Cupcakes 10 tbsp(140 grams) butter, softened

Chocolate Chip Salted Caramel Cookie Bars Chocolate Chip Salted Caramel Cookie Bars Saturday was a rough day. Long story, but we have been having problems with our hosting company so we decided to switch to a new company. Well, the transition didn’t go too smoothly. We spent the majority of the weekend on the phone trying to figure things out. 10 AWESOME Nutella Recipes Ten awesomely delicious recipes using your favorite chocolate hazelnut spread, Nutella: Nutella Rice Krispy Treats get thisNutella Rice Krispy Treats

Chocolate Chip Cookie Dough Peanut Butter Cups Soooooo… you know that episode of Sex and the City where Miranda has to dump dish soap on top of chocolate cake just so she will stop eating it?? Uh. Yeeeeeah. These are like… of that caliber. And that totally almost happened to me. You PROBably should not make these if you are home alone for four days.

Dimitri Vegas & Like Mike Tomorrowland Anthem 2012 (Original Mix) Posted in: Bangers, House, Music | No Comments | August 7, 2012 Gary New House Two pivotal members of last year’s “Tomorrowland” anthem team, and Belgium natives, are back for this year’s installment to the festival’s official anthem, and I’m feeling it. I’m not sure I’m ready to give it “anthem” status, as I don’t use that term loosely, but it will absolutely make the rotation on my iPod. This year’s stage and production was just absurd, and given the lineup and buzz the Belgium based festival has attracted over the past couple of years there’s no doubt that Tomorrowland is one of the world’s premier music events, in the discussion with the Ultra, EDC and Sensation.

what goes into making chocolate bowls Leave it up to me to mess up every recipe in the world... but on the flipside, by experiencing everything that goes wrong, I end up learning the most.I had seen these bowls from Stephanie's Kitchen, and decided it was a fantastic idea for my food independent study. ingredients: chocolate, and balloons! first, a giant bar of chocolate all the way from taiwan! Toffee White Chocolate Chip Oatmeal Cookies I love oatmeal cookies and I think they’re perfect for the holiday season. They’re very versatile; you can add almost any combination of things to them. I decided that toffee and white chocolate chips pair together really well, so I thought, why not throw them into some oatmeal cookies? The toffee melts a bit while it bakes, mixing in with the rich white chocolate chips and soft, chewy oatmeal cookie base, which has a hint of cinnamon and nutmeg.

Cheesecake Stuffed Strawberries. What? Yes! - SugarBlog - SugarDerby Um... ok. Why didn't I think of this?!?!?! Of course you can hollow out a strawberry and stuff it full of cheesecake. Of course you can!!! And just in time for Valentine's Day... perfect excuse to make them!