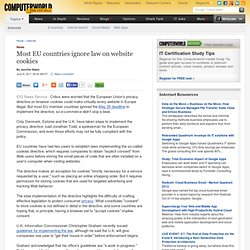 But most EU member countries ignored the May 25 deadline to implement the directive, so e-commerce didn't skip a beat. Only Denmark, Estonia and the U.K. have taken steps to implement the privacy directive, said Jonathan Todd, a spokesman for the European Commission, and even those efforts may not be fully compliant with the policy. EU countries have had two years to establish laws implementing the so-called cookies directive, which requires companies to obtain "explicit consent" from Web users before storing the small pieces of code that are often installed on a user's computer when visiting websites. The directive makes an exception for cookies "strictly necessary for a service requested by a user," such as placing an online shopping order. U.K. Graham acknowledged that his office's guidelines are "a work in progress. "

First European cookie fine issued by Spanish data protection aut. European data protection authorities to ramp up enforcement of cookie rules. In her speech addressing the Lex Mundi Intellectual Property Section (at the invitation of member Alston & Bird) on Friday, September 26, 2014, Florence Raynal, head of France’s data protection authority, Commission Nationale de L’informatique et des Libertés (CNIL), made it clear that France and other European countries would be focused on coordinated efforts to enforce privacy rights for individuals, including between the European Union (EU) and the United States, France and the Asia-Pacific Economic Cooperation (APEC), and France and Francophone countries. 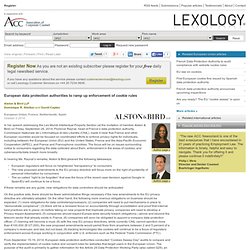 The focus will be on issues surrounding notice to consumers regarding the data collected about them, enforcement in the areas of cookies, and cybersecurity/data breach more broadly. In hearing Ms. Raynal’s remarks, Alston & Bird gleaned the following takeaways: If these remarks are any guide, new obligations for data controllers should be anticipated. Cookie Notice and Consent Rules. 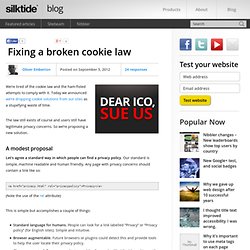 Today we announced we’re dropping cookie solutions from our sites as a stupefying waste of time. The law still exists of course and users still have legitimate privacy concerns. So we’re proposing a new solution. A modest proposal Let’s agree a standard way in which people can find a privacy policy. <a href="privacy.html" rel="privacypolicy">Privacy</a> (Note the use of the rel attribute) This is simple but accomplishes a couple of things: Standard language for humans. We also think any privacy policy should pass a simple test: your grandmother could understand it. Cookie law – a neater approach is needed. The EU ‘cookie law’ is already teetering on the brink of total and abject failure (see the video below). 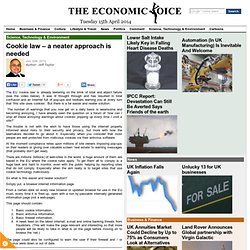 It was ill thought through and has resulted in total confusion and an internet full of pop-ups and toolbars warning you at every turn that ‘this site uses cookies’. But there is a far easier and neater solution. The number of warnings that you now get on a daily basis is wearisome and becoming annoying, I have already seen the question on a forum of ‘how can I stop all these annoying warnings about cookies popping up every time I visit a site?’ The trouble is not with the wish to have those using the internet properly informed about risks to their security and privacy, but more with how the lawmakers decided to go about it. Especially when you consider that most people are well protected from malicious cookies via their antivirus software. There are millions (billions) of web-sites in the world, a huge amount of them are based in the EU where the cookie rules apply.

Interesting? DLA Piper WIN - Data Protection Alert (EMEA) July 2012 update: How much has the cookie crumbled across the EU? 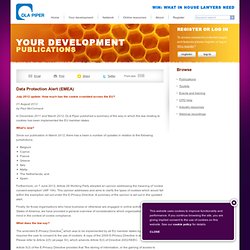 01 August 2012 by Paul McCormack In December 2011 and March 2012, DLA Piper published a summary of the way in which the law relating to cookies has been implemented the EU member states. What's new? Since our publication in March 2012, there has a been a number of updates in relation to the following jurisdictions: Belgium Cyprus France Greece Italy Malta The Netherlands, and Spain. Furthermore, on 7 June 2012, Article 29 Working Party adopted an opinion addressing the meaning of 'cookie consent exemption' (WP 194).

Finally, for those organisations who have business or otherwise are engaged in online activities in the United States of America, we have provided a general overview of considerations which organisations should bear in mind in the context of cookie compliance.