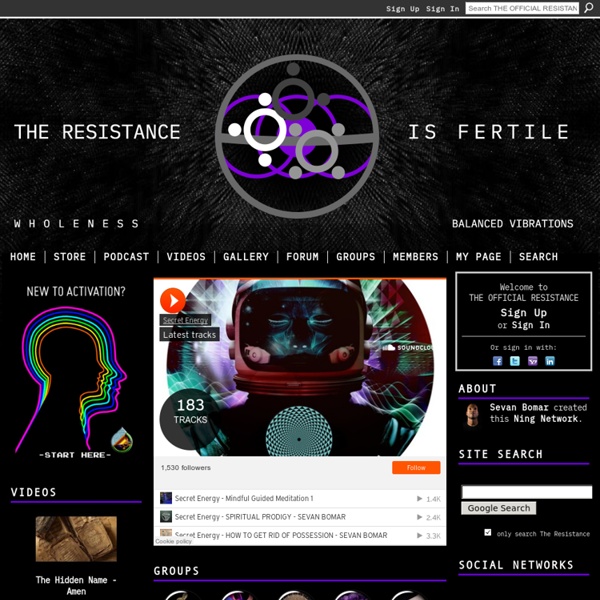 Facebook's 10-Year Plan To Become The Matrix In 10 years, Facebook would like anyone, anywhere, to be able to strap on a virtual reality headset and share moments with friends and family across the world. It’s the vision of a digital utopia that Facebook reps shared onstage during the annual F8 conference. Mark Zuckerberg himself pointed to a simple graph showing that we're sharing more and more complex experiences. The natural endpoint is virtual and augmented reality. If you look beyond the silly goggles for a moment, it’s a beautiful conceit about connecting humanity. Except for one thing: They don’t want to simply map Facebook on a world that already exists, adding share buttons to life events.

Information for Musicians 432 Hz - Wikileaks Sound and music consist of vibrations, the more vibrations per second, the higher the pitch. The unit for this is the Hertz, abbreviated Hz. 432 Hz is the natural "musical pitch" in the universe, as opposed to 440 Hz, which is the standard in the music nowadays in, for example, music albums and mp3 files. This musical pitch is the standard pitch of the diapason, which is the musical note A above the middle C, scientifically named A4. Most music worldwide has been tuned to 440 hertz since the International Standards Organization (ISO) endorsed it in 1953, following the prior recommendations of the Nazi party spoksman, Joseph Goebbels in 1939. Suffice to say, I will not waste good energy down the rabbit hole of conspiracy to expose another Illuminatti agenda, however I will quickly state that there was an organised effort to change Concert pitch to 440hz well back at the start of the last century to codify a New World Order of central pitch.

Has Doomsday begun already? Dr. Paul LaViolette's Galactic Super Wave Theory Although he does not inject himself in to the 2012 controversy, Dr. 10 Insanely Awesome Inspirational Manifestos There are certain messages that serve to get you “back to one” when you find you’re going off course. Whether you use tools such as a manifesto, a personal mission statement, a vision board or a list similar to Benjamin Franklin’s “13 Virtues”, taking the time to identify with one and then keeping it handy is worthwhile – and perhaps even imperative. But in a lot of cases you don’t have to “reinvent the wheel”; there are some awesome inspirational manifestos that have already put out there for you to look at and use as a means to set you back on course. Some come in the form of an image, some as a video, and some as nothing more than a blog post.

Esoteric Online - Document Library UPDATE 2/24/14: The Digital E-book and MP3 Library is currently being moved to a new server using Cloud technology, and will be a much more solid platform to be able to provide some great improvements. Some of these include: Cloud Technology - This means our Library is very scalable, beiing able to support millions of books on-demand User Account based - Members will now log in using their Esoteric Online credentials

Ancient Astrology and Divination on the Web Welcome to Ancient Astrology and Divination on the Web . This an organized, annotated set of more than 215 links to reliable information about ancient (primarily Greek and Roman) astrology and divination. It is designed to provide some alternative to web searches that turn up dozens of pages by astrologers, tarot readers, and palmists--most seeking your money and all "believers." Although moderns practitioners can occasionally provide useful information, they tend to misrepresent ancient evidence in favor of false continuity and simplicity. I should say at the outset that I am not a believer in astrology or any other form of divination. thought-waves thought-waves by Gabriel Levy I grew up by the shores of Lake Michigan. We used to play a game in the summer time. At the beach we would try to smash through the waves that crashed upon the shore.

Ancient Black Hole Speeds Through Sun's Galactic Neighborhood September 12, 2001 Contacts: Dave Finley, National Radio Astronomy Observatory (505) 835-7302 dfinley@nrao.edu How to Learn Without Memorizing Photo by Edwin Stemp Rote memorization is an inefficient way to learn. Just retaining a single formula can mean pounding the same information into your skull dozens of times. If your computer hard drive had this accuracy, you’d probably throw it out.

Math and Science Online Textbooks Aeronautics - Basics of Space Flight - Online Textbook From JPL Algebra - Online Textbook Anatomy - Neuroimaging of Human Brain Function - Online Textbook Celestial spheres Geocentric celestial spheres; Peter Apian's Cosmographia (Antwerp, 1539) In modern thought, the orbits of the planets are viewed as the paths of those planets through mostly empty space. Albert Van Helden has suggested that from about 1250 until the 17th century, virtually all educated Europeans were familiar with the Ptolemaic model of "nesting spheres and the cosmic dimensions derived from it".[6] Even following the adoption of Copernicus's heliocentric model of the universe, new versions of the celestial sphere model were introduced, with the planetary spheres following this sequence from the central Sun: Mercury, Venus, Earth-Moon, Mars, Jupiter and Saturn. History[edit] Early ideas of spheres and circles[edit] Following Anaximander, his pupil Anaximenes (c. 585–528/4) held that the stars, Sun, Moon, and planets are all made of fire.

Brainwave/Cymatic Frequency Listing This is a listing of frequencies that various parties have claimed can affect the human mind or body in some way. The following sorts of frequencies are included : Brainwave Frequencies - These are frequencies associated with various mental states. Using brainwave entrainment, you can coax your brainwaves to a certain frequency, and in doing so, achieve the mental state associated with that frequency. "Healing" Frequencies - These are frequencies that various parties claim could be used to heal illnesses of different kinds, or stimulate some region of the body (chakras).

The Cs Hit List 07: Sun Star Companion, Singing Stones and Smoking Visions I'm going to begin this installment of the Cs Hit List by picking up where we left off in the last one: the idea that our sun has a companion star. After publishing Cs Hit List 06 and reflecting on it some more, I realised that my argument for why our sun might have a companion star - simply that it's statistically probable - was kind of weak. There's actually more to it than that, even if such a companion has yet to be discovered. (Assuming it's there, of course, and that we would be told if it was actually discovered!). In fact, it's not a new idea.