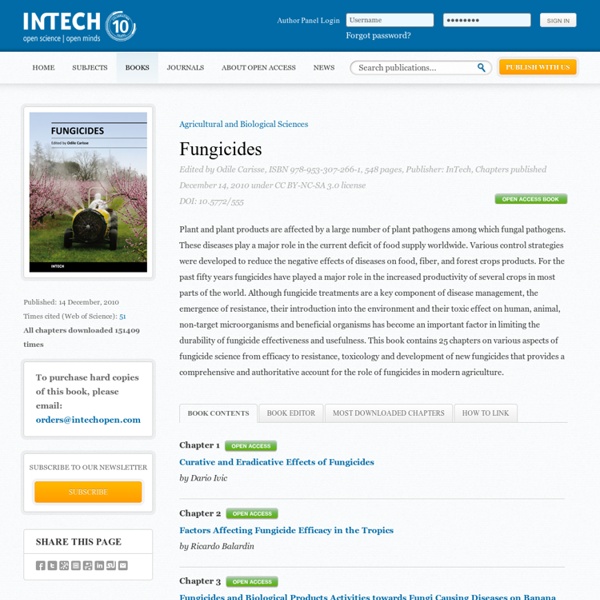 Edited by Odile Carisse, ISBN 978-953-307-266-1, 548 pages, Publisher: InTech, Chapters published December 14, 2010 under CC BY-NC-SA 3.0 licenseDOI: 10.5772/555 Plant and plant products are affected by a large number of plant pathogens among which fungal pathogens. These diseases play a major role in the current deficit of food supply worldwide.

PLOS 10/08/12 An Epidemiological Framework for Modelling Fungicide Dynamics and Control Defining appropriate policies for controlling the spread of fungal disease in agricultural landscapes requires appropriate theoretical models. Most existing models for the fungicidal control of plant diseases do not explicitly include the dynamics of the fungicide itself, nor do they consider the impact of infection occurring during the host growth phase. We introduce a modelling framework for fungicide application that allows us to consider how “explicit” modelling of fungicide dynamics affects the invasion and persistence of plant pathogens. Specifically, we show that “explicit” models exhibit bistability zones for values of the basic reproductive number ( ) less than one within which the invasion and persistence threshold depends on the initial infection levels. . . Figures Citation: Castle MD, Gilligan CA (2012) An Epidemiological Framework for Modelling Fungicide Dynamics and Control. Editor: Simon Gubbins, Institute for Animal Health, United Kingdom Copyright: © Castle, Gilligan. .

PLANT PATHOLOGY 04/08/18 Meta‐analysis of fungicide efficacy on soybean target spot and cost–benefit assessment Introduction Target spot, caused by Corynespora cassiicola, was first reported on soybean (Glycine max) in the United States in 1945 (Olive et al., 1945), and can now be found in most soybean‐growing countries. Since its first report in 1976 in Brazil (Almeida et al., 1976), target spot has been considered a disease of limited importance. However, due to the widespread adoption of no‐till cultivation practices, sowing of susceptible cultivars and a decreased sensitivity of the pathogen to commonly used fungicides (Xavier et al., 2013), this disease has now established itself as endemic in Brazilian soybean‐growing regions, Paraguay, Bolivia and northern Argentina (Ploper et al., 2013). The reddish‐brown leaf lesions, initially observed in the lower to middle part of the canopy, are round to irregular, varying from specks to mature spots of 1 cm or more in diameter (Snow & Berggren, 1989). Every year, technical reports are published summarizing the results from target spot UTFs. where ).

EVOLUTIONARY APPLICATIONS 07/08/17 Slow and temperature‐mediated pathogen adaptation to a nonspecific fungicide in agricultural ecosystem Antimicrobial resistance, the ability of pathogens to withstand the action of pesticides and antibiotic drugs, has recently been rated to have a disastrous impact on a wide array of natural and social issues such as public and animal health, food security, socioeconomic development, and ecological sustainability to an extent similar to those caused by global climate change (Gelband & Laxminarayan, 2015; Gould, 2010; Hiltunen, Virta, & Laine, 2017) such as increases in mean and fluctuation of world temperature (IPCC 2007). In addition to action modes and genetic characters of pathogen mutants in the action sites, many other genetic, environmental, and social factors can influence the population dynamics and evolution of antimicrobial resistance in pathogens. Fungicides are a group of antimicrobials widely used to manage fungal diseases in agricultural system. Evolution of fungicide resistance in pathogen populations greatly threatens food security and ecological sustainability. where