PATHOGENS 01/04/21 Pyrethroid Resistance Aggravation in Ugandan Malaria Vectors Is Reducing Bednet Efficacy. Monitoring cases of insecticide resistance aggravation and the effect on the efficacy of control tools is crucial for successful malaria control. 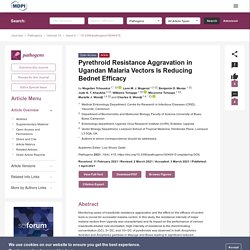 In this study, the resistance intensity of major malaria vectors from Uganda was characterised and its impact on the performance of various insecticide-treated nets elucidated. High intensity of resistance to the discriminating concentration (DC), 5× DC, and 10× DC of pyrethroids was observed in both Anopheles funestus and Anopheles gambiae in Mayuge and Busia leading to significant reduced performance of long-lasting insecticidal nets (LLINs) including the piperonyl butoxide (PBO)-based nets (Olyset Plus).

Molecular analysis revealed significant over-expression of cytochrome P450 genes (CYP9K1 and CYP6P9a/b). ►▼ Show Figures Figure 1 This is an open access article distributed under the Creative Commons Attribution License which permits unrestricted use, distribution, and reproduction in any medium, provided the original work is properly cited. BIORXIV 21/12/20 Variation in pyrethroid resistance phenotypes in Anopheles darlingi from residual malaria transmission area: warning on suspected resistance built-up in French Guiana. PLOS 10/11/20 A differential expression of pyrethroid resistance genes in the malaria vector Anopheles funestus across Uganda is associated with patterns of gene flow. 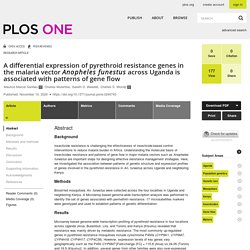 Understanding the molecular basis of insecticides resistance and patterns of gene flow in major malaria vectors such as Anopheles funestus are important steps for designing effective resistance management strategies. Here, we investigated the association between patterns of genetic structure and expression profiles of genes involved in the pyrethroid resistance in An. funestus across Uganda and neighboring Kenya. Methods Blood-fed mosquitoes An. funestus were collected across the four localities in Uganda and neighboring Kenya. Results. PLOS 05/12/18 Pyrethroids resistance intensity and resistance mechanisms in Anopheles gambiae from malaria vector surveillance sites in Nigeria. Abstract Anopheles gambiae, An. coluzzii and An. arabiensis are the three major vectors of malaria in Nigeria. 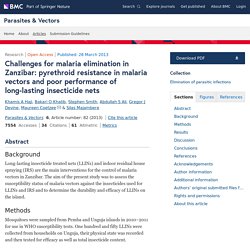 PNAS 20/11/12 Impact of pyrethroid resistance on operational malaria control in Malawi. The push for malaria elimination and eventual eradication will be heavily dependent on our ability to reduce disease transmission. 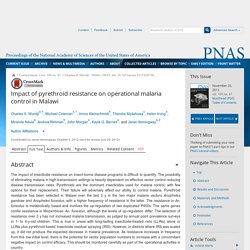 A recent editorial suggests that we have the tools to take on this challenge in African malaria heartlands (1). This is predicated on ensuring that vector control prevention and drug treatment tools are fully deployed, reaching every person at risk. There will need to be improved delivery of these tools and better clinical management of malaria cases. In highly endemic areas our ability to reduce malaria transmission will be dependent on vector control, before the focus can shift to killing the parasite in infected people.

Two forms of vector control, indoor residual spraying (IRS) and the distribution of long-lasting insecticide-treated nets (LLINs) have been demonstrated to reduce transmission when properly deployed against insecticide susceptible mosquito populations. PNAS 11/11/16 Restriction to gene flow is associated with changes in the molecular basis of pyrethroid resistance in the malaria vector Anopheles funestus. Abstract Resistance to pyrethroids, the sole insecticide class recommended for treating bed nets, threatens the control of major malaria vectors, including Anopheles funestus. 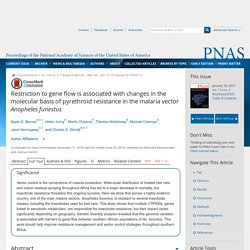 Effective management of resistance requires an understanding of the dynamics and mechanisms driving resistance. Here, using genome-wide transcription and genetic diversity analyses, we show that a shift in the molecular basis of pyrethroid resistance in southern African populations of this species is associated with a restricted gene flow. Across the most highly endemic and densely populated regions in Malawi, An. funestus is resistant to pyrethroids, carbamates, and organochlorides. Genome-wide microarray-based transcription analysis identified overexpression of cytochrome P450 genes as the main mechanism driving this resistance. Vector control, including indoor residual spraying (IRS) and long-lasting insecticide- treated bed nets (LLINs), is the primary control intervention to prevent malaria transmission. PLOS 16/12/15 Impact of Insecticide Resistance on the Effectiveness of Pyrethroid-Based Malaria Vectors Control Tools in Benin: Decreased Toxicity and Repellent Effect. 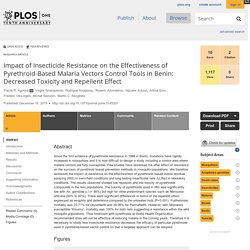 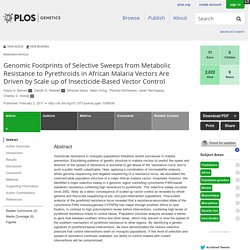 Elucidating patterns of genetic structure in malaria vectors to predict the speed and direction of the spread of resistance is essential to get ahead of the ‘resistance curve’ and to avert a public health catastrophe. Here, applying a combination of microsatellite analysis, whole genome sequencing and targeted sequencing of a resistance locus, we elucidated the continent-wide population structure of a major African malaria vector, Anopheles funestus. 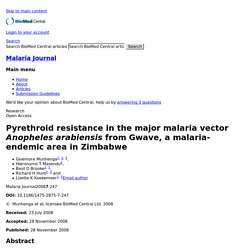 In Gokwe, members of the An. gambiae complex, predominantly An. arabiensis, have been implicated as the main vectors [4, 5]. This study confirms An. arabiensis as the main malaria vector in Gwave. Anopheles arabiensis predominated over all the other sibling species in wild collections and was the only species found to be infected with the malaria parasite P. falciparum. The low infectivity rate detailed here could be attributed to the timing of mosquito collections as malaria transmission peaks from mid February to late April in Zimbabwe [5]. The presence of An. longipalpis Type C in our collections, which we had morphologically mis-identified as An. funestus, highlights the need for molecular species identification, especially where malaria vectors occur in sympatry with closely related non-vectors. 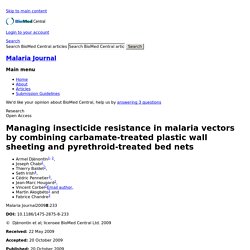 Results in the laboratory show good wash resistance of woven polypropylene (PPW) compared to other materials, which may be explained by the structure of this material. Some of the insecticide may be retained between the fibres and potentially protected over time from the abrasive effect of the washes. It is also possible that there was an interaction between bendiocarb and polypropylene. The use of soap significantly reduced the wash resistance of treated materials because the half-life of bendiocarb decreases in alkaline solution, and the pH of the soapy water was 9.7.

The use of binding resin improved the wash resistance of the treated materials. In the previous studies, carbamates were used on mosquito nets. MALARIA JOURNAL 02/05/13 High level of resistance in the mosquito Anopheles gambiae to pyrethroid insecticides and reduced susceptibility to bendiocarb in north-western Tanzania.

Anopheles gambiae s.s resistance to pyrethroids and DDT was widespread throughout the study area of Muleba district in north-western Tanzania. 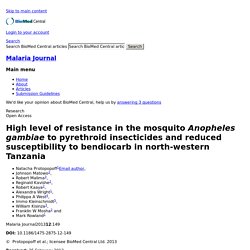 The frequency of the kdr east approached fixation in the An. gambiae s.s population but was absent in An. arabiensis. Emerging resistance to bendiocarb was observed for the first time. There was considerable variation in the density of mosquitoes between clusters. Greater densities of mosquitoes were to be found in the south-west. It was important to test samples of Anopheles from the north-east area to investigate resistance as a possible cause of the heterogeneity in Anopheles density between the two areas. The samples for testing were deliberately chosen from adult collections to represent natural age-structured populations. In the resistance tests with lambdacyhalothrin on mosquitoes that were identified by PCR, 23% of An. gambiae s.s and 100% of An. arabiensis were killed overall.

Malaria Journal 2013, 12:77 Effects of pyrethroid resistance on the cost effectiveness of a mass distribution of long-lasting insecticidal nets: a modelling study. Field data Recently, the effects of a deltamethrin and piperonyl butoxide (PBO) combination mosquito net, PermaNet 3.0 (P3), on blood feeding and mortality were studied in experimental hut studies [8, 9, 10, 11, 12] in seven locations in Africaa on eight different Anopheles gambiae sensu lato populations (populations 1–8 in Table 1). In another location in Vietnam, it was tested on Anopheles epiroticus[13] (population 9 in Table 1). The studies in these locations were of similar design, followed similar protocols, and assessed blood feeding and mortality of P3 versus standard LLINs containing a single insecticide.

P3 has a polyethylene roof incorporated with deltamethrin (at a target dose of 4 g/kg +/− 25%) and PBO at a target dose of 25 g/kg +/− 25%. The 75-denier polyester sides have a knitted 70 cm border region, coated with a wash-resistant binder and deltamethrin at a target dose of 2.8 g/kg +/− 25%. MALARIA JOURNAL 28/01/15 A cohort study of the effectiveness of insecticide-treated bed nets to prevent malaria in an area of moderate pyrethroid resistance, Malawi. Study area The study was conducted in the Traditional Authority of Sitola in Machinga District, surrounding the town of Liwonde (500 m above sea level; −15°3'S 35°14'E). The study area is bordered on the west by the Shire River and on the northeast by the Likwenu River and Liwonde National Park (Figure 1).

The population of the area is mostly of the Yao ethnic group, but both Chichewa and Chiyao are spoken. Annual rainfall is unimodal and approximately 1,000 mm falls between October and May, with daily temperature averaging 26°C in the rainy season and 21°C in the dry season. In this area, malaria transmission is intense and perennial, peaking during the rainy season. Study design and population. MALARIA JOURNAL - 2015 - Rapid evolution of pyrethroid resistance prevalence in Anopheles gambiae populations from the cities of Douala and Yaoundé (Cameroon) J Vect Borne Dis 44, September 2007, pp. 181–188 Dynamics of knockdown pyrethroid insecticide resistance alleles in a field population of Anopheles gambiae s.s. in southwestern Nigeria.

Lancet Infectious Diseases 17/08/11 Malaria morbidity and pyrethroid resistance after the introduction of insecticide-treated bednets and artemisinin-based combination therapies: a longitudinal study. PNAS 20/11/12 Impact of pyrethroid resistance on operational malaria control in Malawi. MALARIA JOURNAL 18/02/16 Status of insecticide resistance in high-risk malaria provinces in Afghanistan. Gathering bionomic information on endemic malaria vectors is an essential component for the development of an effective vector management plan. Previous entomological studies performed in Afghanistan have highlighted the diversity of Anopheles species present in the country [4, 5]. This study confirmed that An. stephensi and to a lesser extent An. culicifacies are the dominant species in the provinces located in the east (Nangarhar, Laghman and Kunar) and south (Ghazni) of the Hindu Kush mountain range. An. superpictus was the only species identified in the northern province of Badakhshan.