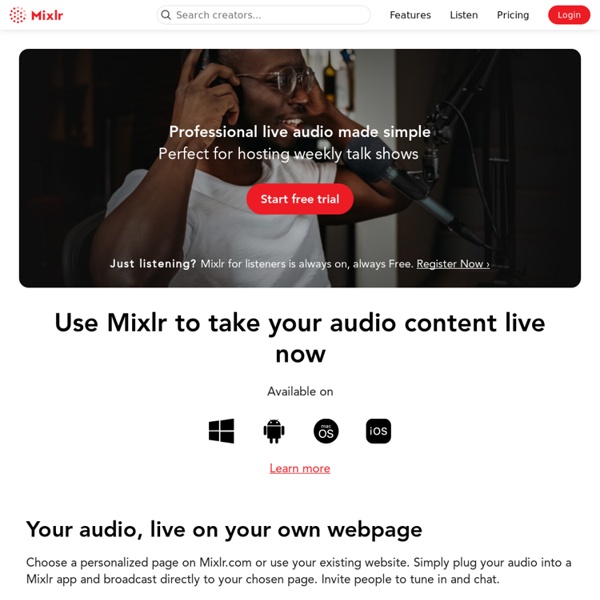 Top 10 Free Ways To Discover New Music Online Bored with your music and want to discover some new bands or singers? There are two main ways you can do that online. You can use services which create music maps, allowing you to explore artists similar in genre to the artists you already listen to. Or you can use music blogs and websites that showcase independent or up-and-coming artists, whether the music is being reviewed, or posted by the musicians themselves. Some of these websites have a community built around them, which gives fans the opportunity to interact directly with these new talents. Here is a list of 10 free sites to discover new music. Aviary Audio Editor Myna : une web app pour monter sa musique gratos Whoah! You broke something! Just kidding! You tried going to which doesn't exist, so that means I probably broke something. The following is a list of the latest posts from the blog. Maybe it will help you find what you're looking for.

The foobar2000 resource thread Introduction I know there a couple wiki's and tutorials around on how to configure foobar2000, but I haven't really seen a resource thread with a list of useful DSP's and plugins. So I thought, why not create one? GoodReader's text-to-speech lets you turn any PDF or TXT document into an audiobook GoodReader, the popular document reader app developed by Good.iWare, has just received another significant update. Within the past couple of months, GoodReader received a couple of updates that brought iOS 8 compatibility, iPhone 6 optimizations, iCloud Drive integration, Touch ID support, and more. Now, the latest update to GoodReader introduces more improvements, most notably a new Speak feature that effectively turns any PDF or TXT document into an audiobook. To enable this new feature, just press on a blank section of a supported document and tap the new Speak option, whereupon GoodReader automatically begins reading the document aloud. You can also set GoodReader to read a specific section of the document by highlighting the section and selecting the Speak command.

The Nerve Mixtape With Robert Schwartzman The former Rooney frontman and general Hollywood man about town gives us a romantic playlist for the ages. by Alex Heigl Robert Schwartzman is best known for being the frontman of uber-California band Rooney, and yes, Jason Schwartzman's brother. But he's also an accomplished actor and musician in his own right, and is currently promoting his second album, Double Capricorn, sales of which benefit the Tibetan Healing Fund. Pick up a copy, then enjoy this Spotify playlist of Robert's Mixtape. Online Drum Machine Drumbot is the next best thing to a real drummer. Full song loops and tons of grooves. Designed specifically for non-drummers for use as backing tracks during song composition. We've partnered with real drummers, (can you think of a better beat maker?) who've created entire songs, from intro to outro, then organized everything to help you discover that perfect groove.