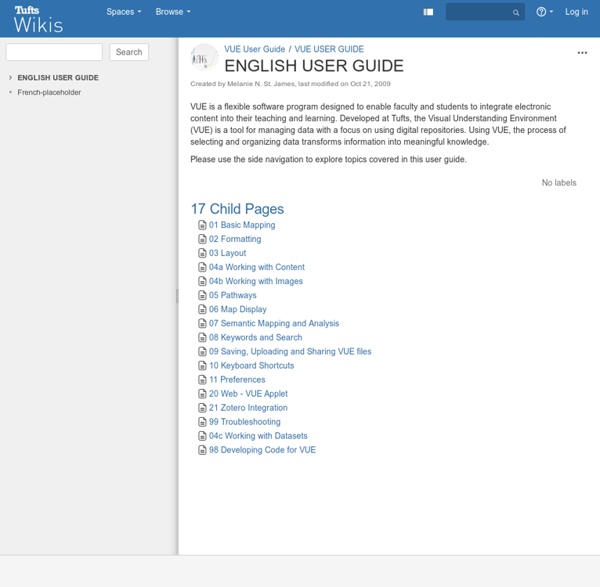 VUE is a flexible software program designed to enable faculty and students to integrate electronic content into their teaching and learning. Developed at Tufts, the Visual Understanding Environment (VUE) is a tool for managing data with a focus on using digital repositories. Using VUE, the process of selecting and organizing data transforms information into meaningful knowledge. Please use the side navigation to explore topics covered in this user guide.

03 Importing a matrix dataset Skip to end of metadataGo to start of metadata Importing a matrix dataset: In both cases whether you are importing a wide or tall version of your matrix data you will want to import the file in CSV format. Your data may require some cleaning for VUE to be able recognize the matrix, if you have questions about how your data needs to be formatted be sure to ask on the VUE User Forums. Select Windows > Datasets. 15 Effective Tools for Visual Knowledge Management Since I started my quest a few years ago searching for the ultimate knowledge management tool, I’ve discovered a number of interesting applications that help people efficiently organize information. There certainly is no shortage of solutions for this problem domain. Many tools exist that offer the ability to discover, save, organize, search, and retrieve information. However, I’ve noticed a trend in recent years, and some newer applications are focusing more on the visual representation and relationship of knowledge. I believe this is in part due to the wider adoption of mind mapping (and concept mapping), and leveraging concepts and advances in the semantic web community. Most traditional personal knowledge management (PKM) or personal information management (PIM) applications offer the same basic set of features:

Gallery Introduction At Except, we use VUE almost every day; because of its simplicity, we have found it to be the most useful tool available for quickly making system maps and causal loop diagrams. Click for full image Using VUE The two maps shown here are an example of how we use the program. They show simplified life cycle production chains. Ontologies Skip to end of metadataGo to start of metadata Ontologies are a list of related terms, both nodes (concepts) and links (relationships), which can be imported and added to a VUE map to provide semantic meaning. VUE can import ontologies defined in RDF-S or OWL formats allowing for the creation of concept maps from pre-defined object and relationship types. A defined mapping vocabulary scaffolds map creation and supports computer-assisted map comparison and assessment. The visual characteristics of objects and relationships defined in an ontology may also be styled via a CSS file (a default CSS file ships with VUE). Ontological terms are searchable.

01 Creating a New Map Skip to end of metadataGo to start of metadata Default New Map: When launching VUE, an empty VUE map is automatically created. A VUE map is a blank canvas onto which one can draw nodes and link them together, much like a traditional mind map or concept map. This section of the User Guide helps you get started. Creating Additional Maps:

04a Working with Content Skip to end of metadataGo to start of metadata VUE supports attached digital content from your computer, the Web and from remote systems such as FTP sites, digital repositories, and Google servers. Content can be added to the map as a node or attached to existing nodes. Once these resources are attached and integrated into individual nodes and links, the concept map becomes a content map. The VUE map becomes an extension of the Web and of digital repositories. visualizing.org: a New Shared and Free Resource on Data Visualization Visualizing [visualizing.org] has just been released as the latest online player in the ever-increasing blogosphere about the topic of data visualization. But Visualizing is different in many ways. For one, the man behind the Visualizing initiative is Adam Bly, founder and Editor-in-Chief of Seed and one of the people behind the impressive Design and the Elastic Mind exhibition at MoMA. Together with the fact that Visualizing is also supported by a wide range of highly reputable design institutions, the website positions itself as the most serious media player in the field of data visualization, enjoying an unseen amount of credibility and financial funding. While Visualizing.org's mission is to help make data visualization figure more prominently across the web as a way of understanding complex world issues as they unfold, it is not a weblog in the classic sense.

Christopher Baker Email became an integral part of my life in 1998. Like many people, I have archived all of my email with the hope of someday revisiting my past. I am interested in revealing the innumerable relationships between me, my schoolmates, work-mates, friends and family. This could not readily be accomplished by reading each of my 60,000 emails one-by-one. Instead, I created My Map, a relational map and alternative self portrait. 03 Creating Links Skip to end of metadataGo to start of metadata Once nodes have been created, the next step will be to create relationships between the nodes by linking them. Where nodes represent concepts or ideas, links represent relationships between the concepts. The process of linking the nodes adds organization to the map. Method 1: Toolbar From the toolbar, click the Link Tool.