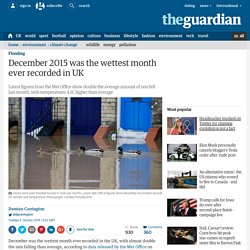 Last month saw widespread flooding which continued into the new year, with 21 flood alerts in England and Wales and four in Scotland in force on Tuesday morning. The record for the warmest December in the UK was also smashed last month, with an average temperature of 7.9C, 4.1C higher than the long-term average. Climate change has fundamentally changed the UK weather, said Prof Myles Allen, at the University of Oxford: “Normal weather, unchanged over generations, is a thing of the past. You are not meant to beat records by those margins and if you do so, just like in athletics, it is a sign something has changed.” The Met Office records stretch back to 1910 and, while December saw a record downpour particularly affecting the north of England, Scotland and Wales, 2015 overall was only the sixth wettest year on record. Hundreds flee homes as swaths of northern England submerged by floods. Hundreds of people fled their homes after torrential rain triggered flooding in towns across Lancashire and West Yorkshire, and dangerously high waters even reached the cities of Manchester and Leeds. 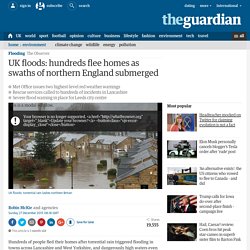 The Met Office issued two of its most serious, red weather warnings – indicating a danger to life – for the area and warned that up to five inches of rain could fall over the weekend. In addition, the Environment Agency (EA) issued 31 severe flood warnings – which also signal danger to life – as well as hundreds of standard flood warnings, which mean that immediate action is required. David Cameron was expected to chair a conference call of the government’s emergency Cobra committee on Sunday. “My thoughts are with people whose homes have been flooded,” he said in a statement. In Leeds a severe flood warning was put in place for the city centre, with the river Aire expected to reach a record peak on Saturday night. Atcha said he understood that the explosion had been caused by the flooding.

Winter 2015 floods: government response. Government departments, councils and the Environment Agency are working together to respond to the flooding during the winter of 2015 to 2016 across the North of England, and to help communities recover. 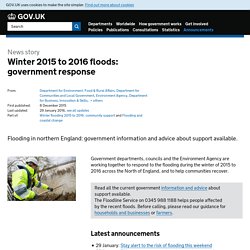 Latest announcements There’s a list of all relevant government announcements on GOV.UK. Check for flood warnings You should continue to check your flood risk and keep up to date by following @EnvAgency and #floodaware on Twitter. If you’re in Scotland please check the warnings on the Scottish Environment Protection Agency website. Government support for homes, businesses, farmers and councils In total the government’s investment in recovery from Storm Eva and Storm Desmond now amounts to nearly £200 million. Households and businesses The Floodline Service on 0345 988 1188 helps people affected by the recent floods. We are: Farmers The NFU has produced a newsletter for members affected by the flooding in the North East and North West. 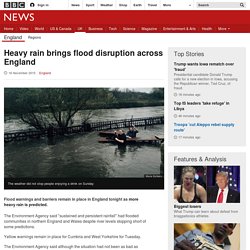 The Environment Agency said "sustained and persistent rainfall" had flooded communities in northern England and Wales despite river levels stopping short of some predictions. Yellow warnings remain in place for Cumbria and West Yorkshire for Tuesday. The Environment Agency said although the situation had not been as bad as predicted, people "should not relax". Rivers burst their banks in Cumbria, West Yorkshire and North Yorkshire on Sunday flooding roads, farmland and disrupting train services. Barriers were erected in Shrewsbury to prevent floodwater from the River Severn entering the town as river levels rose.

Only a handful of homes were affected, despite initial fears that 1,600 properties could be at risk. Martin Christmas of the Environment Agency said the flood defences had worked as they should. Image copyright PA Live flood warning map. UK floods: Extra soldiers sent to stricken areas.