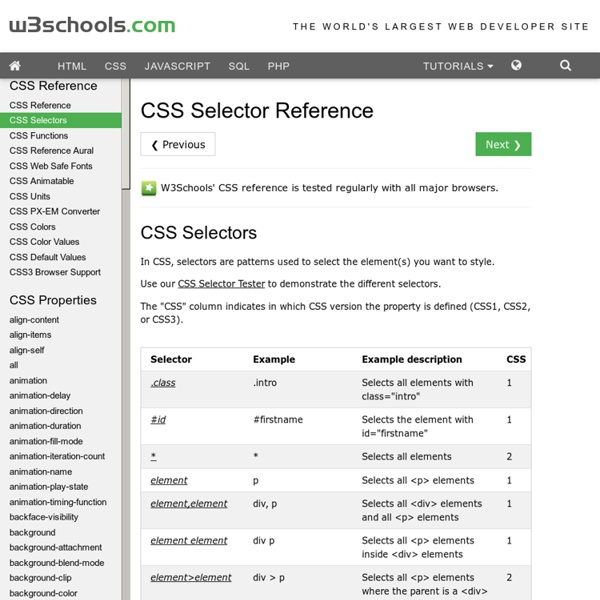 CSS Style Guides As we wrap up our recent poll on ordering CSS properties, it brings up the larger issue of CSS style guides. Ordering properties is just one choice you have to make that makes up a complete styling strategy. Naming is a part of it. Sectioning is a part of it. Commenting, indentation, overall file structure... it all makes up a complete CSS style guide. Let's round up some existing ones.

How nth-child Works There is a CSS selector, really a pseudo-selector, called nth-child. Here is an example of using it: What the above CSS does, is select every third list item inside unordered lists. That is, the 3rd, 6th, 9th, 12th, etc. But how does that work? And what other kinds of things can you do with nth-child? CSS media queries: width versus device-width width versus device-width In CSS media the difference between width and device-width can be a bit muddled, so lets expound on that a bit. device-width refers to the width of the device itself, in other words, the screen resolution of the device. Lets say your screen's resolution is 1440 x 900.

A Comprehensive Guide to CSS Resets This guide examines the infinite-like variety of CSS resets created by web developers and designers across the world. While almost all of these CSS resets are generally provided free for public use (many through Creative Commons licensing), it is incumbent upon you to check the terms of use before putting them to use in your projects. This guide follows Part 1, where the history of CSS resets was discussed; you’re advised to read that before this one to get the most out of this guide.

Selectutorial: CSS selectors Selectutorial - CSS selectors Selectutorial - CSS selectors Selectors are one of the most important aspects of CSS as they are used to "select" elements on an HTML page so that they can be styled. Find out more about selectors including the structure of rules, the document tree, types of selectors and their uses. Securing Communications with SSL and the .NET Compact Framework Netscape developed SSL in 1994 as a result of the growing concern about security on the Internet. SSL was later converted to a standard called Transport Layer Security (TLS). Devices running Windows Mobile Professional and Windows Mobile Standard support SSL version 2.0, SSL version 3.0, and SSL version 3.1. SSL version 3.1 is most commonly known as TLS version 1.0 (RFC 2246). The primary use of the technology was (and still is) to secure the communication between a browser and a Web server (by using HTTP), which also is the focus of this article, but this primary use has been combined with many other technologies for email messages (SMTP), file transfers (FTP), newsgroups (NNTP), and so on. Today, SSL is an accepted standard that is endorsed by the major credit card companies (such as Visa, MasterCard, and American Express) and many other leading financial institutions.

Responsive Data Tables In addition to the techniques below, see this roundup of additional explorations of this problem. Garrett Dimon: Data tables don't do so well with responsive design. Just sayin'.