The Hexayurt Project: Free Hardware housing for the world 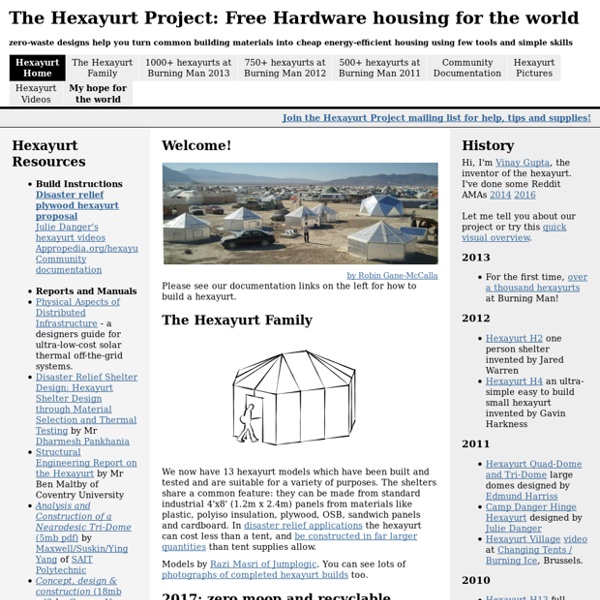 by Robin Gane-McCalla Welcome to the new Hexayurt Project homepage. Please see our documentation links on the left for how to build a hexayurt. We've also got tons of videos on the old homepage. One Network, One World Vinay Gupta, the inventor of the hexayurt, discusses the full context of the project at OHM2013, a European maker festival.

Three-Cornered Things Buckyballs are remarkable structures, and not just to mathematicians. In chemistry, a buckyball—more correctly, a spherical fullerene—is a molecule of carbon atoms forming a hollow spherical “shell.” Many sizes and configurations are possible (and stable!), but due to Carbon’s chemical properties they always have a few common characteristics: the faces are rings of 5 or 6 carbon atoms, and each carbon atom bonds to 3 others. The most commonly occurring one, buckminsterfullerene, is made with 60 carbon atoms in the shape of a soccer ball: CNC Panel Joinery Notebook I’ve been collecting clever ways of slotting flat stock together since I first read Nomadic Furniture back in 1999, well before the advent of the accessible hobby-class CNC tools that, today, make manufacturing parts like these pretty easy. Now, the world is full of people designing models, project enclosures, sculpture, furniture, and all kinds of other cool stuff to be assembled from parts made on laser cutters and CNC routers, and I keep expecting a definitive book or website to emerge that covers the “bag of tricks” in an organized way. So far, I haven’t found it. I may have missed it.

Superhead Rainwater Filter and First Flush Diverter The Superhead combines 4 important filtration functions into one simple device to automatically filter the rainwater entering your water tank. The 4 functions are: Rain Head to channel water from downpipes into the rainwater tank.First- Flush Diverter to automatically flush the first rain from washing pollution off your roof and into the tankLeaf screen to prevent leaves blocking pipes and entering the tankInsect Guard to prevent insects entering the tank What is a First- Flush Filter?

Three-Cornered Things Buckyballs are remarkable structures, and not just to mathematicians. In chemistry, a buckyball—more correctly, a spherical fullerene—is a molecule of carbon atoms forming a hollow spherical “shell.” Many sizes and configurations are possible (and stable!), but due to Carbon’s chemical properties they always have a few common characteristics: the faces are rings of 5 or 6 carbon atoms, and each carbon atom bonds to 3 others. The most commonly occurring one, buckminsterfullerene, is made with 60 carbon atoms in the shape of a soccer ball: Global Village Construction Set by Marcin Jakubowski Open Source Ecology is a network of farmers, engineers, and supporters building the Global Village Construction Set - a modular, DIY, low-cost, open source, high-performance platform that allows for the easy fabrication of the 50 different industrial machines that it takes to build a small, sustainable civilization with modern comforts. The aim of the GVCS is to lower the barriers to entry into farming, building, and manufacturing. Its a life-size lego set that can create entire economies, whether in rural Missouri, where the project was founded, or in the developing world. So Far we’ve prototyped 8 of the 50 Machines and we’ve been expanding rapidly. We are 100% crowd-funded.

warpplayer: QuickTime movie player with realtime warping and navigation Intended primarily for fulldome projection using a spherical mirror Also used as a navigable movie player Written by Paul Bourke, Ian Hooper, Evan Hallein Documentation by Paul Bourke Introduction "warpplayer" is a Mac OS-X application that takes a QuickTime movie and a description of how to distort each frame. The movie is played and distorted on the fly.

Digital Wood Joints Wood Joints are fascinating! They embellish old furniture and wood constructions of ancient Japanese temples alike. Everytime we come across them, we are filled with admiration: Admiration for the skill of the master craftsman, as their creator, but also admiration for the balance between function and beauty, which turns the furniture or temple into a work of art. With the onset of industrialisation, the traditional wood joints have been banned more and more to the background. Manufacturing has to be above all efficient, so there is no more room for traditional wood joints.

How I built my Geodesic Domes How to Build A Geodesic Dome Support this site Strength of a dome This picture is of a 3 frequency dome, roughly 16 feet in diameter, with four adults sitting on top of it. Hedgehog Self Build Hedgehog Self Build: Brighton UK The project began in 1996, when a small group of local people without permanent housing became aware of the recently completed Diggers Self Build Project in Brighton, itself an innovative ecological project in Brighton. The four people who initiated the project were all in housing need with little hope of being rehoused by Brighton council, and saw another self build project as a means of enabling them to literally build a future for their children. They used the contacts and structures as put together for the Diggers project to initiate this project with the council - and encountered a positive response. They then spent a good two years building up the group, lobbying councillors and publicising the initiative, and were eventually rewarded with the offer of a beautiful (tho' difficult to develop) site. The houses will be for rent at a discount from the standard Housing Association rate.

Cardboard Domes - Homepage: Constructing Cardboard Geodesic Domes That Will Survive Burning Man and the Black Rock Desert This site was designed in response to people asking us how we made our domes and who were interested in making their own. The design was borrowed from a 1973 edition of Popular Science and was improved upon to meet the rigors of the Black Rock Desert. These domes have served as an effective shelter against wind, extreme heat and, once painted, rainfall. The largest of the three domes in the picture opposite measures approximately 12' 7" in diameter and is about 6' 3" high at its center.

'The Pearl' dome house - passive solar design with a touch of high-tech Like its stablemate the Domespace house, David Fanchon's eco-friendly design is aimed at maximizing passive solar energy – though unlike the Domespace there's no rotating option. Dubbed "The Pearl," the standout features of the elegant domed structure are its integrated solar panels which can be adjusted to different angles to provide additional shade and optimize energy collection through the changing seasons. The pictures tell the story of the way in which The Pearl takes advantage of passive solar principles. Large south-facing (or north-facing if you reside below the equator) bay windows fitted with an automated venting system soak up the winter sun and allow light to enter every room, while the white steel roof reflects the sun in summer. The aerodynamic dome shape delivers protection from high winds and wild weather and the arch shape also provides resistance to earthquakes.

Increasing the number of available homes - Policies Issue For decades, there have not been enough homes to meet the needs of our growing and ageing population. From 2009 to 2010, only 115,000 new-builds were completed in England – fewer than any year in peace time since the 1920s and nearly a quarter of a million homes in England have stood empty for more than 6 months. The housing market is also one of the biggest casualties of the 2008 global credit crunch and the government’s priority has been to rectify a situation where lenders couldn’t lend, so builders couldn’t build and buyers couldn’t buy. Actions Custom Build In Laying the Foundations – a Housing Strategy for England, the Government announced that it would be making up to £30m of funding available to provide short-term project finance to help unlock group custom build – or self-build - schemes. This is separate from the funding available for community led housing under the Affordable Homes Programme. The aims of the Custom Build fund are two-fold: To stimulate the growth of the Custom Build Homes market by enabling more multi-unit custom build home projects and attract more commercial lenders and investors to this market, thereby increasing the number of custom built homes developed annually over the next decade. We have published a prospectus setting out details of how interested bidders may apply. Projects should be outside London.