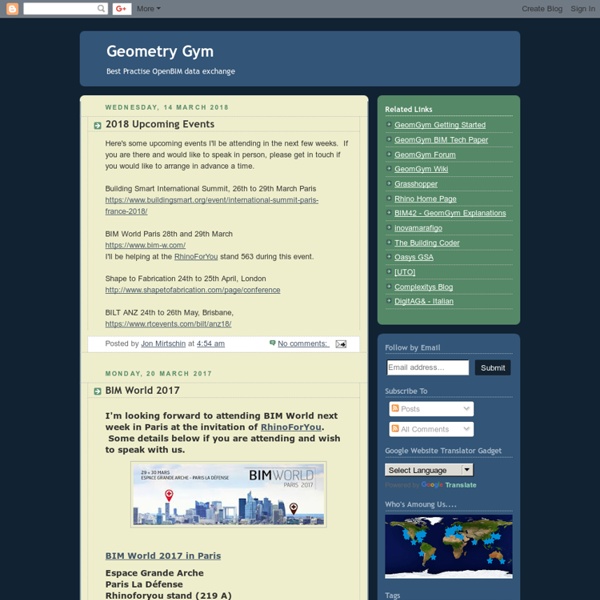 tobihaptik // #rhino #vray #grasshopper #architektur #fun #3d #books #architektur apps SSI - Structural Analysis Data to/from Rhino SSI (Smart Structural Interpreter) is the plug-in I've been developing that allows data to be transferred to and from Rhino from Structural Analysis programs used by Engineers to assess structural performance and strength. This is currently released for Oasys GSA (which is used at our office at Expedition), and early versions are being worked on for other similar programs. A lot of engineering time is spent on updating and altering structural analysis model geometry as projects and designs evolve and change. Particularly when different design disciplines coordinate and accomodate to find efficient solutions. You can watch this tutorial on this video link, then I'll explain the steps for you to try. Initial GSA model here. Initial Sofistik model here. Initial SpaceGASS model here. You can find the Rhino model with the a surface representing the desired shape here. Download both these files to your computer.

KARAMBA3D RHINO: GRASSHOPPER DEFINITIONS - RHINO / GH This definition was developed for my final thesis project to generate a louver system based on functional requirements within the building. The performance was then tested in Ecotect. A large part of my thesis design involved invertible arena seating with many moving parts. I used Grasshopper as a means to develop the seating testing clearances, site lines, and many other variables. This definition looks at taking any curved surface, and generating weaving geometry across it. The parametric skyscraper uses Grasshopper to generate the entire structure. My favorite definition to date, this definition generates box designs based on real boxes I crafted in the wood shop while in Grad school This definition extrudes geometry based on their proximity to a polyline attractor. Using a definition created by paramod, I wanted to see if I could edit the definition so that different panels could be combined to create a seamless surface This was one of the first definitions from scratch I ever created.

Oasys GSA GSA will analyse exactly what you tell it to, nothing more, nothing less. So if you input working loads (or SLS) then that is what will be processed. Assuming that you ran a linear analysis, you can then use the Combinations section to multiple the analysis results by the appropriate factor and add them to other analysis results. For example, if A1 was the analysis of the dead load L1 and A2 live load, then the combination would be 1.4A1 + 1.6A2, or similar if you are using Eurocodes. If your analyses are non-linear then you must not do this and you should instead include the multiplications and combinations within the analysis itself. The bridge load optimization analysis is slightly different in that it will work out the appropriate factors to apply at any location, and give you the characteristic, combination and frequent load values in accordance with EC1.