THE SEGAL METHOD. Walter_segal_buildings. Celebration of Walter Segal buildings Updated 10/09/2019 Segal Houses Open for public to view as part of 2019 London Open House Sorry now past - will be open in 2020 open house. 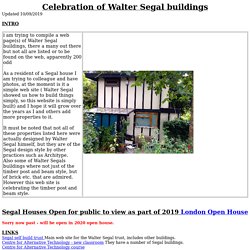 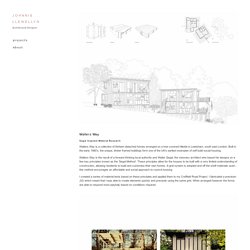 Built in the early 1980’s, the unique, timber framed buildings form one of the UK’s earliest examples of self build social housing. Walters Way is the result of a forward thinking local authority and Walter Segal, the visionary architect who based his designs on a few key principles known as the ‘Segal Method’.

These principles allow for the houses to be built with a very limited understanding of construction, allowing residents to build and customise their own homes. A grid system is adopted and off the shelf materials used - this method encourages an affordable and social approach to council housing. I created a series of material tests based on these principles and applied them to my Creffield Road Project. Japanese Wood Joint by Kenji0915. IKEA Lab Releases Open-Source Plans for DIY Spherical Garden. 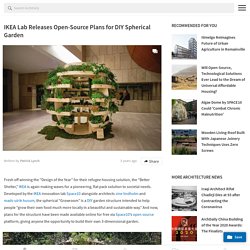 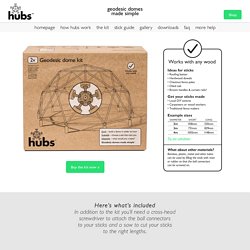 Once the ball connectors are attached to your sticks simply snap them into the hubs to start building. Ball connector Screws onto the ends of your sticks. The Futuristic Dwelling Machine that Could Have Been. Dymaxion Developments. Morphological Timeline of the Dymaxion Dwelling Machine 4D Dymaxion House (1927–1931) Buckminster Fuller’s first versions of the Dymaxion House were five-person family homes, with hexagonal floor plans and a central supporting mast. 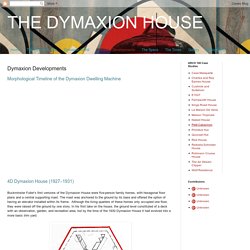 The mast was anchored to the ground by its base and offered the option of having an elevator installed within its frame. Although the living quarters of these homes only occupied one floor, they were raised off the ground by one story. In his first take on the house, the ground level constituted of a deck with an observation, garden, and recreation area, but by the time of the 1930 Dymaxion House it had evolved into a more basic trim yard. Forget Geodesic Domes, Buckminster Fuller's Dymaxion House Was His Masterpiece. In 1920, architect, inventor, and theorist Buckminster Fuller set his sights on designing a sustainable and inexpensive dwelling. 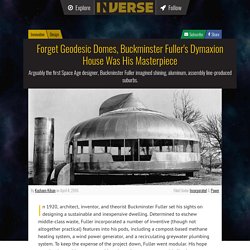 Determined to eschew middle-class waste, Fuller incorporated a number of inventive (though not altogether practical) features into his pods, including a compost-based methane heating system, a wind power generator, and a recirculating greywater plumbing system. To keep the expense of the project down, Fuller went modular. His hope was that he could create something altogether new: an assembly line home. The 1v Dome Calculator. Building your own dome (or tensegrity) Design and construct your own furniture with 3D printed joints. Design and construct your own furniture with 3D printed joints all images courtesy of ollé gellért world wide furniture company ikea already has everyone putting together their own bookcases, tables, beds, lights, but hungarian industrial designer ollé gellért, wants to take out the middle man, with a collection of 3D printed joints called ‘print to build’. the idea is not a moonshot, but a clear realization on where the furniture industry could be going in the future because of the steep price decline of 3D home printers. a sample bookcase built from the 3D printed joints no need for glue or screws during the construction process the different sets of joints made from durable plastic the 90 degree joint the 45 degree joint. 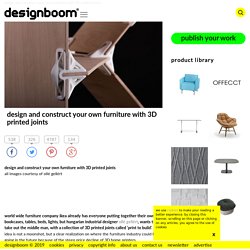 Japanese Wood Joint by Kenji0915. Competition: five Arckit 180 modelling sets to be won. Dezeen has teamed up with Arckit to give away five modelling kits from its new series. 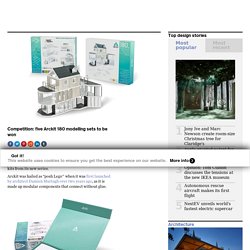 Arckit was hailed as "posh Lego" when it was first launched by architect Damien Murtagh over two years ago, as it is made up modular components that connect without glue. It aimed to provide architects with an alternative to the traditional cut and glue architectural working models, but the collection has since expanded to include kits suitable for a wider audience. Designs. Ibuku Bamboo Architecture and Design. Untitled. CFPR : Bureau Service. The Centre for Fine Print Research offer a bureau service in, Laser Cutting and 3D Printing. 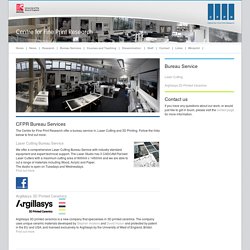 Contour Crafting - CC. Custom Build. In Laying the Foundations – a Housing Strategy for England, the Government announced that it would be making up to £30m of funding available to provide short-term project finance to help unlock group custom build – or self-build - schemes. 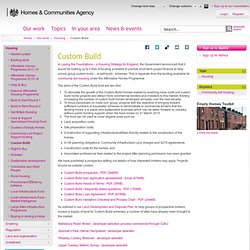 This is separate from the funding available for community led housing under the Affordable Homes Programme. The aims of the Custom Build fund are two-fold: To stimulate the growth of the Custom Build Homes market by enabling more multi-unit custom build home projects and attract more commercial lenders and investors to this market, thereby increasing the number of custom built homes developed annually over the next decade. We have published a prospectus setting out details of how interested bidders may apply. Projects should be outside London. Synopsis : If You Build It. Yurt. Smooth-Cast® 325 Colormatch® Product Information.

Screenings : If You Build It. Studio H « Project H. A "design/build" public school curriculum that sparks community development through real-world, built projects Studio H is an in-school design/build class for 8th-11th grade students. First launched in Bertie County, NC and now based at Realm Charter School in Berkeley, CA, Studio H students apply their core subject learning to design and build audacious and socially transformative projects. Students of Studio H have previously dreamed up, designed, and constructed a 2000-square-foot farmers market pavilion, a pop-up park, laser-etched skateboards, sculptural concrete public furniture, roadside farmstands, and more. Through experimentation, non-stop production, tinkering, and a lot of dirt under their fingernails, students develop the creative capital, critical thinking, and citizenship necessary for their own success and for the future of their communities.

(prefabricated accessible technological homes) offering a range of 34 models which allow one to design their own living space from the inside out. you can choose from various interior finishes and fixtures, from light fittings, floor finishes and bathroom tiles, to different façades and a range of roofing types to realize a truly customized home. first announced in october 2012, ‘starck with riko’ has now revealed renderings of the various housing typologies it will offer to the market. The Self Build Portal - The gateway to more custom built homes. Increasing the number of available homes - Policies.

Issue For decades, there have not been enough homes to meet the needs of our growing and ageing population. From 2009 to 2010, only 115,000 new-builds were completed in England – fewer than any year in peace time since the 1920s and nearly a quarter of a million homes in England have stood empty for more than 6 months. The housing market is also one of the biggest casualties of the 2008 global credit crunch and the government’s priority has been to rectify a situation where lenders couldn’t lend, so builders couldn’t build and buyers couldn’t buy. Actions The government wants builders, investors and local councils to increase the supply of both new-builds and repurposed empty homes.

Hedgehog Self Build. Hedgehog Self Build: Brighton UK The project began in 1996, when a small group of local people without permanent housing became aware of the recently completed Diggers Self Build Project in Brighton, itself an innovative ecological project in Brighton. The four people who initiated the project were all in housing need with little hope of being rehoused by Brighton council, and saw another self build project as a means of enabling them to literally build a future for their children. They used the contacts and structures as put together for the Diggers project to initiate this project with the council - and encountered a positive response. They then spent a good two years building up the group, lobbying councillors and publicising the initiative, and were eventually rewarded with the offer of a beautiful (tho' difficult to develop) site.

Digital Wood Joints. Wood Joints are fascinating! They embellish old furniture and wood constructions of ancient Japanese temples alike. Everytime we come across them, we are filled with admiration: Admiration for the skill of the master craftsman, as their creator, but also admiration for the balance between function and beauty, which turns the furniture or temple into a work of art. With the onset of industrialisation, the traditional wood joints have been banned more and more to the background. Manufacturing has to be above all efficient, so there is no more room for traditional wood joints.