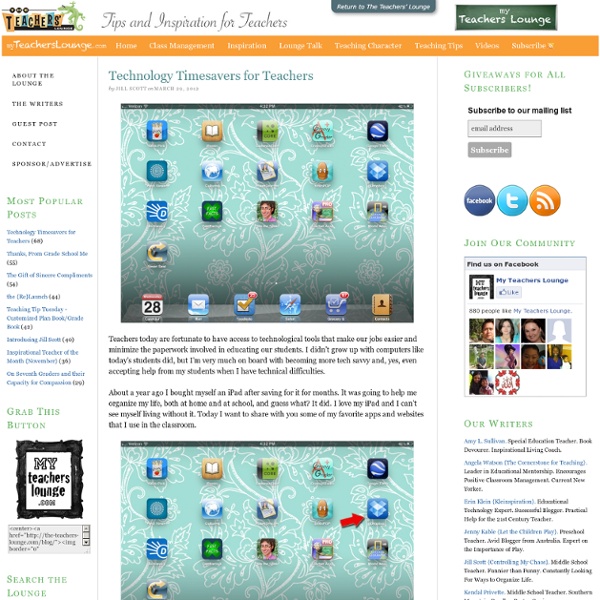 Teachers today are fortunate to have access to technological tools that make our jobs easier and minimize the paperwork involved in educating our students. I didn’t grow up with computers like today’s students did, but I’m very much on board with becoming more tech savvy and, yes, even accepting help from my students when I have technical difficulties. About a year ago I bought myself an iPad after saving for it for months. It was going to help me organize my life, both at home and at school, and guess what? It did. I love my iPad and I can’t see myself living without it. The first tool I use is DropBox and you don’t have to have an iPad to use it. DropBox is a way to store your documents “in the cloud” so that you have access to them wherever you are. I cannot tell you how liberating it was for me to kick my jump drive to the curb. I also don’t have the problem of having some files on my computer at home and some on my computer at school. Imagine! One app I use is Teacher Assistant.

Redefining Instruction With Technology: Five Essential Steps UserID: iCustID: IsLogged: false IsSiteLicense: false 10 Fun Tools To Easily Make Your Own Infographics People love to learn by examining visual representations of data. That’s been proven time and time again by the popularity of both infographics and Pinterest. So what if you could make your own infographics ? What would you make it of? It’s actually easier than you think… even if you have zero design skills whatsoever. Below are my two favorite infographic-making web 2.0 tools that I highly recommend. 15 Ways To Use The New iPad In Classrooms A Useful Twitter Cheat Sheet 3.97K Views 0 Likes Think you're supposed to actually type a full 140 characters for each tweet? Not quite.

Bloomin' Apps This page gathers all of the Bloomin' Apps projects in one place.Each image has clickable hotspots and includes suggestions for iPad, Android, Google and online tools and applications to support each of the levels of Bloom's Revised Taxonomy.I have created a page to allow you to share your favorite online tool, iOS, or Android app with others. Cogs of the Cognitive Processes I began to think about the triangular shape of Bloom's Taxonomy and realized I thought of it a bit differently.Since the cognitive processes are meant to be used when necessary, and any learner goes in and out of the each level as they acquire new content and turn it into knowledge, I created a different type of image that showcased my thoughts about Bloom's more meaningfully.Here is my visual which showcases the interlocking nature of the cognitive processes or, simply, the "Cogs of the Cognitive Processes". IPAD APPS TO SUPPORT BLOOM'S REVISED TAXONOMYassembled by Kathy Schrock​

7 Habits of Highly Effective Ed-Tech Leaders [#Infographic] Few business books will match the critical success of self-help guru Dr. Stephen Covey’s influential 7 Habits of Highly Effective People. Former President Bill Clinton was reportedly so enamored with the book that he invited Covey to Camp David to brainstorm how the author’s seven habits could be applied to his presidency. The book has gone on to sell more than 25 million copies. Covey died in 2012. 10 iPad tips every teacher should know Over the last couple of months I have just about switched from my trusty old laptop to the iPad as my primary work computer. Basically, the iPad does everything I could do on my PC and a great deal more through all of the apps available specifically for teaching. As a result of this, more of our staff are fronting up to work with iPads as they can also see the benefits in using a tablet for conferencing with students, checking email and using with their interactive white boards. The first questions I get from new users are generally "What can I do with it?" And "What apps should I have on it?" I think we have covered in detail more than once many of the great apps that are out their for education so today we are going to look at 10 tips are specifically useful for teachers who use an iPad.

50 Education Technology Tools Every Teacher Should Know About Technology and education are pretty intertwined these days and nearly every teacher has a few favorite tech tools that make doing his or her job and connecting with students a little bit easier and more fun for all involved. Yet as with anything related to technology, new tools are hitting the market constantly and older ones rising to prominence, broadening their scope, or just adding new features that make them better matches for education, which can make it hard to keep up with the newest and most useful tools even for the most tech-savvy teachers. Here, we’ve compiled a list of some of the tech tools, including some that are becoming increasingly popular and widely used, that should be part of any teacher’s tech tool arsenal this year, whether for their own personal use or as educational aids in the classroom. Social Learning These tools use the power of social media to help students learn and teachers connect.

It's the Pedagogy, Stupid: Lessons from an iPad Lending Program Recently, we were tasked with developing policies and procedures for an equipment lending program initiated within the Faculty Technology Resources Center at the University of Cincinnati. The program was conceived as a method for encouraging the use of technology in the classroom. By loaning equipment to faculty for an academic term, we would encourage them to evaluate—and hopefully innovate—the utility of various "cutting edge" technologies with no financial risks to themselves or their departments. Some colleges and universities are already providing all incoming students with iPads.

Search results for word wizard Background This is the first year of 1:1 iPads in my kindergarten classroom. In October 2010 I received one to use with my class of 26, and by the end of May 2011 I had 11 and my class had dropped down to 22 children. I absolutely loved that half the class could be working on the iPads completely independently, at various levels, while I worked with the other half of the kids. The ability level of the children in last years class was more varied than typical. The iPads were a life saver for me and allowed a greater level of differentiation than I could have done on my own- definitely to the benefit of the children.