Miles and miles and miles. It can be summer all year round now, as we buy fresh vegetables from Africa, potatoes from the Middle East or fruit from Latin America. 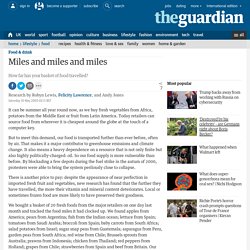 Today retailers can source food from wherever it is cheapest around the globe at the touch of a computer key. But to meet this demand, our food is transported further than ever before, often by air. That makes it a major contributor to greenhouse emissions and climate change. It also means a heavy dependence on a resource that is not only finite but also highly politically-charged: oil.

So our food supply is more vulnerable than before. What is food provenance? It's about knowing where your food came from. Fogponics: A New Spin on Aeroponic Gardens. Growing on Air: How Aeroponics Turns Less into More. Starting a garden indoors or out can require a whole laundry list of extras, not the least of which includes choosing the appropriate growing media, adding plenty of the right nutrients and managing the liberal but cautious application of water. 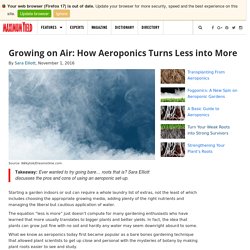 The equation “less is more” just doesn’t compute for many gardening enthusiasts who have learned that more usually translates to bigger plants and better yields. In fact, the idea that plants can grow just fine with no soil and hardly any water may seem downright absurd to some. What we know as aeroponics today first became popular as a bare bones gardening technique that allowed plant scientists to get up close and personal with the mysteries of botany by making plant roots easier to see and study. Soilless gardening of one type or another has been around for a long time.

The notion that plants could actually survive long-term with their roots swaying in the air came as a big surprise to early researchers, though. Food Ethics Council - Food poverty. This often results in people eating poor diets, which can lead to heart disease, obesity, diabetes and cancer, as well as inadequate levels of many vitamins and minerals. 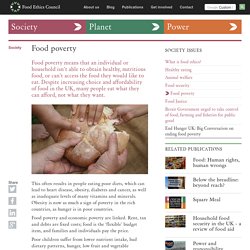 Obesity is now as much a sign of poverty in the rich countries, as hunger is in poor countries. Food poverty and economic poverty are linked. Rent, tax and debts are fixed costs; food is the ‘flexible’ budget item, and families and individuals pay the price. Poor children suffer from lower nutrient intake, bad dietary patterns, hunger, low fruit and vegetable consumption and problems accessing food in school holidays.

The Good Growth Plan – Syngenta. A life lived in tiny flats. The UK has some of the smallest new homes in Europe. 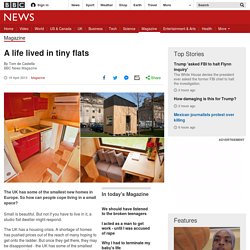 So how can people cope living in a small space? Small is beautiful. But not if you have to live in it, a studio flat dweller might respond. The UK has a housing crisis. Are tiny houses and micro-apartments the future of urban homes? With an eye on urbanization, population growth and efficiency, tiny spaces were a big theme at this summer’s Dwell on Design conference in Los Angeles. 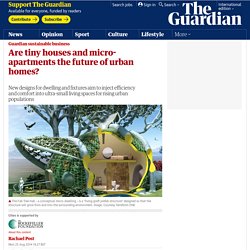 Designers from around the world showcased housing and products for living small – from transformable furniture and pre-fab trailers to 3D printed interior objects. Often their strategies sought to reduce the human footprint on the environment and save energy as well. Urban housing supplies are already straining worldwide with 54% of the global population of 7.2 billion living in cities, according to the United Nation’s World Urbanization Prospects 2014 report. 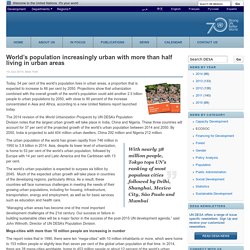 Projections show that urbanization combined with the overall growth of the world’s population could add another 2.5 billion people to urban populations by 2050, with close to 90 percent of the increase concentrated in Asia and Africa, according to a new United Nations report launched today. The 2014 revision of the World Urbanization Prospects by UN DESA’s Population Division notes that the largest urban growth will take place in India, China and Nigeria. These three countries will account for 37 per cent of the projected growth of the world’s urban population between 2014 and 2050. By 2050, India is projected to add 404 million urban dwellers, China 292 million and Nigeria 212 million. With nearly 38 million people, Tokyo tops UN’s ranking of most populous cities followed by Delhi, Shanghai, Mexico City, São Paulo and Mumbai. Denmark’s Food Waste Vigilante - BBC News. Miles and miles and miles. ACI_2014_Webinar_Guide-to-Formed-Concrete-Surfaces-sp. 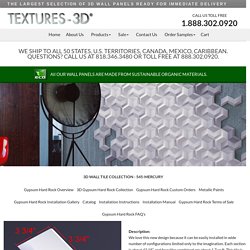 Each section is about 42.18″ and four tiles combined are about 1.7 sq ft. This tile is perfect for the do-it-yourself because it can be installed with any type of polyurthane adhesive like liquid nails and does not require the application of the seamless process. Better yet! On orders larger than 100 tiles we can pre-paint them in any specified color including our full range of Modern Masters water based metallic finishes. Textured Wall Treatments. Wall Texture Designs For The Living Room: Ideas & Inspiration. 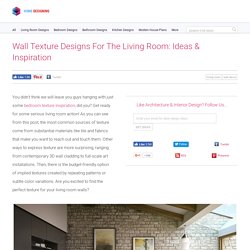 Follow Us... You didn't think we will leave you guys hanging with just some bedroom texture inspiration, did you? Get ready for some serious living room action! As you can see from this post, the most common sources of texture come from substantial materials like tile and fabrics that make you want to reach out and touch them. Other ways to express texture are more surprising, ranging from contemporary 3D wall cladding to full-scale art installations. MDF Bendy Board (Th)6mm (W)607mm (L)1220mm Pack 6. Stylish Japanese home gardening pod lets you grow vegetables indoors with little effort, no soil. No back yard? 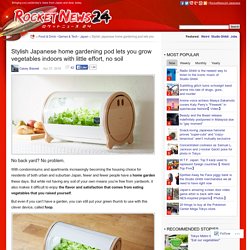 No problem. With condominiums and apartments increasingly becoming the housing choice for residents of both urban and suburban Japan, fewer and fewer people have a home garden these days. Aerogarden Heirloom Salad Greens Seed Pod Kit Lettuce Grow All Blend Pods Can. Place bid Review and confirm your bid Bid confirmation. 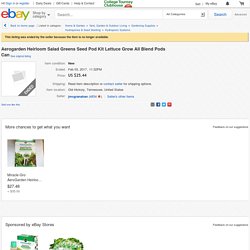 Untitled. How to Make the Perfect Salad: A Visual Guide. Try making your own salad today with help from our salad guide! Salad is a very subjective dish. Some love it, some hate it and some only eat it when they are going on a diet. Untitled. Untitled. Flower pot - Recent models - GrabCAD - CAD Library. News: Field Test on Wireless Charging of Electric Vehicles by Daimler and Conductix-Wampfler. The idea sounds as easy as convincing: Instead of „filling up“ an electric vehicle by cable the driver parks conveniently above the power source when using contactless inductive charging of the battery. The charging process starts automatically as soon as the car is parked over a charging point. Additional advantages come to the fore especially in public areas: The inductive charging points can be integrated into the ground safe from vandalism. Currently widespread inductive charging is still a long way off.

Everything You Need To Know About Wireless Charging - Pocketnow. Electricity has always been a thing of wonder, but like most technological advancements, it’s had its challenges and even a fight for what standard to adopt. Thomas Edison developed what would become the first commercially available electrical power transmission using direct current (DC).

One of the drawbacks of DC is its relatively limited range due to loss as distribution lines stretched further away from the power plants. Eventually power plants were created in neighborhoods and business districts to overcome the loss, but the plants were large, somewhat noisy, and generally undesirable in all but industrial areas. Nikola Tesla had a different idea for electricity, alternating current (AC), which allowed for much smaller power stations and simplified transmission over distances. Fast-forward to today. Untitled. Bubbler Air Stone vs Emitter. Mist Maker. Ultrasonic Mist Maker EU Plug Fogger Water Fountain Atomizer Air Humidifier 24V. Untitled. Nissan Leaf goes wireless: shows wireless charger in work. Nissan Leaf EV was a novelty and a revolution in the electric car industry when it was introduced last year.

In fact it's named the Car of the Year by many awarding organizations. Today, during the press days of the 2011 Tokyo Auto Show Nissan took the Leaf to the next level. On the sidelines of Tokyo Motor Show, Nissan unveiled a wireless charging system for the Leaf. This is a huge step removing one major question from a buyer's mind when considering purchasing an electric car. Untitled.

Untitled. Wireless Charging & How Inductive Chargers Work. Wireless Charging provides a convenient, safe, and reliable way to charge and power millions of electrical devices at home, in the workplace and in industry. By eliminating the use of physical connectors and cables, wireless charging provides a number of efficiency, cost and safety advantages over the traditional charging cable. From smartphones, to hand-held industrial devices and heavy-duty equipment applications, wireless power maintains safe, continuous, and reliable transfer of power to ensure all varieties of devices and equipment are charged and ready to go at a moment’s notice.