To Whom It May Concern...

Rhetological Fallacies. Maureen Johnson, This graphic is fabulous. It represents a tiny... No, you're not entitled to your opinion. Every year, I try to do at least two things with my students at least once. 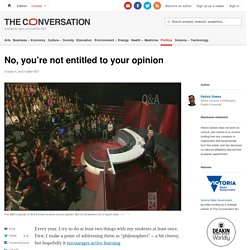 First, I make a point of addressing them as “philosophers” – a bit cheesy, but hopefully it encourages active learning. Secondly, I say something like this: “I’m sure you’ve heard the expression ‘everyone is entitled to their opinion.’ Perhaps you’ve even said it yourself, maybe to head off an argument or bring one to a close. Well, as soon as you walk into this room, it’s no longer true. You are not entitled to your opinion. A bit harsh? The problem with “I’m entitled to my opinion” is that, all too often, it’s used to shelter beliefs that should have been abandoned.

Firstly, what’s an opinion? Plato distinguished between opinion or common belief (doxa) and certain knowledge, and that’s still a workable distinction today: unlike “1+1=2” or “there are no square circles,” an opinion has a degree of subjectivity and uncertainty to it. You can’t really argue about the first kind of opinion. ‘He had the courage to day unpopular things’: No praise for courting controversy. By Guest Contributor Tami Winfrey Harris, cross-posted from What Tami Said This post is not about Christopher Hitchens. 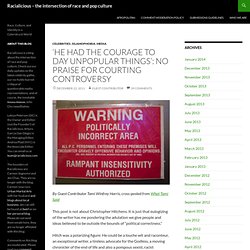 It is just that eulogizing of the writer has me pondering the adulation we give people and ideas believed to be outside the bounds of “political correctness.” Hitch was a polarizing figure: He could be a louche wit and raconteur, an exceptional writer, a tireless advocate for the Godless, a moving chronicler of the end of life and also a pompous sexist, racist warmonger and Islamophobe, drunk on privilege (and whatever else). I’ll remind that Hitchens was the guy who argued that women are inherently not funny, who attempted to paint Michelle Obama as a black militant on the strength of a college thesis about the alienation black students often feel on majority white campuses, and who said of the war in Iraq: “The death toll is not nearly high enough… too many [jihadists] have escaped.”

It is not a virtue simply to say controversial things. MORE TROLLS THAN A MID-LEVEL DUNGEONS AND DRAGONS CAMPAIGN. I have been the victim of trolling. 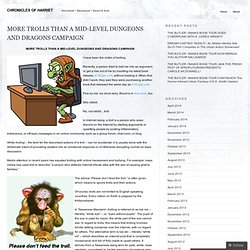 Recently, a person tried to bait me into an argument, or get a rise out of me by insulting my latest book release, A Single Link, without reading it. When that didn’t work, they said they were purchasing another book that released the same day as A Single Link. Fine by me; my short story, Brood is in that book, too. Silly rabbit. No, not rabbit…troll. In Internet slang, a troll is a person who sows discord on the Internet by starting arguments or upsetting people by posting inflammatory, extraneous, or off-topic messages in an online community, such as a group forum, chat room, or blog. While trolling – the term for the discordant actions of a troll – can be accidental, it is usually done with the deliberate intent of provoking readers into an emotional response or of otherwise disrupting normal on-topic discussion.

Media attention in recent years has equated trolling with online harassment and bullying. In Icelandic, þurs refers to trolls. Like this: Woven by Lidia Yuknavitch. Every story I have ever told has a kind of breach to it, I think. 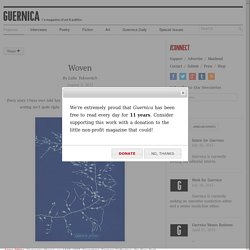 You could say that my writing isn’t quite right. That all the beginnings have endings in them. Here is Some Legitimate Science on Pregnancy and Rape. Trigger warning: discussion of violence against women and graphic mention of miscarriage. 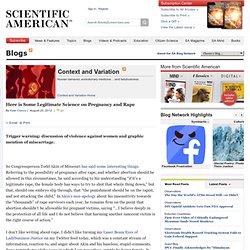 So Congressperson Todd Akin of Missouri has said some interesting things. Referring to the possibility of pregnancy after rape, and whether abortion should be allowed in this circumstance, he said according to his understanding “if it’s a legitimate rape, the female body has ways to try to shut that whole thing down,” but that, should one embryo slip through, that “the punishment should be on the rapist, and not attacking the child.” In Akin’s non-apology about his insensitivity towards the “thousands” of rape survivors each year, he remains firm on the point that abortion shouldn’t be allowable for pregnant victims, saying “…I believe deeply in the protection of all life and I do not believe that harming another innocent victim is the right course of action.”

I don’t like writing about rape. Some legitimate context Think of all the illnesses and conditions that make the news regularly. But. Bill Maher Isn’t the Only One Who Misunderstands Religion - NYTimes.com. BILL MAHER’s recent rant against Islam has set off a fierce debate about the problem of religious violence, particularly when it comes to Islam. 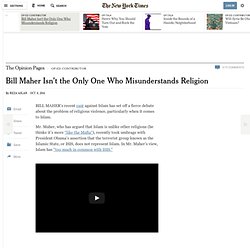 Mr. Maher, who has argued that Islam is unlike other religions (he thinks it’s more “like the Mafia”), recently took umbrage with President Obama’s assertion that the terrorist group known as the Islamic State, or ISIS, does not represent Islam. In Mr. Maher’s view, Islam has “too much in common with ISIS.” Continue reading the main story His comments have led to a flurry of responses, perhaps none so passionate as that of the actor Ben Affleck, who lambasted Mr.

Yet there is a real lack of sophistication on both sides of the argument when it comes to discussing religion and violence. On one hand, people of faith are far too eager to distance themselves from extremists in their community, often denying that religious violence has any religious motivation whatsoever. No religion exists in a vacuum. What does this mean, in practical terms?