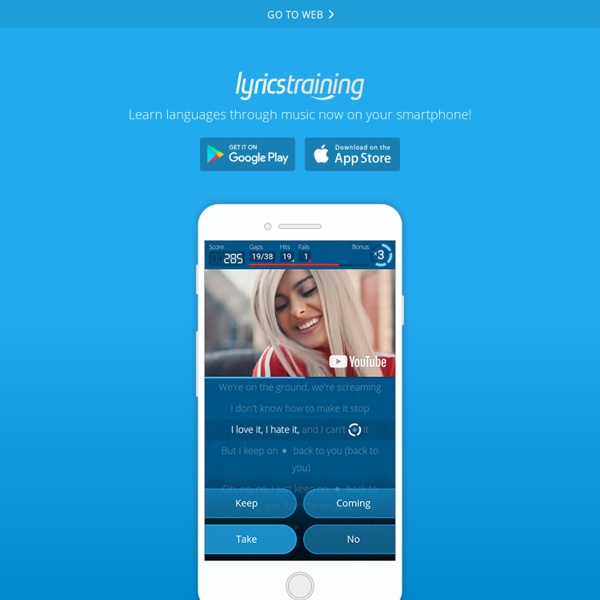 LENKA LYRICS - Everything At Once As sly as a fox, as strong as an ox As fast as a hare, as brave as a bear As free as a bird, as neat as a word As quiet as a mouse, as big as a house All I wanna be, all I wanna be, oh All I wanna be is everything As mean as a wolf, as sharp as a tooth As deep as a bite, as dark as the night As sweet as a song, as right as a wrong As long as a road, as ugly as a toad As pretty as a picture hanging from a fixture Strong like a family, strong as I wanna be Bright as day, as light as play As hard as nails, as grand as a whale

Gapminder – some teaching ideas Updated 4/2/07Gapminder is a BRILLIANT way to analyse development indicators. A range of development data can be plotted on a map or chart and animated over time. Gapminder website Here are some suggested activites to introduce the Gapminder site to students The Best Leaders Are Constant Learners As Juan Manuel Fangio exited the chicane before the blind Tabac corner in the 1950 Monaco Grand Prix, he stomped on the brake. It was a counterintuitive reaction for a racing driver exiting a corner — but one that likely saved his life. By slowing down he avoided plowing into a multi-car pile-up, which was just out of sight beyond the turn.

Spazio personale di mario aperto a tutti 24 ore su In the 1930s some novelists write a new kind of novel: the Anti-Utopian or Dystopian Novel. Among them we can mention Aldous Huxley with his Brave New World, George Orwell with his 1984 and the Russian Zamyantin with his novel We. Dystopian Novels are usually set in the future; they warn man to change his attitude to society. A Dystopia is the opposite of a Utopia: while a Utopia is a dream of a better future, a dream of a land of peace and brotherhood, in contrast to the corruption and tyranny of the contemporary political situation, a Dystopia is the dream of a future society which turns into the nightmare of a worse world than the present one. LIFE: George Orwell was the pen-name (pseudonym) of Eric Arthur Blair.

How many words do I need to learn? How many words do I need to learn?Home > Guide > Vocabulary > How many words? One of the most common questions I get asked is 'How many words do I need to learn?'. The answer is of course to learn any many as you can, but I can be more precise. The Best Music Websites For Learning English Check out my New York Times post for English Language Learners focuses on using music for language development and includes a student interactive, video, and teaching ideas. I use music a lot in my teaching of English Language Learners. I thought people might find it helpful to see which sites I believe to be the best out there to help teach English — Beginning, Intermediate, and Advanced — through music. My students have certainly found them helpful. Music is a familiar, fun, and engaging tool to use in learning a second language.

The Differentiator Try Respondo! → ← Back to Byrdseed.com What Google Learned From Its Quest to Build the Perfect Team So Rozovsky started looking for other groups she could join. A classmate mentioned that some students were putting together teams for ‘‘case competitions,’’ contests in which participants proposed solutions to real-world business problems that were evaluated by judges, who awarded trophies and cash. The competitions were voluntary, but the work wasn’t all that different from what Rozovsky did with her study group: conducting lots of research and financial analyses, writing reports and giving presentations. The members of her case-competition team had a variety of professional experiences: Army officer, researcher at a think tank, director of a health-education nonprofit organization and consultant to a refugee program. Despite their disparate backgrounds, however, everyone clicked. They emailed one another dumb jokes and usually spent the first 10 minutes of each meeting chatting.

1984 v. Brave New World In October of 1949, a few months after the release of George Orwell's dystopian masterpiece, Nineteen Eighty-Four, he received a fascinating letter from fellow author Aldous Huxley — a man who, 17 years previous, had seen his own nightmarish vision of society published, in the form of Brave New World. What begins as a letter of praise soon becomes a brief comparison of the two novels, and an explanation as to why Huxley believes his own, earlier work to be a more realistic prediction. Fantastic. Trivia: In 1917, long before he wrote this letter, Aldous Huxley briefly taught Orwell French at Eton. (Source: Letters of Aldous Huxley; Image: George Orwell (via) & Aldous Huxley (via).)

Klok Free Time Tracking and Klok Pro Time Tracking - Features Getting Started with Klok 2 New to Klok? No problem. Here's a quick guide of what you'll need to be productive with Klok. Create a Project...or two Before you can track your time you will need to add some projects to track time against.