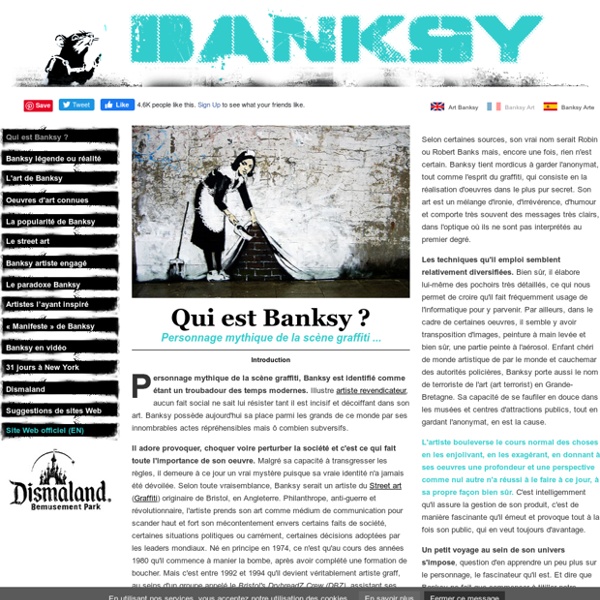 Art ArtFoodHistory The Wines of Gala: Salvador Dalí’s Surrealist Wine Guide Republished for the First Time in 40 Years Last published in 1978, The Wines of Gala is Salvador Dalí’s eccentric guide to wine grapes and their origin. Filled with over 140 appropriated artworks and collages collected and created by Dalí, the book is an equally surreal follow-up to TASCHEN’s reprinting of the artist’s cookbook Les Diners de Gala. In addition to Jean-François Millet’s The Angelus, which was a constant point of reference in Dali’s works, visuals include a Bacchus-like kitten, and a sort of tableau vivant featuring Dali himself.

JR Projects Since 2014 Since 2011 Since 2008 Since 2009 28 Millimeters 2008 - 2010 28 Millimeters 2007 28 Millimeters 2004 - 2006 2001 - 2004 Since 2009 Mark Jenkins // Street Installations Besançon Rome Rio de Janeiro Tudela London Dublin Cyrus Kabiru - Zeitz MOCAA Cyrus Kabiru was born in Nairobi, Kenya, where he currently lives and works. His intricate sculptural works push the boundaries of conventional craftsmanship, sculpture, photography, design and fashion. Kabiru makes reference to both his home in Kenya and to international countries and cities that he travels to. Kabiru’s practice, which has changed in recent years, includes large scale sculptures, installation and documentary films.

Ballerinas take over the Big Apple by Dane Shitagi & Chicquero Dane Shitagi is a NYC based photographer. Originally from Honolulu, he followed his instincts to live the photographic life. Taking inspiration from the sights and sounds of “the city” as well as the energy and diverse arts, Dane has formed a unique and heartfelt body of work that is sooo beautiful and personal. Rather than molding his ideas to the studio set, he has taken his creativity and inspiration from the world outside – preferring the rawness and atmosphere that only a living city like the Big Apple can bring. We loved this project of shooting ballerinas from the New York City Ballet all over the city with a delicate and soft vibe combined to the streets, traffic, landscapes, city sights of NYC as a background! Sweet!

1983, Kam Tin Main Road: Containers as Evidence of Presence 以容器作存在的證據 Containers as Evidence of Presence, 2010-now Adhesive photos collage on layers of glass Every object cannot exist on its own in the state of flow and permanency. Books are stored on shelves; wine is poured into bottles; water need to rely on coast to create river; even though air such invisible element, we have the Earth as the storage.

Man on wire: The story of Philippe Petit Standing alongside Yung Rizzle last night, faced with the question of what to watch, Russ’ recommendation of Man On Wire came to mind. Not to be confused with Denzel Washington’s 2004 action drama Man on Fire , Man on Wire tells the tale of Philippe Petit, a French high-rope artist whom in 1974 gained global notoriety for walking across the Twin Towers of the World Trade Center on a wire. Having seen the towers in a magazine six years before, walking the across quickly became Petit’s dream and obsession. Studying nearly every facet of the towers, Petit built a team of supporters to help him infiltrate, scale and walk the towers.

1983, Kam Tin Main Road: Compound Eyes 複眼 Compound Eyes, 2012-now Transparent adhesive BW-print collage on glass Under marketization and industrialization, cities were duplicated. A bee occasionally came across and saw the countless passersby; aside the shadows of men, vehicles were like ants; behind endless car queues, skyscrapers were as packed as dense forest. In eyes of insects, this world is not belonged to humans all along. Impermanent Sand Paintings by Andres Amador San Francisco-area landscape artist Andreas Amador etches massive sand drawings onto beaches during full moons when his canvas reaches its largest potential. Using only a rake and often several helpers the geometric and organic shapes are slowly carved into the sand, often interacting with the physical topography like the stones in a zen garden. The works exist for only a few moments, just long enough to snap a few photographs before being completely engulfed by the encroaching tide.