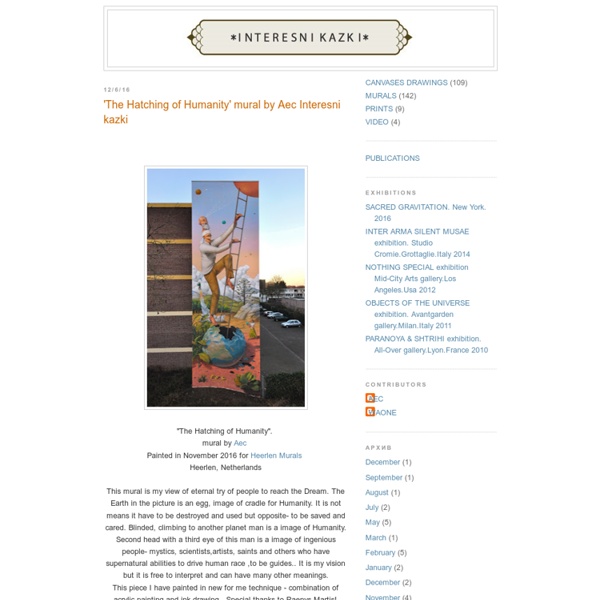 streetagainst Visionary Art By Alex Grey. The artist's mission is to make the soul perceptible. Our scientific, materialist culture trains us to develop the eyes of outer perception. Visionary art encourages the development of our inner sight. To find the visionary realm, we use the intuitive inner eye: The eye of contemplation; the eye of the soul. The visionary realm embraces the entire spectrum of imaginal spaces – from heaven to hell, from the infinitude of forms to formless voids. Every sacred art tradition begins with the visionary. The Role of Art Our inner world – the life of our imagination with its intense feelings, fears, and loves – guides our intentions and actions in the world. The artist attempts to make inner truths visible, audible, or sensible in some way, by manifesting them in the external, material world (through drawing, painting, song, etc.). Every work of art embodies the vision of its creator and simultaneously reveals a facet of the collective mind. The Visionary Tradition

Brooklyn Street Art - ...loves you more every day. : Brooklyn Street Art Posted on April 7, 2014 “After photographing in the mosh pits for awhile I began to get familiar with patterns in the music. Eventually it got to the point where I could sense the moment coming when things would really cut loose and go berserk,” says painter Dan Witz about his process and method for catching the moment when the roiling mass of hardcore music fans hit the perfect state of frenzy. “NY Hardcore Paintings”, opening this past Saturday night and on view currently at The Jonathan Levine gallery in Chelsea, presents Witz with his new body of convulsing bodies and to say they are a revelation is only part of the story. When we saw his first mosh pit paintings a few years ago we were struck by the raw thrilling chaotic energy and calculated abandon in them – and reminded of many such nights in the 80s and 90s in lower Manhattan when we also joined in the fray. Dan Witz “NY Hardcore” Jonathan LeVine Gallery (Photo © Jaime Rojo) Dan Witz “NY Hardcore” Jonathan LeVine Gallery. Swoon.

THE STREET ART BLOG Psychedelic art From The Art and Popular Culture Encyclopedia Psychedelic art is art inspired by the psychedelic experience induced by drugs such as LSD, Mescaline, and Psilocybin. The word "psychedelic" (coined by British psychologist Humphrey Osmond) means "mind manifesting". Features of psychedelic art Fantastic, metaphysical and surrealistic subject matter Kaleidoscopic, fractal or paisley patterns Bright and/or highly contrasting colors Extreme depth of detail or stylization of detail. Origins Psychedelic Art is informed by the notion that altered states of consciousness produced by psychedelic drugs are a source of artistic inspiration. The early examples of "Psychedelic Art" are literary rather than visual, although there are some examples in the Surrealist art movement, such as Remedios Varo and Andre Masson. Aldous Huxley's "The Doors of Perception" (1954), and "Heaven and Hell" (1956), remain definitive statements on the psychedelic experience. Psychedelic Art in 1960s Counterculture See also