Teaching Kids with iPads – Part 1 of 5 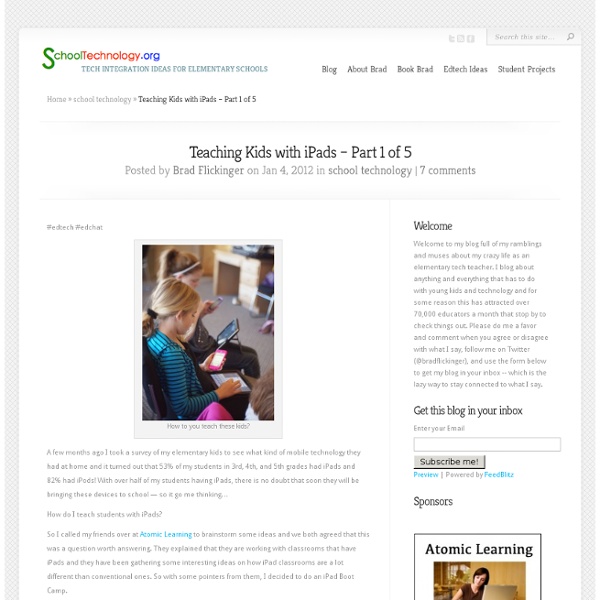 #edtech #edchat How to you teach these kids? A few months ago I took a survey of my elementary kids to see what kind of mobile technology they had at home and it turned out that 53% of my students in 3rd, 4th, and 5th grades had iPads and 82% had iPods! With over half of my students having iPads, there is no doubt that soon they will be bringing these devices to school — so it go me thinking… How do I teach students with iPads? So I called my friends over at Atomic Learning to brainstorm some ideas and we both agreed that this was a question worth answering. Planning iPad Projects: The first thing I did to get ready for my iPad Boot Camp was to start designing iPad projects, projects that were designed with a focus on Bloom’s Digital Taxonomy and the principles of UbD. Day One of iPad Boot Camp: So after two months of project planning, I started the iPad Boot Camp this past Monday with 10 students in the 3rd, 4th, and 5th grades to see how to teach students with iPads.

layout - Algorithm to implement a word cloud like Wordle Web Sites for the Little Ones: K-2 Web Sites for the Smaller Ones Pre K-2 ABCs - Take a tour through the alphabet Alfy - There's so many things for young children to do here. Alphabet Action - Click a letter to see a letter and hear its name. Animal Printouts - Print out pictures of animals to color. Animals - From the First Grade Backpack Apple Corps - Design your own "Apple Face". Arithmetic Activities - From the First Grade Backpack. Arthur Online - Everything "Arthur" here! Awesome Kids - Online stories Bear Time - Includes the adventures of John and El, songs, poems, games, coloring pages, and much more! Bedtime Stories for Busy Parents Billy Bear's Playground - Fun! Blue Dog Can Count - Fill in the boxes and Blue Dog will bark the answer. Bry-Back Manor - A lot of educational "fun stuff" at this site. Candlelight Stories Carlos' Coloring Book - Pick a picture and start some online coloring....E-mail your picture to a friend. Children's Storybook Online - Online stories Cool Sites - From First Grade Backpack Dr. Mr.

Avería – The Average Font Teaching in the Digital Age-Book Study Blog Party I was initially disappointed when I saw that the book chosen for the book study blog party that several bloggers that I follow are participating in is titled Teaching in the Digital Age. I feel pretty strongly that digital tools do not belong in my 1/2 day preschool program. However, I was intrigued because Dr. Jean was involved. I have just read the introduction and first chapter of the book and it looks like the book will help teachers use technology both for assessment and as a teaching tool. I understand that technology does not refer only to computers and ipads but also to digital cameras, audio recorders, webcams, projectors and smart boards. I do think that technology can enhance teaching for older students in a full day program when it is used judiciously. Why I don't think digital tools belong in a Preschool program. My preschool starts at 9:00 with the children going right to the outdoor playground. Technology as a communication tool.

Data Visualization Data Visualization is a method of presenting information in a graphical form. Good data visualization should appear as if it is a work of art. This intrigues the viewer and draws them in so that they can further investigate the data and info that the graphic represents. In this post there are 15 stunning examples of Data Visualization that are true works of art. Click on the title or image for a larger view of each visualization. The Strengths of Nations Here’s an image that discusses the variations in how different nations pursue science. Madrid.Citymurmur CityMurmur tries to understand and visualize how media attention reshapes the urban space and city. Genome Jules & Jim This visual represents the relationship between characters in the movie Jules & Jim. One Week of the Guardian This is one day in a series that takes the news from one week of the Guardian newspaper, and visually represents it as a series of static visualisations. One Week of the Guardian Leisure & Poverty Stock Data Related Posts

iPads in the Preschool Classroom Today I’m hosting Chapter 8 of Teaching in the Digital Age for our Summer Book Study. I was glad to see that Puerling did not talk about game-style apps for kids because those are not my favorite for the classroom. I think children get enough of that at home. I’ve read on other blogs or forums where teachers say it’s wrong to use iPads in a preschool classroom. Puerling discussed ways to introduce the iPad to young children. The main points from the chapter are in bold along with a few ideas I thought of while reading. Facilitate conversation while observing photos. Using photos with children was discussed in chapter 2, and the iPad is one way to share photos with children without the cost of printing them. Leafsnap HD is an app that could be used in the classroom or outdoors to identify leaves. If you frequently use video on the iPad, but would like to get still shots, I highly recommend an app called Video 2 Photo, which gives you each frame of the video. Engage with literature.

5 Circle Quilt Patterns to Try Whether you choose appliqué or pieced circles for your quilting projects, you’ll feel a great sense of accomplishment after quilting circles! Inevitably, your non-quilting friends will ask, “How did you do that?” Raw-edge appliquéd quilt: One of the simplest forms of circle quilts is a raw-edge appliqué design, which washes up with a softly frayed edge. Once each bulls-eye pattern is raw-edge appliquéd to the base fabric, each block is cut into quadrants and reassembled. Repurposed baby’s mini quilt: If you’ve fallen in love with the ease of raw-edge appliqué, you might like this Circle Appliqué Baby’s Mini Quilt from Stephanie at Eden & Eliot. Appliquéd dot quilt: The Circle Quilt by Holly at Bijou Lovely is an appliqué quilt pattern that calls for a circle cutting template to make perfect colored dots. Though this quilt requires a lot of steps, the project is relatively easy to make with Holly’s detailed tutorial. Curvy pinwheels quilt: