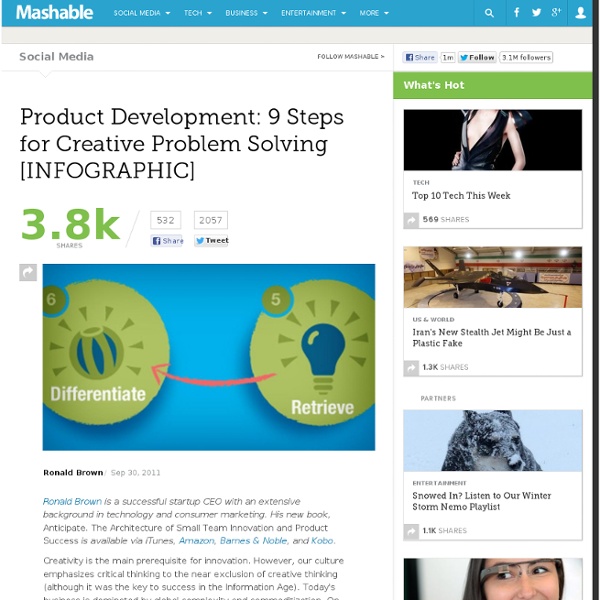 Ronald Brown is a successful startup CEO with an extensive background in technology and consumer marketing. His new book, Anticipate. The Architecture of Small Team Innovation and Product Success is available via iTunes, Amazon, Barnes & Noble, and Kobo. Creativity is the main prerequisite for innovation. However, our culture emphasizes critical thinking to the near exclusion of creative thinking (although it was the key to success in the Information Age). What constitutes creative thinking? In business, the process of generating and commercializing a good idea has been honed by creative industries for more than a hundred years.

Idolize Bill Gates, Not Steve Jobs - Maxwell Wessel by Maxwell Wessel | 12:29 PM November 1, 2011 Apple is undoubtedly the gold standard of today’s tech world. In fact, it’s probably the gold standard of American industry at the moment. Its innovative design, user interface, and ecosystem make it a titan in any category it enters. And it’s clear that Steve Jobs was the reason Apple rose to its current heights from the brink of bankruptcy. Both Jobs and Gates had immeasurable impacts on the world. But at the end of his life, Steve Jobs worried about Apple, Inc. Bill Gates stepped away from Microsoft in 2006 and, despite the company’s growing troubles in the face of the mobile disruption, has devoted his genius to solving the world’s biggest problems, despite the fact that solving those problems doesn’t create profit or fame.* Gates committed his talents to eliminating diseases, increasing development standards, and generally fighting inequality. Gandhi famously said, “Be the change you want to see in the world.”

The Web & Business Tools Startups Use Most [INFOGRAPHIC] Putting the likes of the super-funded aside (Color, anyone?), most early-stage startups operate on tight budgets and spend their dollars sparingly. A bevy of web services have made start-up costs all the more affordable, but now there's the conundrum of nearly too much choice. The folks at BestVendor surveyed 550 startup staffers — most in marketing and executive administration positions — on their favorite tools for email, accounting, web analytics, CRM, productivity, design, storage, payment processing, operations and so forth. Their answers, in aggregate, speak to the growing trend in startups moving toward predominately cloud-based operations. So what's hot among startups these days? Check out the infographic below for even more insight on the web and business services that today's startups are selecting en masse.

Tilt Gives You 3D Visualization of a Webpage Tilt represents a new way of visualizing a web page. This tool creates a 3D representation of the document, with the purpose of displaying, understanding and easily analyzing the DOM. It will take advantage of the great tools Firefox has to offer, as it is an extension which contains a WebGL implementation, providing rich user-experience, fun interaction and useful information, while taking full advantage of 3D hardware acceleration, GLSL shaders and what OpenGL ES 2.0 has to offer. The implementation consists of a Firefox extension containing a 3D representation of a web page, as both a fun visualization tool and a developer-friendly environment for debugging the document’s structure, contents and nesting of the DOM tree. Requirements: Firefox Demo: License: Mozilla Public License

To Create Long-term Shareholder Value, Start with Employees - Kenneth W. Freeman by Kenneth W. Freeman | 12:38 PM October 12, 2011 This blog post is part of the HBR Online Forum The CEO’s Role in Fixing the System. When I first became head of MetPath in 1995, a troubled Corning subsidiary that eventually became Quest Diagnostics, I dropped in on what was one of the largest clinical testing laboratories in the U.S. As I walked the halls, I found that almost no one would look me in the eye. Something was clearly wrong. The attrition rate turned out to be 45%. As Raymond Gilmartin writes, people work not just for money but also for meaning in their lives. That would require, as Dominic Barton observes, balancing financial metrics with measures that track the ability to forge internal alignment. Why employee satisfaction and not customer satisfaction? That means not only treating all employees with dignity, respect, and fairness but also helping them see how critical they are to the enterprise. Eventually, the voluntary attrition rate fell to approximately 10%.

Cost effective Webcam eye tracking surveys | EyeTrackShop Four Strategy Gurus to Avoid - Scott Anthony by Scott Anthony | 3:29 PM October 12, 2011 About a year ago I miscalculated — badly — on the Microsoft Kinect. In terms of speed of adoption, only Apple’s iPad has rivaled the Kinect. Aside from some tough comments on my blog, the long-term repercussions were low. That’s pretty much what happens to a pundit who gets it wrong — nothing. Life is tougher for the strategist. The non-user. The projector. The freeze framer. The opiner. As an occasionally unhelpful pundit myself, I hope I’ve helped you dodge these dangerous characters — or at least put their opinions into perspective.

Design Nav Bar for Web Daniel Alves is the design director for the small business web design division at the digital marketing and web design company 352 Media Group. The navigation bar is the most important design element on a website. Not only does it guide your users to pages beyond the homepage, but it’s also the singular tool to give users a sense of orientation. Despite the necessity of an accessible navigation bar, usability studies on navigation across the web aren’t positive. So how do you ensure that your users are able to quickly and easily find the information they need? The Basics Employ these basic concepts to help users move more efficiently through your website. Start with content. It’s important to properly analyze and organize all your content into a logical and highly usable structure before even considering design choices. Don't overwhelm. Keep it simple. Actions on the right. Avoid Flash, for the most part. One-Level Navigation Bars Apple vs. Drop-Down Multi-Level Navigation Bars Denny's vs.

Sending the Questions to the Data As hospitals and practices form accountable care organizations, they will accelerate their efforts to build healthcare information exchanges and novel analytics that support community-wide lifetime care rather than siloed episodic care, This requires "freeing the data" from the EHRs, hospital information systems, and laboratories in which it resides. There are two basic ways to analyze data for a panel or population. 1. Send the data from multiple sources to a central repository for analysis. BIDMC has partnered with the Massachusetts eHealth Collaborative on such an approach to build a quality data center supporting its ACO strategy. 2. The new federal Query Health initiative is a standards-based approach that enables standardized questions to be sent to multiple federated databases without moving the data itself. In Massachusetts, we've implemented such an architecture in two ways. There is great synergy among i2b2, PopMedNet and MDPHnet, since they use a common architectural approach.

Computer-based safety surveillance and patient-centered health records -- Ohno-Machado 19 (1): 1 Journal of the American Medical Informatics Associationjamia.bmj.com 2012;19:1 doi:10.1136/amiajnl-2011-000673 Highlights There is much debate on which types of computer-based systems have the most impact in healthcare delivery and patient outcomes. Safety surveillance systems, which have been around for several years, are probably at the top of the list. These provider-oriented clinical decision support systems allow healthcare providers to monitor the safety of medications and other interventions that are critical to prevent poor outcomes. Safety surveillance systems A perspective by Coiera et al (see page 2) reviews the main developments in safety surveillance in the USA and abroad, highlighting opportune areas that remain uncharted.

UXmatters :: Insights and inspiration for the user experience community