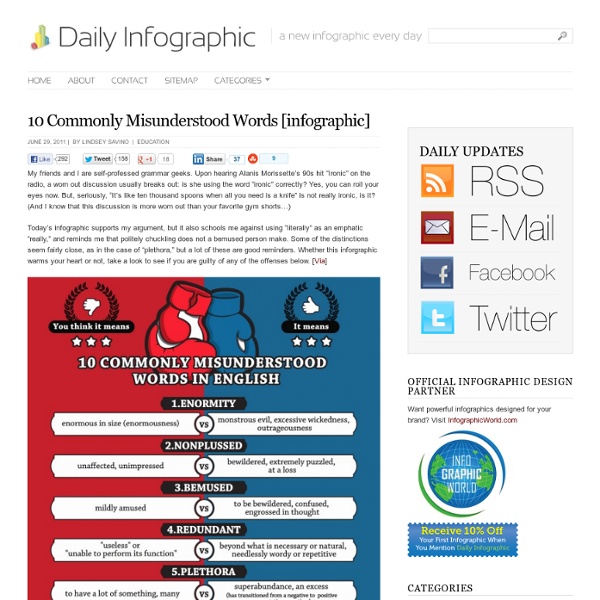 My friends and I are self-professed grammar geeks. Upon hearing Alanis Morissette’s 90s hit “Ironic” on the radio, a worn out discussion usually breaks out: is she using the word “ironic” correctly? Yes, you can roll your eyes now. Today’s infographic supports my argument, but it also schools me against using “literally” as an emphatic “really,” and reminds me that politely chuckling does not a bemused person make. Share This Infographic Get Free Infographics Delivered to your Inbox

16 Facts About Sleep In order to start the week off right, I thought I would share an infographic very appropriate for a Monday, one entitled “16 Things You Didn’t Know About Sleep.” As I write this I think about how amazing sleep is and of those mornings when sleep is just too appealing to pass up. As we all know sleep is essential to life. Sleeping works better than any medicine or home remedy, sleeping is the cure-all. One interesting tidbit that you may be unaware of which this infographic suggests is that color television has actually affected the way people dream. As a college student I now realize the importance of sleep. Share This Infographic Get Free Infographics Delivered to your Inbox

Cool Infographics - Blog Cisco Reminds Us Once Again How Big The Internet Is Getting - Arik Hesseldahl - Enterprise One of the well-worn buzz phrases in tech that re-surfaces from time to time is “The Internet of Things.” When I first encountered it, it was in 2002, and it was used in the title of this story in Forbes about the use of RFID chips by retailers like Wal-Mart to track inventory. Nine years later it draws a big yawn. Now it seems the networking giant Cisco Systems has appropriated it to mean something else entirely, something a lot more meaningful in the larger context of the Internet. The way Cisco sees it, the number of devices connected to the Internet exceeded the number of people populating the entire planet. And that’s not just smartphones and tablets. Of course, Cisco would like you to associate its brand with these kinds of big thoughts rather than its more workaday corporate troubles. Getting to that utopia will also require completing the transition from IPv4 to IPv6.

Top 3 Reasons to Spice Up Language Learning Evernote, the cross-platform note-taking and archiving service that helps users “remember everything”, is growing and expanding into the educational community. In particular, it has caught the eye of many language learners who, quite simply, want nothing more than to “remember everything” they have learned in and about their foreign languages of study. If you find yourself struggling with the Russian alphabet or German syntax, here are the top 3 reasons to spice up your own language learning odyssey with Evernote. 1. Where There are Language Learning Opportunities, There is Evernote Evernote works by syncing all of your computers and mobile devices through a single account. 2. Long gone are the days when bookmarking was the best way to keep track of your top-100-websites-to-revisit-before-they-get-buried-under-another-100-links. 3. At Voxy, we are currently building an iPhone appthat allows users to learn English in the “privacy of their own phone.” (Visited 1,433 times, 2 visits today)

Instant Hacking This is a short introduction to the art of programming, with examples written in the programming language Python. (If you already know how to program, but want a short intro to Python, you may want to check out my article Instant Python.) This article has been translated into Italian, Polish, Japanese, Serbian, Brazilian Portuguese, Dutch, Czech, and Belarusian. This page is not about breaking into other people’s computer systems etc. I’m not into that sort of thing, so please don’t email me about it. Note: To get the examples working properly, write the programs in a text file and then run that with the interpreter; do not try to run them directly in the interactive interpreter — not all of them will work. To program in Python, you must have an interpreter installed. Programming a computer means giving it a set of instructions telling it what to do. Of course, no computer would understand this… And most computers wouldn’t be able to make a salad even if they did understand the recipe.

The Forex Market Explained Although the stock market gets all the publicity, trading currencies in the Forex market is a little different than trading a regular company’s stock. The Forex market trades currency and trading goes on for 24 hours during 5.5 days-a-week. These hours of operation mean that the Forex market trades in 1 day what Wall St. trades in a month. Right now the US dollar is not as strong as it used to be. How stable the country is and how well tourism is going are some deciding factors for the value of a country’s currency. The Forex market can be a bit simpler than Wall St because of a limited number of popularly traded currencies. Share This Infographic Get Free Infographics Delivered to your Inbox