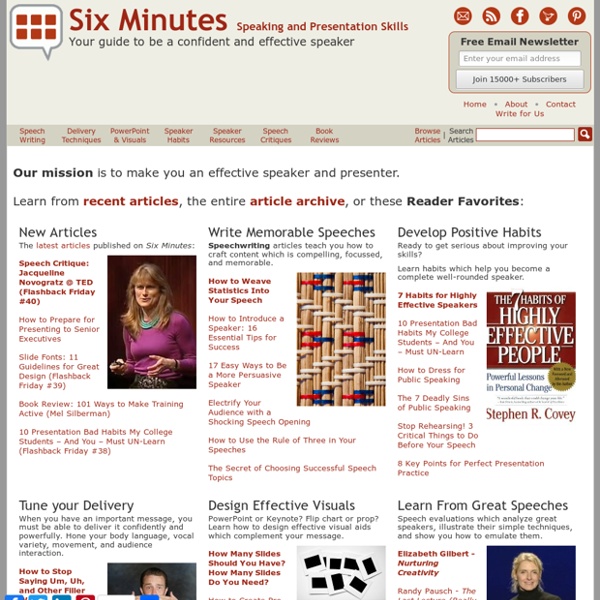 7 Lessons From the World's Most Captivating Presenters [SlideShare] It’s 7:54 on a frigid January morning in San Francisco. You’re waiting outside the Moscone Center, in a queue of several thousand people, many of whom have been camping out in the cold for over 12 hours. The security detail for this event rivals the Democratic National Convention. 100 Self Growth Articles For Making Yourself Better The problem with the internet isn’t that there’s not enough information. The problem is to find it. There are incredible writers today who have written (probably) everything there is to know about living well. It would be shame not to share some of their best work with you. No need to read everything, pick topics that resonate the best with you. Bookmark this page and come back later.

Why Work Sucks And How To Fix It Posted by: Michelle Conlin on June 02, 2008 A year and a half ago, I wrote a cover story about a radical workplace experiment roiling Best Buy’s headquarters in Minneapolis. Two guerrila HR types had secretly started a stealth mission to free Best Buyers from what many at the company referred to as “butt-in-chair” syndrome. The two HR bomb throwers argued that employees should be measured on output, not hours. And that the face-time culture was utterly out of place in the digital age. Their ultimate underground project—one in which you never had to darken the doors of the workplace if you didn’t want to—radically changed the culture at Best Buy. Designing Presentations to Work Across Multiple Platforms Presentations have gained a lot of prominence recently. As a matter of fact, they have taken on a life of their own. They’ve gone far beyond the scope of what presentations originally meant: Conveying an idea or demonstrating a product to a live audience. Visuals that used to serve as an explanatory aid to a speaker (not to mention the speakers who used/abused them as a teleprompter) have long since evolved into standalone slide shows.

How neuroscience beats PowerPoint coma By Dr Andi Horvath We’ve all experienced — and inflicted — the condition known as Death by PowerPoint. But there is a cure: Mix neuroscience with design with education theory and practice. Jared Horvath’s academic passion is translating the knowledge of neuroscience to enhance classroom teaching and learning. Personal Development Articles The Courage To Live Consciously - Rediscover the virtue of courage, and embrace the person you always wanted to be. Spirituality vs. Intelligence - Must we choose to embrace either spirituality or rationality but never both at the same time? Life After Death - What can an intelligent understanding of death teach you about how to live?

45 Must-See Incredible Resources And Inspirational Collection To Discover The Best Of The Web In January Don't Forget to participate in a contest where you can win an amazing e-Commerce template from TemplateMonster. We are always in search of great free resources, tips, tricks, etc. for our readers. Every day we work hard to find new resources and inspiration for designers like you. Using Eye Contact to Connect With Your Presentation Audience {*style:<i><b> Editor’s Note: </b> You’ve prepared for weeks (if not months) researching, gathering, and designing your content, but it all comes down to the minutes you spend delivering it to your audience.

How to Apply Eames's Legendary "Powers of 10" to Real-life Problems This October 10, 2010 is Powers of Ten day -- 10/10/10, a milestone on the design thinking calendar. It's named for the film Powers of Ten, made by Charles and Ray Eames in 1968. And for designers, it's an opportunity to both celebrate the Eames Office's groundbreaking film as well as a chance to recognize the power of scale in shaping our understanding of the world around us. There will be festivities around the world. Check out the Powers of Ten website, as well as the powersof10 blog that lists some events.

7 Public Speaking Tips From the World's Best Speakers & Presenters [SlideShare] It’s 7:54 on a frigid January morning in San Francisco. You’re waiting outside the Moscone Center, in a queue of several thousand people, many of whom have been camping out in the cold for over 12 hours. The security detail for this event rivals the Democratic National Convention. Another hour passes before you’re comfortably seated in a giant auditorium that’s crackling with anticipation. Finally, at 9:43 a.m., the moment you’ve been waiting for arrives. What you want is never a thing He definitely thought nobody was around, but the four of us could see his self-consciousness from across the lot even before he parked. He pulled up, popped the trunk, and left the engine running. He was about five feet tall. From our distance he looked like a sweater with a beard.

Home-built "Bio Computer" runs Linux, grows wheatgrass We've seen the wacky homebrew projects of computer hardware hacker Mike Schropp before. Mindful Gizmag readers may recall his triple quad-core i7 LEGO PC housing that we looked at last July. But his latest project, the "Bio Computer," is rather more oddball, taking a turn distinctly towards the horticultural with a PC case adapted to ... grow wheatgrass. "I'm not complaining by any means, but I do feel as my basement becomes populated with more and more tech based projects that the environment is missing something organic, something natural to balance things out," writes Schropp, on his website, Total Geekdom.

Alternatives to PowerPoint By Jon Every Tuesday I publish a short post with quick, consumable presentation tips. Here is Tip #6. While I am clearly a fanboy of Apple, as I write this on my MacBook Pro, my slideware of choice is actually Microsoft PowerPoint. I do have Apple’s Keynote on here, but I have never come across a compelling reason to use Keynote instead of PowerPoint. (Do you have one?) Introduction to the Middle Way Method I want to introduce you to The Middle Way Method, an organizational system I created and have been using to keep me and my projects on task. In 2006, I decided to learn how to be more effective with planning. I had tried a few planning systems, and while they all had something I found useful, not fit my lifestyle or personality perfectly.

Blog with lots of resources on public speaking and presenting. Includes not only tipps and tricks, but also book reviews, articles, examples of great speeches, and provides links to other public speaking blogs. by annarubinowski Nov 12