Who Invented Eyeglasses? - Who was Glasses Inventor? There are many dilemmas about invention of glasses. 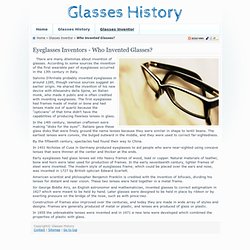 According to some sources the invention of the first wearable pair of eyeglasses occurred in the 13th century in Italy. Salvino D'Armate probably invented eyeglasses in around 1285, though various sources suggest an earlier origin. He shared the invention of his new device with Allesandro della Spina, an Italian monk, who made it public and is often credited with inventing eyeglasses. The first eyeglasses had frames made of metal or bone and had lenses made out of quartz because the ''opticians'' of that time didn't have the capabilities of producing flawless lenses in glass. In the 14th century, Venetian craftsmen were making "disks for the eyes"'. Collect, curate and share your ideas, inspirations, and projects! OurStory.com - Capture your stories, save them permanently. Share Photos, Videos, Text, Music and Documents Easily.