3 common public-speaking blunders—and how to overcome them. Why the world's leading companies are failing the authenticity test  - Agility PR Solutions. By Bulldog Reporter on September 18th, 2017 | 0 Comments Achieving authenticity is among brand PR’s biggest challenges—it’s more of an organic metric that you can’t easily plan for or build strategy around. 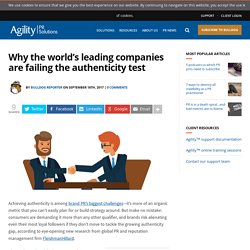 But make no mistake: consumers are demanding it more than any other qualifier, and brands risk alienating even their most loyal followers if they don’t move to tackle the growing authenticity gap, according to eye-opening new research from global PR and reputation management firm FleishmanHillard. Are you a Star of PR? Don't miss out - Late entries for the Bulldog Stars of PR awards are still being accepted. Enter in Individual and Agency categories. The study, Authenticity in an Uncertain World, uncovers a surprising number of gaps between what consumers now expect of a brand and what they actually experience. “Companies must embrace this new reality, operate in transparent and authentic ways and align all aspects of their business with what the consumer expects,” Benzkofer said.

Erase these 15 flaws from your speeches. 6 common yet avoidable presentation flaws. Five Strategies To Help You Sound Like The Leader You Want To Be. What you can learn from an outstanding TED talk. TED talks offer great takeaways for speakers. 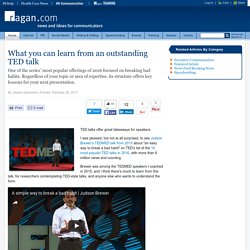 I was pleased, but not at all surprised, to see Judson Brewer's TEDMED talk from 2015 about "an easy way to break a bad habit" on TED's list of the 10 most popular TED talks in 2016, with more than 6 million views and counting. Brewer was among the TEDMED speakers I coached in 2015, and I think there's much to learn from this talk, for researchers contemplating TED-style talks, and anyone else who wants to understand the form. Here are six things that make this talk work well: 1. Time management: Clocking in at 9 minutes, 16 seconds, Brewer's talk is complex and compact. [DOWNLOAD: 8 types of CEO videos that employees will want to watch.] 2. 3. 4. 5. 6.

A version of this article first appeared on The Eloquent Woman. (Image via) 5 ideas to jazz up your presentations. If your content is outstanding, it greatly improves the chances that your speech will be a success. 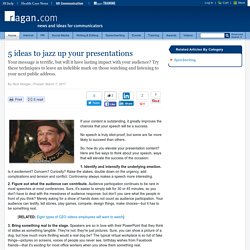 No speech is truly idiot-proof, but some are far more likely to succeed than others. So, how do you elevate your presentation content? Here are five ways to think about your speech, ways that will elevate the success of the occasion: 1. Identify and intensify the underlying emotion. 2. [RELATED: Eight types of CEO videos employees will want to watch] 3. 4. 5.

Using these ideas alone or in combination should help you pep up your presentation. A version of this article originally appeared on Public Words. (Image via) 3 fundamental elements of superb storytelling. The human mind is structured to remember stories, not facts, or things, or lists, or even ideas. 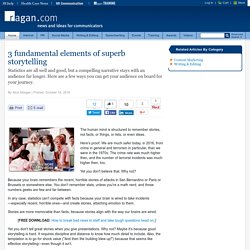 Here's proof. We are much safer today, in 2016, from crime in general and terrorism in particular, than we were in the 1970s. The crime rate was much higher then, and the number of terrorist incidents was much higher then, too. Yet you don't believe that. Why not? Because your brain remembers the recent, horrible stories of attacks in San Bernardino or Paris or Brussels or somewhere else. 5 Things Every Presenter Needs To Know About People. What standup comics can teach you about public speaking.

I know you have heard it a million times: Most people fear public speaking more than they fear death. 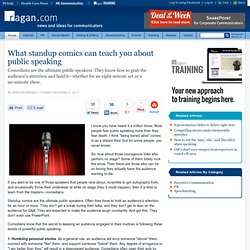 I think "being buried alive" comes in as a distant third (but for some people, you never know). So, how about those courageous folks who perform on stage? Some of them totally rock the show. Then there are those who can be so boring they actually have the audience wanting to die. If you want to be one of those speakers that people rave about, scramble to get autographs from, and occasionally throw their underwear at while on stage (hey, it could happen), then it is time to learn from the masters—comedians. Standup comics are the ultimate public speakers. Comedians know that the secret to keeping an audience engaged in their routines is following these tenets of powerful public speaking: 1. 2. 9 Ways to Remember Your Presentation. 5 presentation tips from TED's executive producer. I am a TED fanatic. 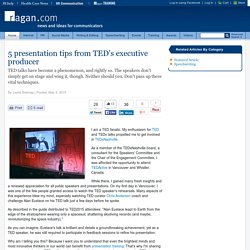 My enthusiasm for TED and TEDx talks propelled me to get involved in TEDxNashville. As a member of the TEDxNashville board, a consultant for the Speakers' Committee and the Chair of the Engagement Committee, I was afforded the opportunity to attend TEDActive in Vancouver and Whistler, Canada. While there, I gained many fresh insights and a renewed appreciation for all public speakers and presentations. On my first day in Vancouver, I was one of the few people granted access to watch the TED speaker's rehearsals. Many aspects of this experience blew my mind, especially watching TED curator Chris Anderson coach and challenge Alan Eustace on his TED talk just a few days before he spoke. As described in the guide distributed to TED2015 attendees: "Alan Eustace leapt to Earth from the edge of the stratosphere wearing only a spacesuit, shattering skydiving records (and maybe, revolutionizing the space industry).

" Why am I telling you this?