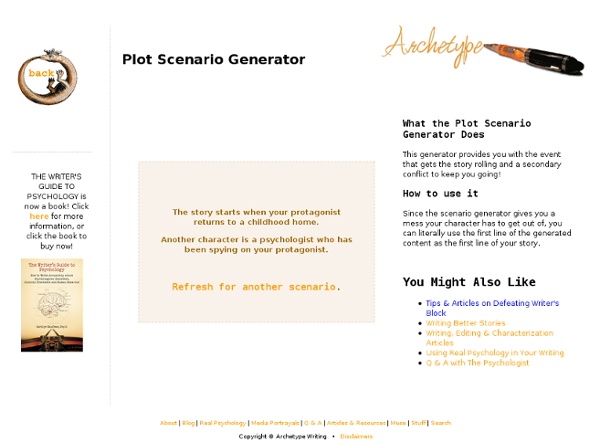 Cheat Sheets For Writing Body Language Translate emotions into written body language We are always told to use body language in our writing. Sometimes, it's easier said than written. I decided to create these cheat sheets to help you show a character's state of mind. Obviously, a character may exhibit a number of these behaviours. Expressions & Sayings Index If you prefer to go directly to the meaning and origin of a specific expression, click on its relevant entry in the alphabetical list below. Use this alphabet to speed up your search: A B C D E F G H I J K L M N O P Q R S T U V W X Y Z

102 Resources For Fiction Writing UPDATE 1/10: Dead links removed, new links added, as well as Revision and Tools and Software sections. Are you still stuck for ideas for National Novel Writing Month? Or are you working on a novel at a more leisurely pace? Here are 102 resources on Character, Point of View, Dialogue, Plot, Conflict, Structure, Outlining, Setting, and World Building, plus some links to generate Ideas and Inspiration. Also, I recommend some resources for Revision and some online Tools and Software. Things Writers Should Know Previous iterations of the “25 Things” series: 25 Things Every Writer Should Know 25 Things You Should Know About Storytelling

How to Write Screenplays Using Microsoft Word: 9 steps Edit Article Edited by Moneybox35, Teresa, BW, Antarctica and 11 others Why should you pay hundreds of dollars for script writing software when you already own the most powerful program out there: Microsoft Word! We'll accomplish this through something called macros, which are programmable shortcut buttons. We will program them by recording the actions we want them to do. Physical Descriptions - List of Hair Colors Hair Color List (Note: an updated and expanded version of this list appears in my 15K-word book How to Describe Hair and Skin. See below.) [First, my profound apologies to the vast majority of readers who don't steal content, but I have to state the following. This article and all content on this website belongs to Val Kovalin, copyright © Obsidianbookshelf.com, except where noted.

Character meme fun! This is how I was procrastinating during the exam period. "Post-processual theory? ...After I've cleared out my hard drive, I think... ... ooh! What's this? A daft questionnaire I saved from somewhere on the Internet? I must fill it in." 11 questions that only mean something in Ireland SERIOUSLY. IN ANY other country, you’d get some fierce blank looks. It’s a special kind of Irish nonsense. 1. “Who’s yer wan?” An expression of contempt or genuine enquiry, depending on the facial expression used when speaking.

To My Old Master In 1864, after 32 long years in the service of his master, Jourdon Anderson and his wife, Amanda, escaped a life of slavery when Union Army soldiers freed them from the plantation on which they had been working so tirelessly. They grasped the opportunity with vigour, quickly moved to Ohio where Jourdon could find paid work with which to support his growing family, and didn’t look back. Then, a year later, shortly after the end of the Civil War, Jourdon received a desperate letter from Patrick Henry Anderson, the man who used to own him, in which he was asked to return to work on the plantation and rescue his ailing business. Shakespeare Insult Kit Shakespeare Insult Kit Since 1996, the origin of this kit was listed as anonymous. It came to me on a piece of paper in the 90's with no attribution, and I thought it would make a cool web page.

Free Resources for Writers and Poets KathySteinemann.com has been named one of the Top 100 Best Websites for Writers, 2019. Many thanks to Dana Sitar, Jessica Lawlor, and the other folks behind the scenes at The Write Life. I’m thrilled that you honored my site again. According to Thomas Fuller, the devil lies brooding in the miser’s chest. The 100 Most Important Things To Know About Your Character (revised) Quote from original Author(Beth):This list came about when, one day while struggling to develop a character for an upcoming Hunter game, my lovely roommate Nikki looked at me and said something like, "Wouldn't it be cool to have a list of questions you could go through and answer while you were making characters, so you'd make sure to consider all sorts of different elements in their personality?" I agreed, and that very evening we sat down over hot chocolate and ramen noodles to whip up a list of 100 appearance-, history-, and personality-related questions (which seemed like a nice even number) to answer as a relatively easy yet still in-depth character building exercise. Later on, we went through the list again, took out the questions that sucked (because there were a lot of them) and replaced them with better ones. What you see before you is the result of that second revision.

I want to invite you guys to a great group on Linked In called mold inspectors and mold remediators where we talk about so many different things. Please come join us. We will even leave the light on for you ok? David Snell for Snell Experts www.snellexperts.com by snellexperts Jul 24

I tried it and it is working here, are you still having problems? by bcmltt Jul 24

I double clicked and it worked. by hhdavid Jul 22

I just tried it a second ago and it does work. by disneydreamer_92 Jul 22