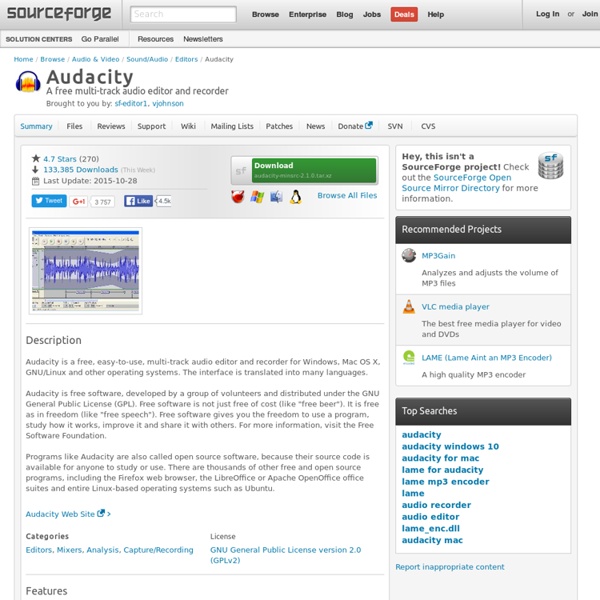 ★ 4.8 Stars (258) 128,914 Downloads (This Week) Last Update: Download audacity-minsrc-2.1.0.tar.xz Browse All Files BSD Windows Mac Linux Audacity is a free, easy-to-use, multi-track audio editor and recorder for Windows, Mac OS X, GNU/Linux and other operating systems. Audacity is free software, developed by a group of volunteers and distributed under the GNU General Public License (GPL). Programs like Audacity are also called open source software, because their source code is available for anyone to study or use. Audacity Web Site Record live audioRecord computer playback on any Windows Vista or later machineConvert tapes and records into digital recordings or CDsEdit WAV, AIFF, FLAC, MP2, MP3 or Ogg Vorbis sound filesAC3, M4A/M4R (AAC), WMA and other formats supported using optional librariesCut, copy, splice or mix sounds togetherNumerous effects including change the speed or pitch of a recordingAnd more! 4.8 out of 5 stars ease 1 of 5 2 of 5 3 of 5 4 of 5 5 of 5 4 / 5 End Users/Desktop

Wink - [Homepage] Here is a sample Flash tutorial created by Wink. Click the green arrow button to start viewing it. --------> This is a good example of how you can create tutorials in Wink, by capturing screenshots, mouse movements and specifying your own explanations with them. And all this in a standard Windows-based UI with drag-and-drop editing makes it very easy to create high quality tutorials/documentation. Philco radio. Model 42-350 (1942). Model 42-350 is a seven (7) tube superheterodyne radio designed for reception of standard, shortwave and Frequency Modulation broadcast stations, and the sound of a television program tuned in by special Philco Television Radios. The radio Incorporates six electric push-buttons for automatically tuning five stations in the standard broadcasting band. Philco built-in:

Adobe Illustrator CC new features Touch Type tool Design with type by manipulating characters like individual objects. Move, scale and rotate text, and still change the font or edit at any time. Accessibility This page discusses accessibility issues in Audacity for visually- and motion-impaired users. Technical support for visually impaired users is provided on the audacity4blind mailing list. Keyboard shortcuts A large number of keyboard shortcuts are available for those who can't use a mouse, and for those who find it quicker to use the keyboard.

Free Mind From FreeMind The latest stable release of FreeMind is 1.0.0. Downloading and installation instructions are given below. Installing FreeMind FreeMind is written in Java, so it will run on almost any system with a Java runtime environment. Provos, Loyalists and Brits A trilogy of Documentary Series on Northern Ireland Conflict - Provos, Loyalists and Brits. BBC documentary series looking at the history of the IRA and Sinn Fein over the past 30 years, an intimate account of the lives of loyalist paramilitaries and the role of the British armed forces in Northern Ireland, made by journalist Peter Taylor. Provos: Born Again.

Photoshop The 2015 release of Photoshop CC is here! Create anything you can imagine with new design and photography features. New Linked Assets in your Creative Cloud Libraries let you edit an asset once and have it update across any Photoshop, Illustrator or InDesign projects where it’s used. Plus, you can use artboards to make UI/UX and responsive web design easier than ever, create more realistic blurs with additive noise, and much more. Atomic Learning: Audacity 2.0.3 Training Skip to content Skip to navigation Skip to login Beginning of dialog content User Settings End of dialog content Log In opens form dialog Help FAQ

Dia a drawing program Welcome to Dia's new homepage. Dia is a GTK+ based diagram creation program for GNU/Linux, MacOS X, Unix, and Windows, and is released under the GPL license. Dia is roughly inspired by the commercial Windows program 'Visio,' though more geared towards informal diagrams for casual use. Edgar Award: Best Fact Crime 2015: Tinseltown: Murder, Morphine, and Madness at the Dawn of Hollywood by William Mann (Winner)Kitty Genovese: The Murder, the Bystanders, the Crime that Changed America by Kevin CookThe Savage Harvest: A Tale of Cannibals, Colonialism, and Michael Rockefeller’s Tragic Quest for Primitive Art by Carl HoffmanThe Other Side: A Memoir by Lacy M. JohnsonThe Mad Sculptor: The Maniac, the Model, and the Murder that Shook the Nation by Harold Schechter 2014: The Hour of Peril: The Secret Plot to Murder Lincoln Before the Civil War by Daniel Stashower (Winner) Duel with the Devil: The True Story of How Alexander Hamilton and Aaron Burr Teamed Up to Take on America’s First Sensational Murder Mystery by Paul Collins Mortal Sins: Sex, Crime, and the Era of Catholic Scandal by Michael D’Antonio The Good Nurse: A True Story of Medicine, Madness and Murder by Charles Graeber The Secret Rescue: An Untold Story of American Nurses and the Medics Behind Nazi Lines by Cate Lineberry

GameMaker: Studio Last updated: 02/04/2019 We (meaning YoYo Games Limited, company number 05260718) use technologies on our website and mobile services (which we'll call the Services) to collect information that helps us improve your online experience. We refer to these technologies, which include cookies, collectively as “cookies.” This policy explains the different types of cookies used on the Services and how you can control them. Podcasting: Audio on the Internet comes of age * On the Internet * Podcasting: Audio on the Internet comes of age Graham Stanley The British Council Barcelona, Spain Podcasting, a catchy combination of the words iPod and broadcasting, is in vogue at the moment, and everyone who came late to the blogging party wants a piece of the action. If blogging is becoming the tool of choice for many writing instructors bent on giving a real world spin to their classes, then podcasting could be just the ticket for language teachers looking to extend the reach of their classrooms.