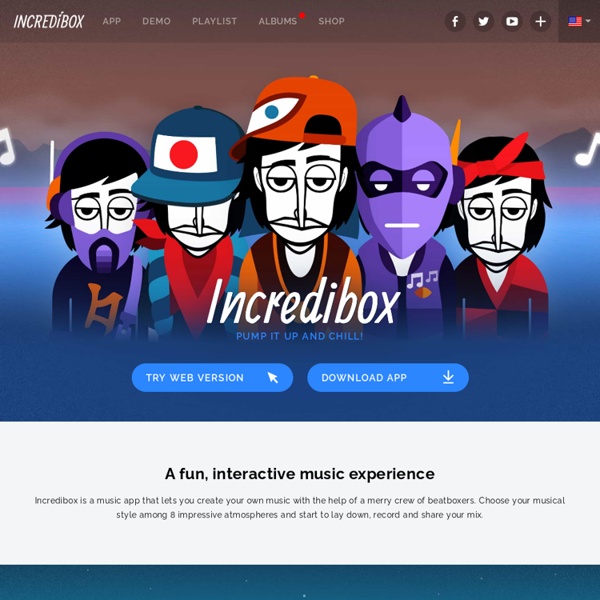 Anti Joke What are Antijokes? Anti Jokes (or Anti Humor) is a type of comedy in which the uses is set up to expect a typical joke setup however the joke ends with such anticlimax that it becomes funny in its own right. The lack of punchline is the punchline. We’ve just released huge update to the iOS app! make music together let's get started making music... 1draw on the grid with your mouse to make a beatshow me2 save your track and share it with friends. show me3 out of ideas? roll the dice and start remixing. show me4 explore the beatlab community show me For more tips, tutorials vidoes, and FAQs, check out our community wiki. You can use the following keyboard shortcuts while composing a track.

Lamborghini Madura by Slavche Tanevski & Yanko Design One Sharp Black Lambo From the darkest depths of the design mind of the one called Slavche Tanevski comes THIS! The Lamborghini *Ankonian. It’s black. It’s sharp. The Desktop Wallpaper Project by The Fox Is Black The Desktop Wallpaper Project was started by The Fox Is Black in March of 2008 as a way to share original art with my readers. The wallpapers are updated each Wednesday, featuring pieces from the most talented illustrators, designers, and photographers from around the world. Page 1 of 8 Next

20 Cool Pictures of Earth from Space ~ Cool Pictures 20 cool pictures of Earth from Space thanks to National Geographic and a collection of amazing photographers. Bombetoka BayPhotograph courtesy Terra/ASTER/NASA and NASA Earth Observatory Sapphire waters tinged with pink sediment seem to get tangled amid emerald vegetation in a satellite picture of Bombetoka Bay, on the northwestern coast of Madagascar. To celebrate Earth Day—which today received the ultimate Internet accolade, a Google Doodle—National Geographic photo editors selected 20 of the most stunning pictures of Earth, as seen from space, including this jewel-toned shot of the island country off the African coast.

18 Things To Do Before You Turn 18 Turning 18 is the first major milestone most of us will have to look forward to. When you're a teenager, nothing seems as important, as big as turning 18, once and for all. It's the final frontier between you and adulthood, between being considered a child and being an adult. Despite all the hype, most of the time, things don't really change that much, nonetheless, you may as well squeeze as much into life while you're young. Here are 18 things to do before you turn 18: 1) Go to a festival. Miegakure: A puzzle-platforming game in four dimensions Miegakure is a platform game where you navigate a four-dimensional world to perform miraculous feats and solve puzzles. Miegakure is a puzzle-platforming game that lets you explore and interact with a four-dimensional world. The fourth dimension in this game works just like the first three: it is a mathematical generalization. Your ability to move in the fourth dimensions in addition to the usual three allows you to perform miraculous feats like seeing inside closed buildings, walking through walls, stealing objects from closed containers, binding two separate rings without breaking them, etc... These actual consequences of the mathematical formulation of 4D space have been thought about for more than a century (in the 1884 novella Flatland for example) but it is the first time anyone can actually perform them, thanks to the video game medium. Our world is three-dimensional: width, depth, and height.