Muhammad Ali’s Greatest Victory Came When He Didn’t Fight. Ali chose not to because he was sincerely opposed to the Vietnam War—which he rightly saw as an imperialist adventure—and indeed to all war. 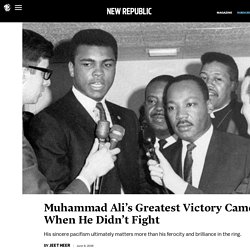 The sincerity of his pacifism was affirmed by the Supreme Court in an 8-0 decision. (The ninth justice, Thurgood Marshall, recused himself because he had belonged to the NAACP, which supported Ali in the case. Marshall would almost certainly have agreed with the other eight justices.) More importantly it was affirmed by Ali’s own actions, by the fact that he risked a jail sentence of five years and lost millions of dollars and three-and-a-half of his prime years as a champion boxer. Writing in The Nation, Dave Zirin rightly sees Ali as an essential figure who brought together the black liberation movement with the anti-war movement, forging a path followed by Martin Luther King, Jr. who came out against the Vietnam War a year after Ali.

When Muhammad Ali Refused to Go to Vietnam. Muhammad Ali’s stand against the Vietnam War transcended not only the ring, which he had dominated as the undisputed heavyweight champion of the world, but also the realms of faith and politics. 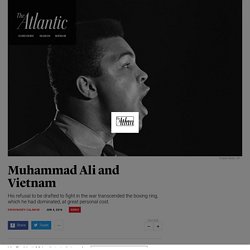 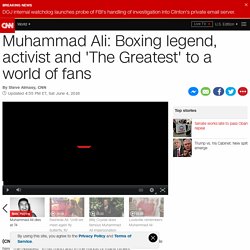 At the same time, he goaded a stubborn, hard-nosed society with his stinging jabs against pervasive racism. He is survived by his nine children, including daughter Laila, who, like her father, became a world champion boxer; and his fourth wife, Lonnie. Ali was known in the ring for his lightning hand speed -- unusual for a heavyweight -- for his showmanship and for his brashness and braggadocio when a microphone was put before him. He taunted opponents before matches, trash-talked them during and proclaimed his greatness to reporters afterward.

"Just Take Me to Jail": Remembering Muhammad Ali's Refusal to Fight in Vietnam. This is a rush transcript. 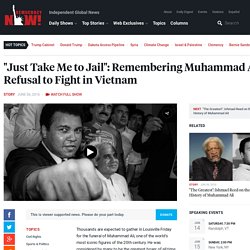 Copy may not be in its final form. AMY GOODMAN: Thousands are expected to gather in Louisville on Friday for the funeral of Muhammad Ali, one of the world’s most iconic figures of the 20th century. He was considered by many to be the greatest boxer of all time, but he will also be remembered for his activism against racism and war. He died Friday in Arizona after suffering for decades from Parkinson’s syndrome.

Muhammad Ali refuses to fight in Vietnam War. (Boxing is nothing like going to war with machine guns, bazookas, hand grenades, bomber airplanes. 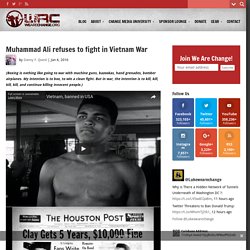 My intention is to box, to win a clean fight. But in war, the intention is to kill, kill, kill, kill, and continue killing innocent people.) Heavyweight boxing champion Muhammad Ali (1942-2016) was outspoken about many political issues, including his opposition to the Vietnam War. Ali was drafted in 1966 and called up for induction in 1967, however he refused to answer to his name or take the oath. Muhammad Ali explains his refusal to fight in Vietnam (1967)

The webserver at Alpha History tells us you’re using an adblocking tool, plug-in or browser extension on your computer or network. 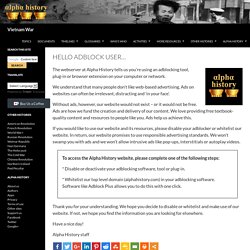 We understand that many people don’t like web-based advertising. Ads on websites can often be irrelevant, distracting and ‘in your face’. Without ads, however, our website would not exist – or it would not be free. Muhammad Ali took a stand and suffered for it. That&apos;s what made him great. To the editor: The term “sports hero” is widely used but rarely appropriate. 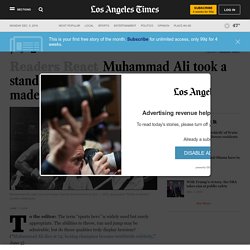 The abilities to throw, run and jump may be admirable, but do those qualities truly display heroism? (“Muhammad Ali dies at 74; boxing champion became worldwide celebrity,” June 3) Muhammad Ali refuses Army induction - Apr 28, 1967. Also on this day Lead Story On this day in 1945, “Il Duce,” Benito Mussolini, and his mistress, Clara Petacci, are shot by Italian partisans who had captured the couple as they attempted to flee to Switzerland. 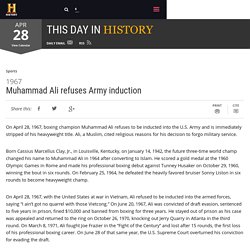 The 61-year-old deposed former dictator of Italy was established by his German allies as the figurehead of a puppet government... American Revolution.