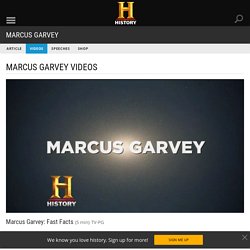 How much does it cost to access all of the video content? Accessing video content is free, however, you will need to verify your TV provider subscription by logging in in order to access all of our video content. Can I watch videos if my TV provider isn't currently supported? Yes! What kind of programming is available if I log in? You will get access to more full episodes than ever before. How often is new video added to the website? There will be new episodes and web exclusives added every day. 190 1781 6 1B 130 (1) (1) Marcus Garvey - Mini Biography. 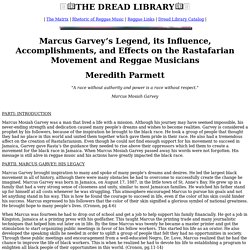 Although his journey may have seemed impossible, his never-ending strength and dedication caused many people’s dreams and wishes to become realities. Garvey is considered a prophet by his followers, because of the inspiration he brought to the black race. He took a group of people that thought they had no place in this world and united them together which gave them pride in their race. He also had a tremendous affect on the creation of Rastafarianism. 6051941. Marcus Garvey, "The Negro Moses" Marcus Garvey is regarded as the leader of the largest organized mass movement in black history and the progenitor of the modern Black Is Beautiful revival that reached its apogee in the 1960s and 1970s in the United States. 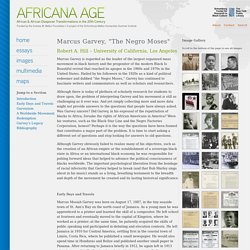 Hailed by his followers in the 1920s as a kind of political redeemer and dubbed “the Negro Moses,” Garvey has continued to fascinate writers and commentators as well as scholars and researchers. Although there is today of plethora of scholarly research for students to draw upon, the problem of interpreting Garvey and his movement is still as challenging as it ever was. And yet simply collecting more and more data might not provide answers to the questions that people have always asked. History - Marcus Garvey. Marcus Garvey and the Universal Negro Improvement Association, The Twentieth Century, Divining America: Religion in American History, TeacherServe, National Humanities Center. Marcus Garvey and his organization, the Universal Negro Improvement Association (UNIA), represent the largest mass movement in African-American history. 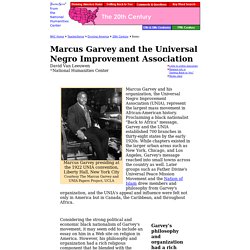 Proclaiming a black nationalist "Back to Africa" message, Garvey and the UNIA established 700 branches in thirty-eight states by the early 1920s. While chapters existed in the larger urban areas such as New York, Chicago, and Los Angeles, Garvey's message reached into small towns across the country as well. Later groups such as Father Divine's Universal Peace Mission Movement and the Nation of Islam drew members and philosophy from Garvey's organization, and the UNIA's appeal and influence were felt not only in America but in Canada, the Caribbean, and throughout Africa.Considering the strong political and economic black nationalism of Garvey's movement, it may seem odd to include an essay on him in a Web site on religion in America. Marcus Garvey - Black History. Born in Jamaica, Garvey aimed to organize blacks everywhere but achieved his greatest impact in the United States, where he tapped into and enhanced the growing black aspirations for justice, wealth, and a sense of community. 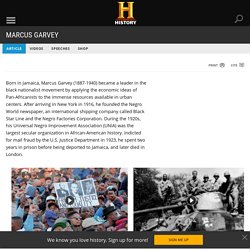 During World War I and the 1920s, his Universal Negro Improvement Association (UNIA) was the largest black secular organization in African-American history. Possibly a million men and women from the United States, the Caribbean, and Africa belonged to it. Marcus Garvey - Civil Rights Activist. Marcus Garvey was a proponent of the Black Nationalism and Pan-Africanism movements, inspiring the Nation of Islam and the Rastafarian movement. 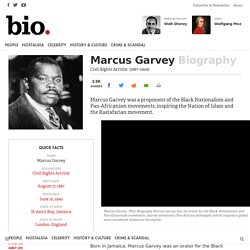 Synopsis Born in Jamaica, Marcus Garvey was an orator for the Black Nationalism and Pan-Africanism movements, to which end he founded the Universal Negro Improvement Association and African Communities League. Garvey advanced a Pan-African philosophy which inspired a global mass movement, known as Garveyism. Garveyism would eventually inspire others, from the Nation of Islam to the Rastafari movement. Early Life Social activist Marcus Mosiah Garvey, Jr. was born on August 17, 1887, in St.